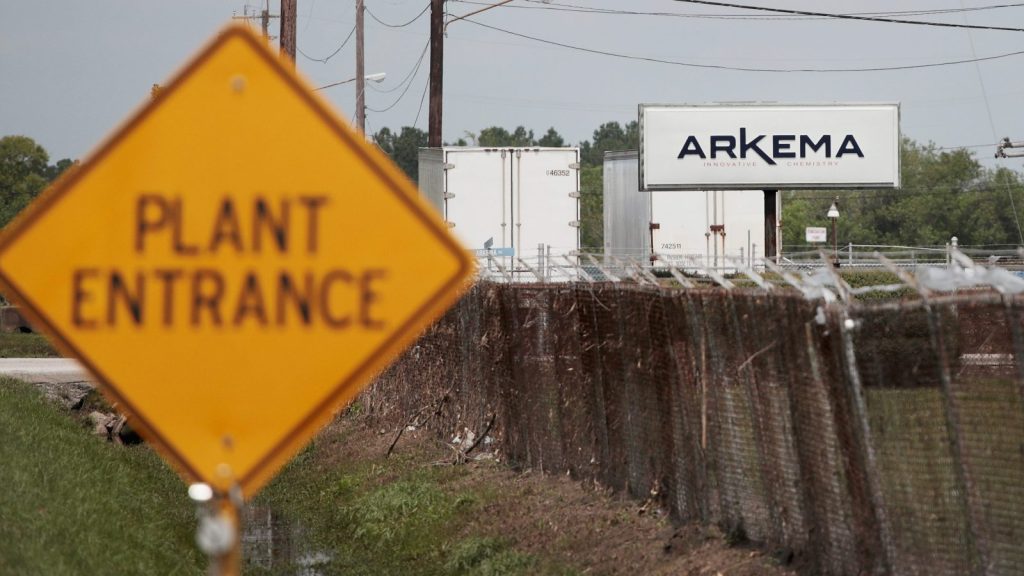 Hurricane Harvey struck southeast Texas last August with 130 mph winds and dumped more than 50 inches of rain across the region. In the aftermath of the second-costliest storm in recent American history, a Category 4 nightmare that left at least 88 Texans dead and forced thousands to flee into shelters, government agencies have finally begun reckoning with Harvey’s environmental cost. The storm contributed to the release of more than 8 million pounds of air pollution and more than 150 million gallons of wastewater.

Arguably no city was hit harder by the environmental devastation during the storm than Crosby, a 2.26-square-mile satellite of Houston with fewer than 3,000 residents. Chemicals left in refrigeration trailers at a plant owned by the multinational chemical manufacturer Arkema Inc. in the northeast part of town caught fire on August 31 and September 1, sending toxic clouds of smoke billowing into the air. More than 200 neighbors evacuated their homes, and 21 first responders sought medical treatment for the nausea, vomiting, and dizziness they experienced after exposure to the chemicals.

Along with hundreds of residents, those first responders have sued Arkema in a pair of class-action lawsuits for negligence, charging that the company did not properly safeguard its chemicals or inform the community of the “unreasonably dangerous condition” created by their release. Harris and Liberty counties have separately sued the company. Arkema has fiercely denied any wrongdoing, but now, a year after the disaster, its leaders may have more to worry about than fronting a huge payday for disgruntled residents.

On August 3, a Harris County grand jury indicted the company’s chief executive, Richard Rowe, and the Crosby plant’s manager, Leslie Comardelle, for “recklessly” releasing chemicals into the air and putting residents and emergency workers at risk. “Companies don’t make decisions, people do,” Harris County District Attorney Kim Ogg said in a statement. “Responsibility for pursuing profit over the health of innocent people rests with the leadership of Arkema.”

“These criminal charges are astonishing,” Arkema responded in a statement. “At the end of its eight-month investigation, the Chemical Safety Board noted that Hurricane Harvey was the most significant rainfall event in U.S. history, an Act of God that never before has been seen in this country.”

The series of fires at Arkema’s plant were far from the only environmental disasters to hit southeast Texas in Harvey’s wake. Matt Tresaugue, who studies air quality issues at the Environmental Defense Fund, says Arkema barely even cracked his top 10 list. More serious, he argued, was the cumulative impact of several lesser-known incidents across the region. But fairly or not, Arkema remains, for many people, the most public example of executive malfeasance in the face of environmental calamity during Harvey. Companies like Valero and Chevron, among many others, were sued over their actions during the hurricane, but only Arkema’s executives face possible criminal penalties.

Arkema was certainly not the only entity at fault during the storm, but in its lack of preparedness and defiant defense of its actions, the company struck residents — and Harris County prosecutors — as eager to prioritize its profits over safety. The firm’s history did not help.

The year before Harvey, Arkema was slapped with a nearly $92,000 fine after the Occupational Safety and Health Administration found 10 violations at the Crosby plant related to its handling of hazardous materials. Previous incidents, including the release of sulfuric acid in 1994 that left a 5-year-old girl with severe burns, led one Crosby resident to tell the Houston Chronicle she had “a bitter taste in [her] mouth about Arkema.”

Perhaps most troubling, Arkema has twice before faced civil penalties for improperly storing organic peroxides, the same chemicals that caught fire during Harvey. In 2006, the Texas Commission on Environmental Quality cited the Crosby plant for releasing 3,200 pounds of pollutants because a “pallet of organic peroxide was stored inappropriately” and burned up. The state imposed a $20,300 penalty five years later, after finding that Arkema was not maintaining the proper temperature in the devices it used to decompose dangerous gases.

Arkema’s passionate defense of its behavior has led its representatives to quibble over relatively minor concerns. Janet Smith, a company spokesperson, responded to a request for comment from Mother Jones by first criticizing other media companies, such as the New York Times and CNN, for using the term “explosion” to describe what happened last August at the Crosby plant.“The flooding caused by Hurricane Harvey led to a series of short-lived fires at our Crosby plant, but there was no explosion,” she wrote in an email. “We have repeatedly pointed this out to news media covering the incident, but the inaccurate coverage persists.”

Even as residents have begun the process of returning home and paying off storm-related debts, many neighbors still do not know the long-term health effects of exposure to the toxic cloud, because federal investigators could not figure them out, according to a lengthy U.S. Chemical Safety Board report published in May.

The models Environmental Protection Agency staffers used to track how local air and water quality were being affected by the Arkema fires “did not reflect the nature of actual dispersions that occurred,” the CSB found. Combined with “other practical difficulties,” the EPA was unable to draw any firm conclusions about the health threats brought about by Arkema’s plant.

In its public statements soon after the disaster, the EPA was also not clear about the risks posed to residents who were soon forced to evacuate. After testing water samples near the Crosby plant, the EPA announced that the results “were less than the screening levels that would warrant further investigation.” The agency’s inspector general’s office said on August 2 it would investigate how the EPA responded to accidents during Harvey.

The Trump administration played a role, too. Under President Barack Obama, the EPA proposed a series of rules designed to strengthen industry’s reporting requirements to mitigate future chemical disasters. Known as the Chemical Disaster Rule, the proposal was opposed by companies like Arkema and indefinitely delayed once President Donald Trump’s first EPA administrator, Scott Pruitt, took office. Pruitt defended his reasoning after the Arkema fires by claiming that terrorists could have exploited the information chemical companies would have been forced to give up under the rule.“What you’ve got to do is strike the balance,” he said, “so that you’re not informing terrorists and helping them have data that they shouldn’t have.”

For now, at least, that rule has been restored. On August 17, the U.S. Court of Appeals for the District of Columbia Circuit overturned the EPA’s decision to delay the rule. Calling the agency’s actions “arbitrary and capricious,” the court ordered the EPA to let the rule remain until the agency amends its requirements by standard regulatory action. That ruling may only prove temporary given the Trump administration’s commitment to rolling back dozens of Obama-era environmental regulations.

Whether the Chemical Safety Board even exists the next time another environmental disaster occurs is an open question. Embattled former chair Rafael Moure-Eraso was the target of a series of congressional probes into his workplace conduct during a five-year tenure that ended in 2015. Since taking office, Trump has tried to eliminate the agency twice in the White House’s budget proposals, but Congress has restored full funding both times. The resulting uncertainty has impeded “the CSB’s ability to attract, hire, and retain staff,” according to a report from the EPA inspector general’s office in June.

Stopping the next Arkema disaster will require more stringent oversight from federal regulators and a willingness by industry leaders to pony up the cash for frequent safety evaluations and up-to-date equipment. With industry-friendly leaders at the helm of the EPA and a CSB clinging to life, those reforms do not appear likely anytime soon.