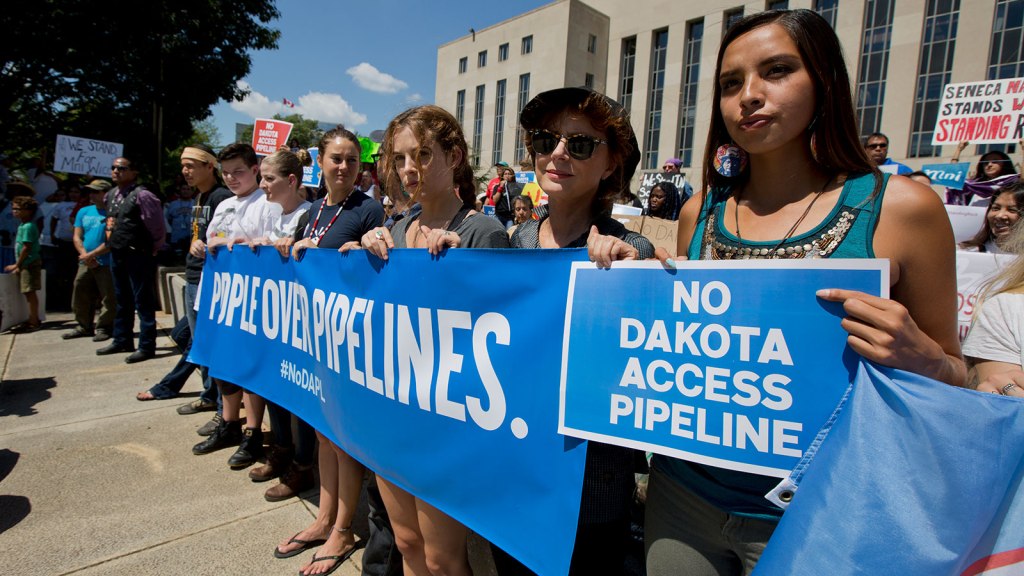 Even if you don’t live in South Dakota, you could be held liable for supporting pipeline protesters there, according to a newly signed state bill. While at least nine states have passed legislation this year cracking down on demonstrations against fossil fuel infrastructure, South Dakota’s new rule gives unprecedented power to penalize groups and individuals even indirectly involved in anti-pipeline actions.

The bill, signed by Republican Governor Kristi Noem on Wednesday, allows state and local governments to seek civil damages from activists or groups engaging in “riot boosting,” a term which the state defines as someone who “does not personally participate in any riot but directs, advises, encourages, or solicits other persons participating in the riot to acts of force or violence.”

“My pipeline bills make clear that we will not let rioters control our economic development,” Noem said. “These bills support constitutional rights while also protecting our people, our counties, our environment, and our state.”

State officials in both North and South Dakota have clashed with several activist groups including Native American tribes over the Dakota Access Pipeline and Keystone XL pipeline, but the states are taking slightly different approaches to pipeline penalties.

In North Dakota lawmakers also passed a bill this week that would reinforce penalties for anyone who tries to block pipeline operations and other fossil fuel infrastructure projects. North Dakota Governor Doug Burgum, however, has yet to say whether or not he intends to sign the bill into law. The North Dakota bill is based on one passed in Oklahoma in 2017 that imposed punishments of up to 10 years in prison and $100,000 in fines for individuals who interfere with a pipeline or other “critical infrastructure.” Under the law, organizations could also be made to pay up to $1 million in penalties if they are found to be “co-conspirators.”

So how is a North Dakota “co-conspirator” different than a South Dakota “riot booster?” The term “riot booster” can be applied out-of-state. The definition of “riot booster” is also vaguer, which is a problem, according to Vera Eidelman, an attorney with the American Civil Liberties Union. “I think [South Dakota’s definition of ‘riot booster’] poses a unique threat to speech and appears to be targeted at protests,” she told InsideClimate News. “It uses words like ‘encouraging’ and ‘advising’ that are very broad and refer to a category of protected speech.”

On Thursday, the ACLU of South Dakota filed a federal lawsuit against state officials on behalf of several Native American tribes and environmental advocates.

“No one should have to fear the government coming after them for exercising their First Amendment rights,” said Courtney Bowie, legal director of the ACLU of South Dakota. “That is exactly what the Constitution protects against, and why we’re taking these laws to court. Whatever one’s views on the pipeline, the laws threaten the First Amendment rights of South Dakotans on every side of the issue.”