C-SPAN's swamp creature unmasked! We talk to the activist in the confirmation meeting clip 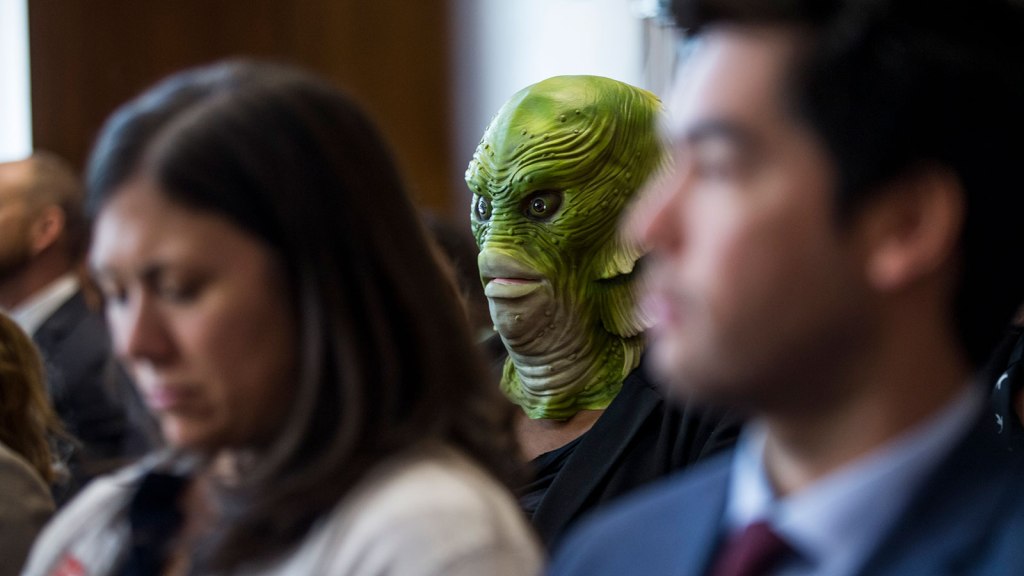 C-SPAN’s swamp creature unmasked! We talk to the activist in the confirmation meeting clip

On Thursday morning, Irene Kim nervously filed into the Senate confirmation hearing of David Bernhardt, President Trump’s nominee to head up the Department of the Interior. The Greenpeace activist was directly behind Bernhardt as he faced questions about his time as an oil lobbyist and conflicts of interests. So Kim and a friend seized the moment and put on swamp creature masks in protest.

Kim was able to stay for the entire hour of the hearing — and then watched in amazement as the video of herself went viral across the internet.

I spoke with Kim about what it was like in the hearing, and why she decided to protest in this way. This interview has been lightly edited and condensed.

Q. Why transform into a swamp creature live on C-SPAN?

A. What we were trying to accomplish was to bring absurdity to this entire situation. Our reality right now is so absurd. To make sure that folks are paying attention, we wanted to make light of the situation.

I have a lot of climate despair right now. I’ve been feeling really discouraged by everything that’s happening, and I really wanted to do something fun. This was kind of an amazing way to do it.

Q. Talk me through that moment.

A. When I first got to the room, I knew it was going to be really serious. I knew I didn’t want to get arrested. I just wanted to make sure to pull this off in the simplest way possible.

I really wanted to position myself to be as close to David Bernhardt as possible. But that C-SPAN camera being there; that was pure luck. I saw C-SPAN’s tweet, and my face was perfectly aligned, so I thought to myself: “This is our opportunity. There’s nothing else to do right now except this.”

Q. What was going through your head?

A. I think folks are focusing on saying that I looked really graceful and that I didn’t look scared or anything, but I was actually really scared doing this. I had a lot of nerves. I tried to channel as much fierce energy of all strong women and non-binary folks that I knew who are also out there fighting and resisting our administration. Resisting is scary, but once you’re able to do it, it’s so freeing.

My whole body was shaking, just because I didn’t know what to expect in the first few minutes of putting that mask on. I thought they were going to pull me two minutes in. To be able to stay for the full hour was really awesome.

Q. How did other people react?

A. It felt like some of the senators doing the questioning saw me and were talking amongst themselves, but no one really interacted with me.

I didn’t get arrested. I just received a warning, and was escorted out of the room. I really tried hard not to be a disturbance, because I know how Capitol Police work, and I’ve seen them in action when people are participating in protests like this. I really wanted to make sure it didn’t get crazy.

Q. What’s been the response?

A. We did what we wanted to accomplish, but it turned out to be a lot more viral than we expected. People have been really, really supportive and uplifting what we did. It’s really amazing to see.