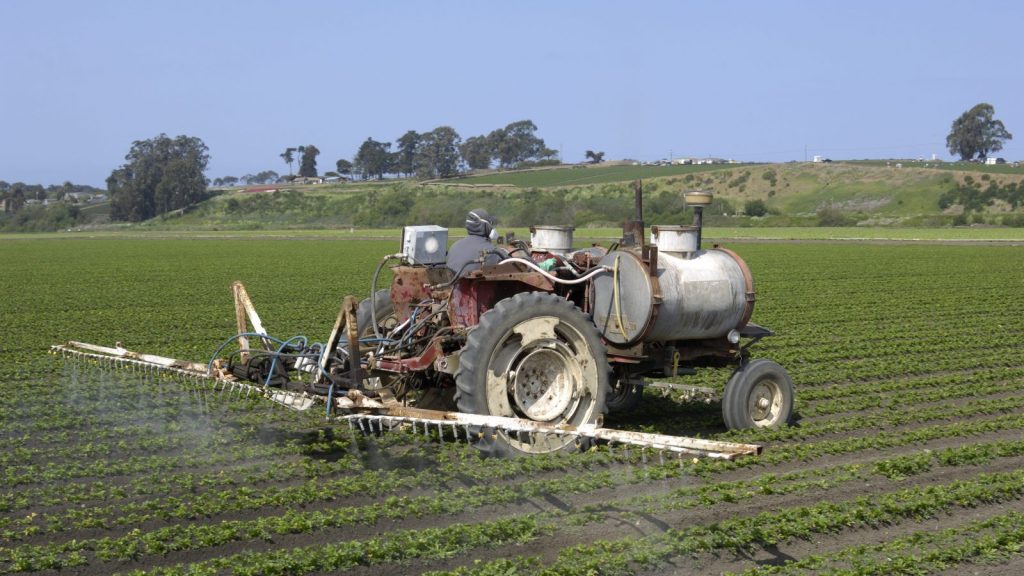 California is banning a widely used pesticide that has been linked to brain damage in children, a major victory for public health advocates who have long fought to outlaw the toxic chemical in the agricultural industry.

The state ban on chlorpyrifos, a pesticide used on almonds, citrus, cotton, grapes, walnuts, and other crops, follows years of research finding the chemical causes serious health effects in children, including impaired brain and neurological development. The U.S. Environmental Protection Agency (EPA) had moved to ban the chemical under Barack Obama, but the Trump administration reversed that effort, rejecting the scientific conclusions of its own government experts.

“Countless people have suffered as a result of this chemical,” the California EPA secretary, Jared Blumenfeld, said in an interview on Wednesday. “A lot of people live and work and go to school right next to fields that are being sprayed with chlorpyrifos … It’s an issue of environmental health and justice.”

The move in California, home to a vast agricultural sector responsible for growing a majority of the nation’s fruits and nuts, is the latest example of the state resisting Trump’s conservative agenda and policies. Environmental activists, however, have been pushing to stop chlorpyrifos use in the state for years in the wake of overwhelming evidence of harms caused by exposure.

“This is a very important and pivotal moment,” said Angel Garcia, the chair of the Coalition Advocating for Pesticide Safety, who has worked with families affected by chlorpyrifos. “It sends the message to communities that they are starting to be heard … People will now have a safer future.”

Epidemiological studies have linked chlorpyrifos to a number of health conditions. Pregnant women living near fields and farms that use the chemical have an increased risk of having a child with autism. Exposure to low to moderate levels of chlorpyrifos during pregnancy have also been associated with lower IQs and memory problems. California officials cited a recent review by a state panel on toxic air contaminants, which found the effects in children could occur at lower levels than previously understood.

“The science is definitive,” said Blumenfeld, adding that he hoped the move would spur the federal government to take action. “This job really should have been done by the U.S. EPA.”

After environmental groups sued the Trump administration for reversing the Obama-era ban, a judge ordered the federal EPA to prohibit use of chlorpyrifos last year. But the government appealed that decision, and the courts have ordered the EPA to make a final decision about chlorpyrifos by July.

Activists have accused the Trump administration of backing the interests of DowDuPont, a chlorpyrifos manufacturer whose predecessor donated to the president.

DowDuPont is now “evaluating all options to challenge” California’s ban, spokesman Gregg Schmidt said in a statement, adding that eliminating chlorpyrifos would “remove an important tool for farmers and undermines the highly effective system for regulating pesticides that has been in place at the federal level and in the state of California for decades.” He also noted that the chemical is currently approved for use in roughly 100 countries.

The U.S. banned chlorpyrifos for residential use back in 2001. An expert panel of toxicologists last year recommended a ban on all organophosphates, the class of pesticides that includes chlorpyrifos. More than 10,000 tonnes of organophosphates are sprayed in 24 European countries each year.

In California, the process of banning chlorpyrifos use across the Central Valley agricultural regions could take up to two years, officials said. In 2015, the state implemented tighter restrictions on the use of chlorpyrifos, but critics have argued that a full ban was the only way to protect the health of farming communities.

The California governor, Gavin Newsom, has also proposed $5.7 million in new funding to support the transition from chlorpyrifos to “safer, more sustainable alternatives.”

Climate change is expected to worsen pest challenges in agriculture, which means the need to find alternatives to toxic chemicals is urgent, said Blumenfeld: “It’s not just about chlorpyrifos. It’s making sure we have a more holistic and nature-based approach.”