With marathon-length climate forums airing on CNN and MSNBC and many Democratic candidates scrambling to endorse flavors of the Green New Deal, climate activists can finally relish the fact that climate change has entered the political mainstream. Voters now rank the issue in their top tier. Republicans are starting to recognize the environment, if not climate, as an issue that resonates with young voters.

But not all environmentalists are satisfied with climate’s newfound attention. Some consider the presidential candidates to be aiming too low on this front, promising net-zero emissions by a given date, for example, or to ban drilling on federal lands. The just-released bipartisan Climate Restoration Emergency Action Report Card aims to address these perceived shortcomings in the climate action conversation.

“What nobody is talking about is the third leg of the stool,” says Paul S. Zeitz, a senior policy advisor at the Foundation for Climate Restoration. The first two legs — mitigation and adaptation — are the standard pillars of climate policy, wherein governments limit the progression of climate change and safeguard communities from its worst effects. Zeitz argues these aren’t enough. “What’s missing is the opportunity for massive carbon removal and Arctic ice restoration,” he says. “Until restoration is part of the conversation and part of the political imperative, we’re not set up to succeed.”

The emerging strategy of climate restoration argues for more than merely staving off the worst effects of climate change. In addition to mitigation and adaptation, its proponents suggest, we need to actively counteract the forces warming the planet by removing carbon dioxide directly from the atmosphere and deploying technologies to regenerate Arctic ice. Yes, these ideas are currently expensive and difficult to scale. But restorationists argue we need to invest in all three legs of that metaphorical stool if we’re going to stabilize the climate.

“It takes time to turn over huge, embedded infrastructure,” says Leslie Field, founder and CEO of Ice911, an Arctic ice-restoration non-profit. What she once considered the “back-up plan I hope we never need” now feels vital. Field, who teaches a course at Stanford on engineering, entrepreneurship, and climate change, stresses the impact that decreased Arctic reflectivity is already having on everything from warming to weather patterns to the jetstream. For her, restoring reflectivity is part and parcel of any effective response to climate change.

This approach is a paradigm shift beyond #KeepItInTheGround and #ExxonKnew rhetoric, because it’s about more than emissions reductions and fossil-fuel sector accountability: It’s about removing carbon dioxide and reversing global warming.

“It’s not going to be a replacement for mitigation, but there’s a gap,” says Robbie Orvis, who directs energy-policy design at Energy Innovation, a nonpartisan energy and climate policy firm based in San Francisco. “We don’t know how to get the last 10 percent of the power sector decarbonized.” So while it’s not a stand-alone solution, he sees restoration as worthy of research investment. As Orvis wrote in Designing Climate Solutions, “Achieving negative emissions necessarily involves removing CO2 from the atmosphere.”

Zeitz, a former State Department official in the Obama administration and a leading figure in the global campaign against AIDS, is setting out to shepherd the ideas of climate restoration through the political arena. “Politics is the competition of ideas,” he says. “And we’re in that game.” His first move: grading presidential candidates from both parties.

Zeitz’s Climate Restoration Emergency Action Report Card ranks candidates as a function of four broad positions relevant to the climate-restoration conversation. The first requires candidates to commit in writing to declaring a climate emergency. Second, candidates must commit to reaching net-zero emissions as quickly as possible (with more ambitious timelines garnering higher grades). Third, they must make an explicit commitment to large-scale carbon-dioxide removal — one trillion tons by 2050. Finally, to earn an A, candidates must also offer written commitment to a plan for “Climate Restoration Emergency Action,” the likes of which also encompass support for global partnerships for climate restoration. 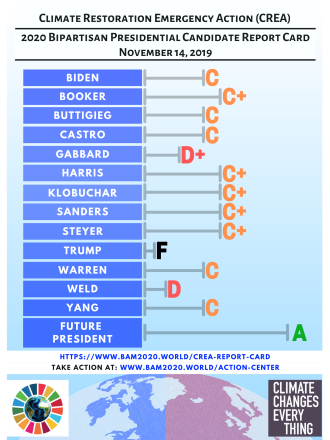 The designer’s ambitions for the grading tool, though, are to uplift rather than to shame. “We need political champions to bring this agenda from idea to action,” Zeitz says. “The idea of the report card is to create an opportunity for candidates to educate themselves about the idea of climate restoration, engage in a serious conversation about what’s possible, and ultimately inspire voters.” In this manner, by encouraging competition among candidates in their support of restoration, the report card is a tactic for building political will. For example, six candidates raised their overall grades by scoring As in one of the four categories: committing to declare a climate emergency.

But in the policy world, ideas need a vehicle to effect change. Alongside this effort, then, Zeitz and his colleagues are developing a policy package with a climate restoration emergency action bill. The bill would create a federal coordinating body and research arm on climate restoration, reestablish U.S. support for the Green Climate Fund, and seed support for global partnerships for climate restoration. Zeitz, who sees the issue as necessarily bipartisan, is optimistic: “I haven’t met one Republican who has objected to the idea of ensuring the survival of humanity.”

This article is sponsored by the Foundation for Climate Restoration, a nonprofit partnering with local governments, NGOs, and communities around the world to launch Climate Restoration projects at scale. Its Healthy Climate Alliance is an education, networking, and advocacy program to advance these goals.