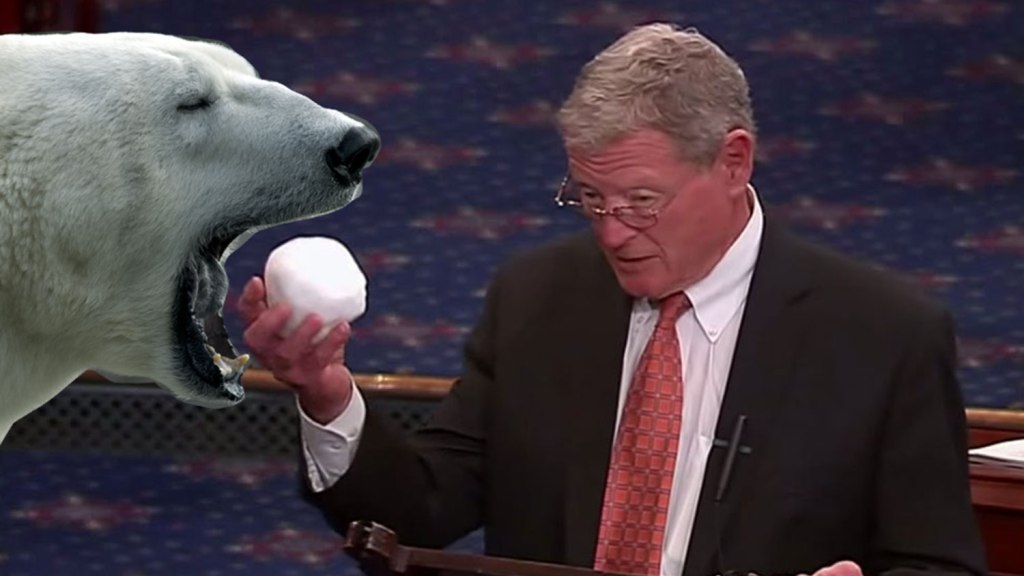 The Hill reports that Sen. James Inhofe — noted climate change denier and author of such works of art as The Greatest Hoax: How the Global Warming Conspiracy Threatens Your Future — has threatened to crash the U.N. climate talks in Paris this December, along with Kentucky Republican Ed Whitfield. “We may send a group over to Paris, just to let them know that there’s another branch of government, in addition to the executive branch, on these issues,” said Whitfield.

The Paris climate talks — a meeting of over 190 countries seeking to create a global emissions pact and address the effects of climate change — won’t be the first time Inhofe has tried to derail efforts to lower carbon emissions. He also crashed the 2009 climate talks in Copenhagen. Back then, the senator planned to bring an entire anti-science entourage and barnstorm the international community with his breaking news that climate change is a conspiracy created by Barbra Streisand, PFLAG, and American communist scientists. Unfortunately for the senator, things didn’t quite go as planned. As Rachel Maddow said at the time:

The ranking Republican on the Senate Environment and Public Works Committee had been promising for months — threatening for months — that he would attend the U.N. global talks on climate change in Copenhagen to lead a truth squad — what he called a “truth squad” — of global warming deniers to try to undermine the international negotiations there of the president of the United States. As it turned out, Senator Inhofe’s truth squad was … just him.

The unaccompanied senator, Maddow went on, spent all of three hours at the conference and could not get a single meeting. What Inhofe was able to do was tell a bunch of reporters that the “global warming hoax” started at the U.N. and then spread to the public through the Hollywood elite. In response, a reporter from Germany’s Der Spiegel said to the senator, “That’s ridiculous. You’re ridiculous.”

You don’t have to tell us.

Inhofe, a Republican from Oklahoma, made headlines earlier this year when he brought a snowball onto the Senate floor, claiming the existence of snow disproves climate change. So will we be in for a sequel in Paris? “I don’t know if I’ll repeat what I’ve done several times before, which is to go over and be the bad guy, the one-man truth squad, and tell the truth, that they’re going to be lied to by the Obama administration,” Inhofe said. This is one American we don’t want to see in Paris, but if Sen. Inhofe does decide to crash the party, let’s hope he leaves the snowball at home.