One recent weeknight, ten people gathered around a knotty walnut table in a living room in suburban Salt Lake City. Laura Schmidt, a 31-year-old environmental advocate, spoke first. This being the group’s eighth gathering, their discussion centered on seeking beauty and meaning. Schmidt, an athletic woman with a dry sense of humor and shoulder-length brown hair, talked about the importance of exercising the neocortex, the part of the brain that mediates advanced mental functions, in order to access deeper meaning. With the Earth tilting toward climate catastrophe, the capacity to build resiliency through beauty and meaning is critical for preserving the self and planet, Schmidt said. Each member of the group took a few minutes to share. One read a poem by Rilke; another, words by Terry Tempest Williams, the American writer and conservationist. They spoke about their feelings of anxiety and grief, and of finding strength in the natural world. One man told the story of wheeling his terminally ill wife to a hospital room window to watch a final sunset.

Imagine Alcoholics Anonymous mixed with an environmental humanities course, and you’ll begin to get a sense of the “good grief” group started by Schmidt. Its goal is to help people cope with what’s been called “climate grief” — anxiety, sadness, depression, and other emotions provoked by awareness of the planet’s march toward a hotter, less biologically diverse, and potentially unsustainable future. The psychological consequences of climate change have been the subject of greater study in recent years, with the Obama White House releasing a report in 2016 that predicted growing numbers of people would experience direct mental-health effects from exposure to weather-related natural disasters as well as indirect stress and anxiety. In March, the American Psychiatric Association approved a policy committing to mitigate the adverse mental health effects of climate change.

In the United States alone, “we’ve seen a reflooding of Louisiana, we’ve seen terrible fires in the Southwest, we know there are water wars,” says Lise Van Susteren, a psychiatrist in private practice and a founding member of the Climate Psychiatry Alliance. “Even if you’re lucky enough to be at a distance … boy, is that going to weigh on you heavily. Among the activists, those of us watching, listening, hearing, and sensitive to what’s going on, we’re going to be the tip of the spear.”

Schmidt grew up in rural Michigan, off a dirt road surrounded by corn and soy fields and near the woods. Her home life was tumultuous — her father was an alcoholic and her mother eventually left Schmidt and her sisters to raise themselves. As a child, Schmidt sought sanctuary in the nature around her and, in her mid-20s, she began attending Adult Children of Alcoholics, a spin off of Alcoholics Anonymous. She found its 12-step approach, which focuses on understanding one’s past and how it influences the present, to be a bulwark against feelings of self-pity and helplessness. It was in graduate school at the University of Utah, where she took interdisciplinary courses on the environment, that she began to consider how climate change, habitat destruction, pollution, and other threats were now causing her similarly intense emotions. For Schmidt, species loss was of particular concern — the idea that dozens of species are blinking out of existence each day, at a pace 1,000 to 10,000 times faster than the natural rate of extinction. “We’re eliminating species before we even identify them, hear what noises they make, see what colors they are,” she says. 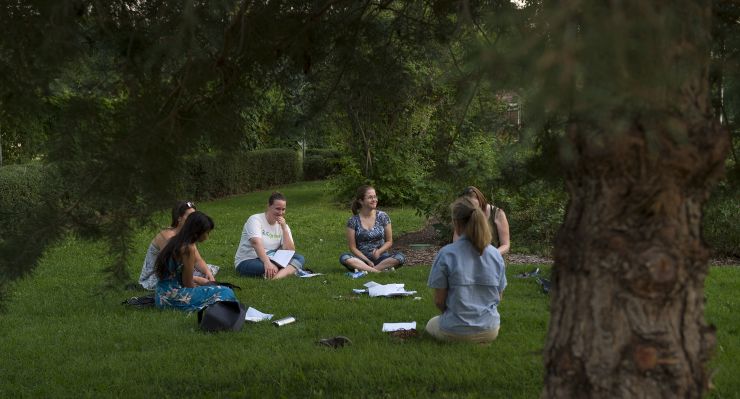 Schmidt reached out to dozens of social-justice activists and environmentalists, people like Derrick Jensen and Bill McKibben, to learn how they were personally affected. What she found was that feelings of sadness and anxiety, and even literal nightmares, were common. Last year, with the help of her partner, Aimee Reau, Schmidt developed a nine-step program for building resiliency loosely modeled on AA (The steps begin with “admitting there’s a problem,” and include “acknowledging the ways in which we’re complicit,” “taking breaks and respecting your limits,” and “letting go.”) While she initially intended it for environmental professionals, most of those who signed up are employed in other fields but are personally committed to a greener planet. About a dozen people attend each session and 50 subscribe to its mailings. Schmidt, who now works as an outreach coordinator at the environmental group HEAL Utah, hopes to soon evaluate the pilot, incorporate the program as a nonprofit, and potentially expand it to other cities.

Kiera Bitter first learned of the group through a web listing in a local newspaper. A case manager in the court system whose family all supported Donald Trump, Bitter says she felt isolated in her views on climate change and eager for a way to add more meaning to her life. The first time she attended a grief group session, she cried. An introvert, this surprised her. “I told them that I could tell they were like me and it was just such a relief to be there and have hope and be surrounded by people who think like myself,” she says. Bitter is newer to environmentalism than some other participants. She began experiencing deep concern about the Earth after visiting a landfill not long ago and since then has thought often about her carbon footprint — when she drives, eats off a paper plate, makes a purchase. The group has been educating her about the consequences of climate change, which has caused her more short-term anxiety, but also about ways to take action, which she says is easing some of her frustrations. “Hopefully this group keeps growing and growing,” says Bitter.

The meetings have been held at the home of Alli Harbertson, who met Schmidt three years ago through a wilderness “vision fast” program. Harbertson works as a caterer, and she recalls once standing in a Costco aisle, surrounded by carts with packaged foods up to people’s shoulders. She retreated to her car for a while before she could face the store again. “We live in a destructive culture environmentally and I have a lot of pain and sadness and helplessness being part of systems I feel are not working,” she says. Like Bitter, she has sometimes felt isolated in her beliefs, or at least the strength they have over her. “It’s not exactly cocktail party chatter,” she says. Harbertson says she appreciates the structure of the grief group and its nine steps, which underpin but don’t limit the discussions. She led the fifth session, on “feeling your feelings,” in which she and others spoke about the tendency to minimize or repress more fatalistic views on consumerism and the environment.

Thomas Doherty, a psychologist who specializes in applying an environmental perspective to mental health, believes the AA approach could provide valuable inspiration for coping with the planet’s warming. “The philosophical realization that there are certain things beyond your control is a big part of AA,” he says. “We are also on some level powerless against climate change.” But the “key question,” according to Doherty, is “where we can claim some power on these issues.” If done correctly, these sorts of groups could help people overcome the numbness they may feel regarding the existential threat of climate change and determine strategic ways to take action, he says.

Schmidt’s nine steps launched in January, after Trump’s election, an event that inflamed frustration, rage, and despondency among those who want the United States to acknowledge decades of science and curb planet-warming pollution. Without reductions in carbon emissions called for by the Paris climate agreement, experts warn, the world will be locked into a future of devastating droughts, frequent flooding, and food shortages. Even if countries do meet their commitments, it may already be too late to mitigate many of climate change’s destructive effects. For members of the grief group, anger at Trump, and at the Utah legislature, which recently shrugged off a handful of pro-environment bills, is a given. Schmidt wants to help others acknowledge this anger without suffocating from it, to encourage people to move from instinctive responses (the flight-fight-freeze impulses of the “reptilian brain”) to empathy and analysis (the neocortex).

Dick Meyer, a 67-year-old landscaper who joined the grief group after learning about it from public radio, says he’s seen conservationists become paralyzed by frustration and anger. Meyer passed through a grieving process after his work on a horticultural project in Santa Fe prompted him to research sustainable ecology. “I came to the conclusion that mankind is pretty much screwed,” he says. The grief he experienced was similar to the intense sadness that accompanies the death of a loved one, but it felt more solitary, and less socially accepted. He credits Schmidt’s group for moving beyond grousing to processing and healing. The refusal of policymakers to act on climate change’s extensively documented, urgent threats is maddening, and yet Meyer doesn’t think the problem can be solved by politicians alone. The grief group, he says, is “a seed of a community we need to build around living sustainably.” It’s teaching people to acknowledge fallacies we’ve come to accept, that the Earth is immutable and economic growth is infinite. Meyer thinks that local efforts like this one need to bloom before legislation can follow. “We all live, don’t we, with the notion that if we need it, someone will come save us?” he says. “Well, no one is coming to save you. Certainly not someone from Washington.”