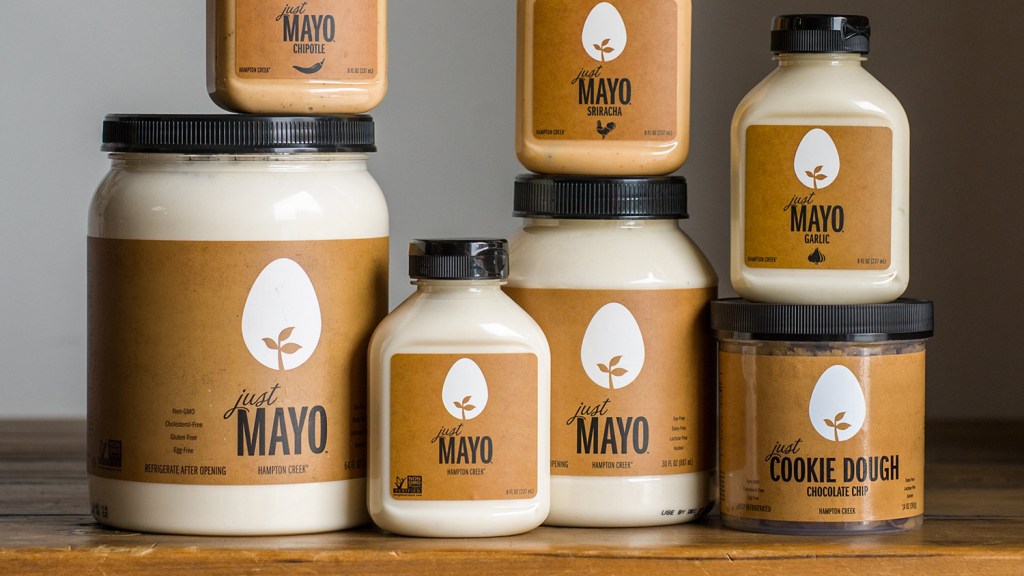 The mayos wars are heating up. On the battlefield: the American Egg Board versus Just Mayo.

Just Mayo looks like mayo, smells like mayo, and tastes like mayo, but it’s actually mayo’s vegan doppelgänger that uses pea protein in place of eggs. It’s made by the San Francisco startup Hampton Creek, and it’s this very lack of eggs that has the American Egg Board scrambling (sorry).

According to documents recovered from the AP, the American Egg Board — which is run by the U.S. Department of Agriculture — has been on a campaign to get Just Mayo off grocery-store shelves. The AP reports:

The documents offer a sometimes comic glimpse into the alarm the egg group felt about the startup and its CEO, Josh Tetrick, who has said he wants to make the food system more environmentally friendly by replacing the eggs in an array of foods with plant-based alternatives.

“You want me to contact some of my old buddies in Brooklyn to pay Mr. Tetrick a visit?” one egg board executive wrote to another, presumably in jest.

Presumably. The story, however, gets even weirder than vague threats by egg magnates. The investigation revealed that the USDA asked the Food and Drug Administration to challenge Just Mayo’s food claims, and in August 2015, the FDA sent Hampton Creek a letter stating that it had “significant violations,” including misbranding and mislabeling Just Mayo, as well as making specious nutritional claims. (The FDA has yet to release a statement on their motivations.)

The Egg Board also worked with Unilever, the parent company of mayonnaise manufacturer Hellmann’s, in a lawsuit against Hampton Creek alleging that Just Mayo isn’t mayo because it doesn’t have eggs. American Egg Board president Joanne Ivy wrote in an email:

I just got off the phone with a guy working with the Unilever case with Hampton Creek. He wanted me to say that we supported Unilever in this lawsuit with Hampton Creek, but I told him that we could not take a position. However, since the regulation requires eggs in mayo and their product does not, I said that they should make sure that FDA is aware to address this situation. I feel sure they are aware but they may need to be pushed.

The lawsuit was later dropped, but don’t worry — there’s more. The American Egg Board recruited Anthony Zolezzi, an “eco-entrepreneur” with, presumably, friends in high places, to call Whole Foods and ask that they stop selling Just Mayo. From Quartz:

Zolezzi said he offered to help the egg board because he considered Just Mayo’s packaging to be misleading and doesn’t think removing eggs from people’s diet and replacing them with plant-based foods is a good idea.

Riiiiiight. And they paid him.

Zolezzi wasn’t the only shill on the American Egg Board’s payroll. They also paid the PR firm Edelman $43,000 to find bloggers to promote eggs. An account executive at Edelman wrote in an email that the bloggers would “encourage their readers to make a conscious decision to choose real and sustainable foods, like eggs, on their path to a healthier lifestyle.”

Now, is any of this illegal or is it good, old-fashioned American business? Attorney and advocate Michele Simon says laws were probably broken:

… programs like the Egg Board are legally required to stay within the boundaries of advertising, promotion, consumer education, and research. Specifically not allowed are lobbying activities. The statute says that no funds shall “be used for the purpose of influencing government policy or action. However, several email exchanges indicate this provision was violated.”

Looks like the Egg Board needs to brush up on its statutes … or at least stop using public funds to further its own agenda. Either way, this fight is juicier than a Nicki Manaj tongue lashing. Stay tuned.