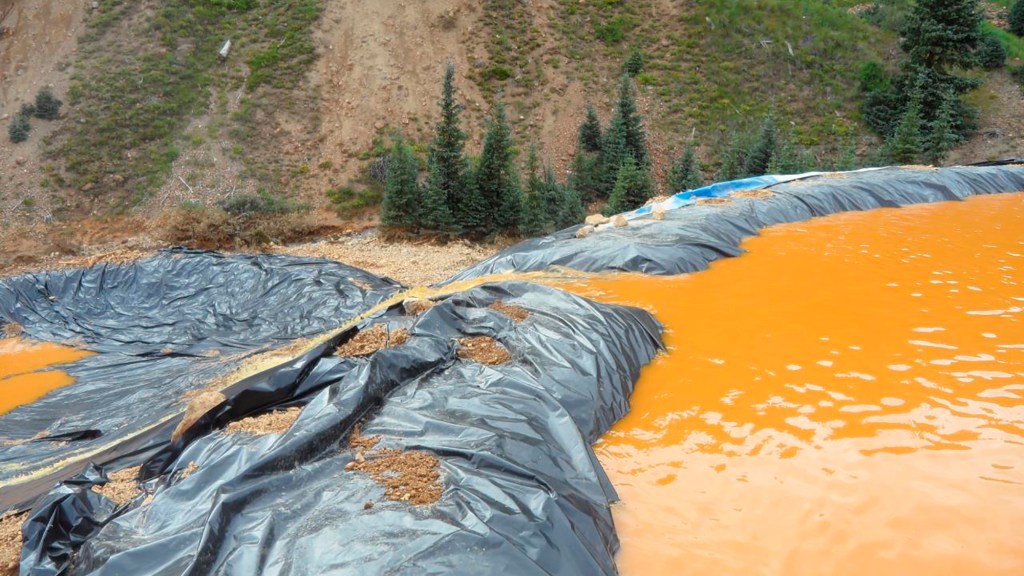 Yellow mine waste water from the Gold King Mine collects in a holding pool in San Juan County, Colorado Reuters
Climate & Energy

You might have seen the photos of the Animas River in southwest Colorado after waste from a gold mine started leaking into nearby waterways at a few hundred gallons a minute. The Animas — normally a clear and cold Rocky Mountain river where both trout and kayakers dart among the rapids — is now the color of baby shit:

The spill started on Wednesday when EPA workers were investigating a leak at the abandoned Gold King Mine. They tried to move debris out of a mine tunnel and inadvertently opened up a passage that let at least 3 million gallons of wastewater spill into Cement Creek — a body of water already so polluted that fish can’t survive there. The waste then flowed into the Animas, a popular recreational river. When the mess reached Durango — a Colorado town known for outdoor activities — the EPA apologized to residents for failing to warn them for 24 hours after the spill.

The pollution is not just an eyesore: The mine waste contains a few elements that could kill you if consumed in large enough quantities, like arsenic, cadmium, and lead, as well as a few others that probably won’t kill you but might make you grow a tail, like aluminum, copper, and other heavy metals. Not exactly stuff you want mucking up your tap water. Durango gets its drinking water from the Animas, but city officials say the intake valve was shut off before the polluted water reached the town.

While the EPA deals with this shit show, a report from the Associated Press highlights concerns that similar spills could happen at other old mines throughout the Western U.S.:

Until the late 1970s there were no regulations on mining in most of the region, meaning anyone could dig a hole where they liked and search for gold, silver, copper or zinc. Abandoned mines fill up with groundwater and snowmelt that becomes tainted with acids and heavy metals from mining veins which can trickle into the region’s waterways. Experts estimate there are 55,000 such abandoned mines from Colorado to Idaho to California, and federal and state authorities have struggled to clean them for decades. The federal government says 40 percent of the headwaters of Western waterways have been contaminated from mine runoff.

Forty percent! And it’s not easy to clean up — nor is it cheap. The Clean Water Act stipulates that anyone who contributes to water pollution can be held liable and prosecuted, including for any accidents that happen during cleanup of, say, abandoned gold mines. Because of this, groups have been reluctant to aid in cleaning these mine sites, many of which haven’t been opened in nearly a century.

The spill is also affecting residents of the Navajo Nation along the San Juan River in New Mexico, where people have been forced to stop watering farms and livestock. Navajo Nation President Russell Begaye said he plans to sue over the spill: “The EPA was right in the middle of the disaster and we intend to make sure the Navajo Nation recovers every dollar it spends cleaning up this mess and every dollar it loses as a result of injuries to our precious Navajo natural resources.”

The EPA, however, is contending that the spill will do no lasting damage to people or wildlife. “The orange color is alarming to people, but that is not an indication in any way of a health risk,” said EPA official Joan Card. Testing is ongoing, but in the meantime, you may want to plan your next rafting trip elsewhere.