Big charitable foundations that shape the climate movement dole out cash for renewables and energy efficiency. But where’s the love for nuclear power, carbon capture, and geoengineering?

It’s nonexistent. That’s the finding of a new paper published this week by Matthew Nisbet, a professor at Northeastern University who studies climate change communication.

Just as the Koch brothers push their fossil-fuel friendly agenda, big philanthropies have been controlling the strategy of climate activism more than most people realize. Nisbet’s research suggests that they’ve thrown their money and influence at a preferred set of tools to combat climate change, rather than turning on all the alarms and grabbing at every solution that might stop climate disasters. The 19 foundations he surveyed, for instance, put 25 percent of their funds toward renewable energy and energy efficiency but just 2 percent toward evaluating carbon capture and cleaning up natural gas.

“Far from being passive supporters of actions to address climate change, major U.S. foundations for several decades have played an active role,” he wrote. 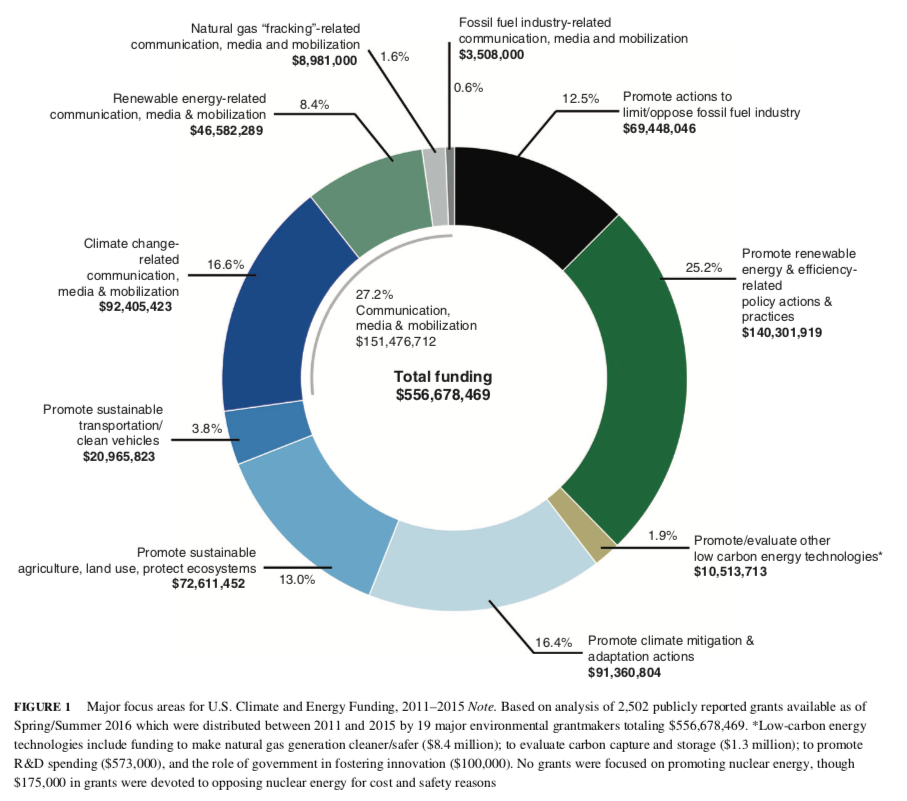 Nisbet looked at the years 2011 to 2015 for his study. But of course,things might have changed since then — especially after the election of Donald Trump. With a renewable-only strategy looking less realistic, some foundations have shifted some support to low-carbon tech.

“Since 2016, for example, the Hewlett Foundation has provided $850,000 to the Energy Reform Innovation Project to focus ‘on energy solutions that resonate with center-right interests, including mitigation technologies such as carbon capture and storage and advanced nuclear,’” Nisbet wrote.

Should climate strategy focus on supporting priorities of the enthusiastic green left? Can climate hawks work together with conservatives? We’ve been debating these questions for years. The argument for pragmatic coalitions of right and left would be a lot stronger if conservative politicians were willing to vote for any form of conservative climate action. But Republican voters tend to unseat any of their politicians who meet Democrats halfway (or even a quarter of the way).

As conservative conservationist Benji Backer told me: “If you try to talk about climate change you are going to lose 80 percent of conservatives.”

Hawaii’s rarest plants are in crisis. Meet the people fighting to save them.