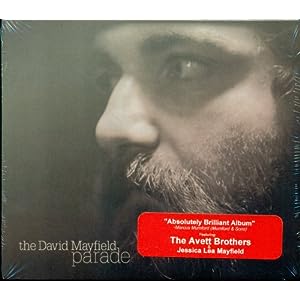 Earlier this year, a friend of mine casually mentioned that he’d been enjoying the David Mayfield Parade album. This friend happens to be a professional music critic, so I tracked it down, despite having never heard a thing about it (and I keep up with new music pretty well).

The album quickly became my favorite of the year (though technically it was released in 2011). In fact, it’s my whole family’s favorite — all four of us can sing more or less every word to every song. Here’s “Noreen,” which will make you dance.

As I started digging in a little more, I realized that Mayfield has connections all over my personal music landscape. He’s played drums for the Avett Brothers on tour, and they appear on the album. His little sister is Jessica Lea Mayfield, who I also love. He’s toured with Mumford & Sons. He’s been a session and/or touring player for all sorts of other folks. Musicians love the guy.

Anyway, the album is awesome. And I’ve been wondering: when’s the follow-up?

As it turns out, he can’t seem to find a label to fund it and put it out. Because … WHAT THE F’ING F, RECORD INDUSTRY? Seriously.

So he’s doing something different: he’s raising money on Kickstarter to make his next album.

Now, I’m one of those awful illegal downloaders that’s killing the industry, and I have a good bit of guilt about it, but I’ve always thought: if there was a way to support musicians more directly, without going through middle men, I’d take it. I’d rather send money directly to a musician than have a label and iTunes and whoever else skim off the top.

So I’m putting my money where my mouth is — I gave David Mayfield $50 to help him make his new record. If you like his music, you should do the same! You can get all sorts of cool prizes. If I was richer, damn would I have given more. If you give $1,000, he’ll do a solo acoustic concert for you in the venue of your choosing! If you give $2,500, he’ll bring his whole band, do a show for you, and then jam with you afterwards! If you give $5,000, he’ll produce your friggin’ album. That is just … awesome.

I don’t know if this particular model is sustainable, but I do think there will be more and more things like this popping up, means of making and spreading music that rely on peer-to-peer networks instead of corporate third parties. One way to make sure they catch on is to support them, so … give David Mayfield some money! I really want to hear his damn album.

As a bonus, here’s another song off the DMP album, a cover of an elegant old country song called “Sea of Heartbreak.”

And here’s Mayfield — who, it turns out, is also quite funny — introducing the project: