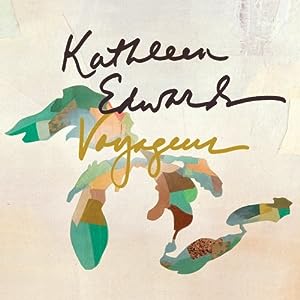 I’ve been a Kathleen Edwards fan for ages, ever since her 2003 debut album Failer. She’s one of those dependably solid singer-songwriters who never quite fall into any particular genre or niche and so never get much press. She’s never had a “hit” big enough to bust her out of semi-obscurity, despite writing several songs that I absolutely treasure.

Ironically, though, everyone seems to be paying attention to her now. Why? Because she’s dating indie darling Justin Vernon (aka Bon Iver) and he produced her new album, Voyageur.

Which is goofy on some level, but the music press is what it is, and I suppose anything that gets her to a wider audience is okay by me.

Edwards’ stated goal with this record was to get away from the twangy Americana vibe of her previous records and move closer to the indie-rock music she loves. So there’s more variety here, more electric guitars, more keyboards, more feedback and echo effects. But honestly, it’s not that far off — her songs have a distinctive vibe and that hasn’t changed. Which is good!

Here’s a track from the album called “Change the Sheets”:

Here I am with Edwards at the 2003 Sasquatch music festival in Washington: She looks even better now. (I, however, have just gotten fatter and uglier.)