Summers around the world are already warmer than they used to be, and they’re going to get dramatically hotter by century’s end if carbon pollution continues to rise. That problem will be felt most acutely in cities.

The world’s rapidly growing population coupled with the urban heat island effect — which can make cities up to 14 degrees F (7.8 degrees C) warmer than their leafy, rural counterparts — add up to a recipe for dangerous and potentially deadly heat.

Currently, about 54 percent of the world’s population lives in cities, and by 2050 the urban population is expected to grow by 2.5 billion people. As those cities get hotter, weather patterns may shift and make extreme heat even more common. That will in turn threaten public health and the economy.

To illustrate just how hot cities’ future could be and the choices they face, Climate Central created the interactive above in partnership with the World Meteorological Organization. It shows how the average summer high in the future in each of these cities compares to other cities of today. In some cases, the shift puts them in a completely new temperature zone.

Under the high-pollution scenario, currently mild Ottawa, Canada, could have the tropical climate of Belize City by 2100. Mountainous Kabul, Afghanistan, could feel like coastal Colombo, India. Already hot Cairo, Egypt, could feel like its downright sweltering neighbor Abu Dhabi.

The average land temperature is projected to rise 8.6 degrees F (4.8 degrees C), but due to the vagaries of geography, some cities will warm much more. Sofia, Bulgaria, has the biggest overall temperature shift, with temperatures rising nearly 15 degrees F (8.4 degrees C) by 2100. That would make its summers more like Port Said, Egypt. 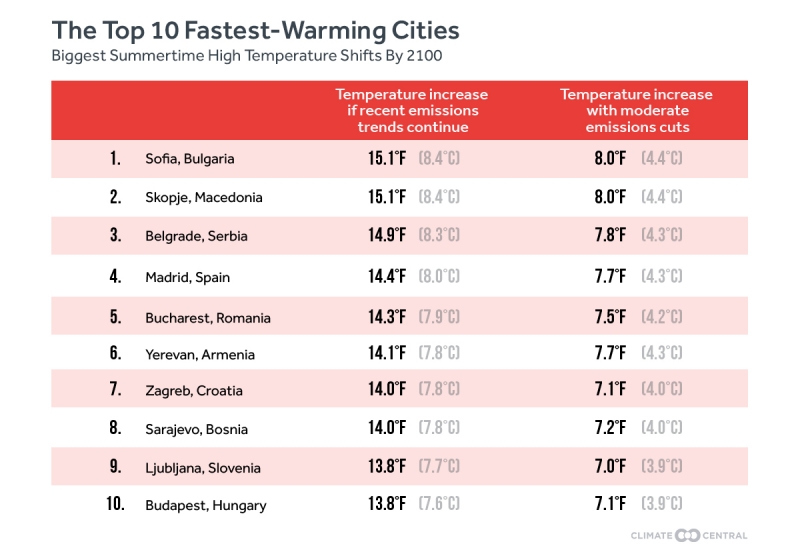 Up to a dozen cities will heat up so much, their summers will have no analog currently on Earth. Khartoum, Sudan’s average summer temperature is projected to skyrocket to 111.4 degrees F (44.1 degrees C) if carbon pollution continues unchecked. That shift underscores that unless carbon pollution is curbed, the planet could be headed toward a state humans have never experienced.

Reducing carbon emissions still means temperatures will rise in cities (and everywhere else). In Khartoum, moderate cuts mean the city’s summer average high is projected to top out at 106.9 degrees F (41.6 degrees C), a high that is still hot (as hot as Riyadh, Saudi Arabia, to be exact), but at least of-this-planet hot.

Dealing with less extreme heat makes adaptation easier and less expensive, and given that choice, perhaps it’s no surprise cities are leading the charge on climate change. They face the worst impacts of extreme heat and are home to billions. That’s why thousands of mayors from around the world have banded together and pledged to reduce their emissions. That includes multitudes of U.S. cities committing to meet the Paris Agreement goals after President Trump announced he was pulling the U.S. from the pact, and even more ambitious moves like Oslo’s pledge to nearly zero its emissions by 2030.

WMO and Climate Central are launching a series of climate reports by TV weather presenters from across the world. The first videos are from Barcelona, Madrid, and Hanoi. Others will roll out in the coming weeks.