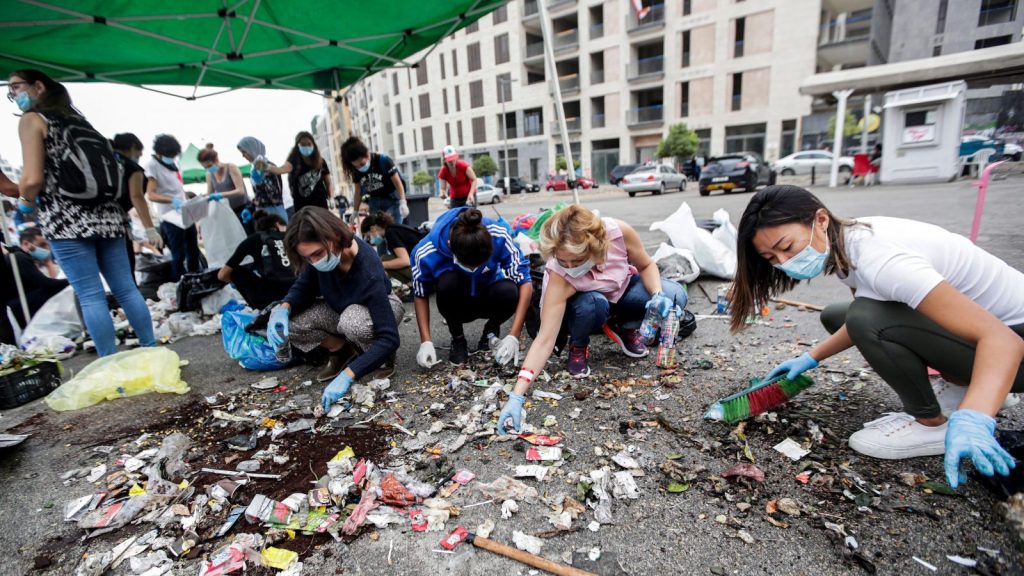 This story was originally published by Sierra Magazine and is reproduced here as part of the Climate Desk collaboration.

Though the five were students, they hadn’t been in class for 26 days. Some of their teachers were getting upset, but the activists considered cleaning up after the protests that had been roiling the country since mid-October more important than studying.

They wanted to show the country how to take care of itself, said Paul Hanna, 17, pausing her sorting. “Without recycling, most of the trash goes into the sea.”

“We don’t want to see trash in the street,” said Mira Raheb, also 17. “If we clean here, it will change [the mentality].”

Like youth activists around the world, Lebanese environmentalists are objecting to the status quo, which in Lebanon means protesting against rampant government corruption, a faltering economy, and a long list of environmental problems that dominate daily life. Hoping to capitalize on the current unrest, they are also working to set the country on a greener path.

Since the Civil War ended in the 1990s, Lebanon has been unable to consistently provide 24/7 electricity, a functioning public transit network, proper waste management, or drinking water for its citizens. The lack of basic services impacts poor and working-class families especially hard, and the environment also suffers, with people turning to diesel-powered generators and relying on plastic water bottles.

This past October, a wildfire erupted in a forested area south of Beirut and quickly got out of control, burning more than 3,000 acres. Hot, windy conditions played a role, but so did government incompetence (three privately donated firefighting helicopters sat in disrepair at a nearby airport).

Five days later, over 1 million Lebanese were in the streets demanding that the members of the government step down. By the end of October, Prime Minister Saad Hariri had resigned.

“The forest fires were a major precursor to the revolution,” said Adib Dada, 36. An environmental architect and biomimicry specialist, Dada has led a guerilla gardening project as part of the protests, planting 30 native trees and shrubs in downtown Beirut with a group called Regenerate Lebanon.

The NGO has been fundamental in galvanizing the public around collective green solutions for the country’s environmental problems. “It is about continuous actions, really protesting the change we need to see,” said Joslin Kehdy, the group’s founder.

As the protest centralized around Martyr’s Square this past fall, Regenerate Lebanon set up an encampment there. It includes a kitchen that serves around 250 locally sourced meals daily without using any plastic (organizers rely instead on stainless steel kitchenware or the briq, a traditional Lebanese water jug). It has a maker space that boasts a living wall as well as a library and an area to collect donations like clothes and foodstuffs. Citizens can stop by a “cafe,” where there is potable filtered water and solar-powered recharging stations. Kehdy sees the encampment as a micro-model that is already being replicated in some villages.

One of the biggest environmental issues that has brought Lebanese from all religious sects together to protest is the garbage that for years has been piling up on the streets and beaches.

Since 2015, the country has spent at least $430 million on landfill contracts that went to business associates of politicians in power. According to reports, landfill operators have not been recycling despite mandates to do so and have been dumping trash and toxic waste directly into the Mediterranean.

“People are demanding a right to live in a country that manages its waste in a sustainable way,” said Julien Jreissati, campaigner at Greenpeace Middle East and North Africa. Pointing out that there are both political and environmental slogans at the protests, Jreissati believes that the waste problem could easily be solved if the government created a proper strategy. As of now, Greenpeace Middle East and North Africa estimates that only 10 percent of trash in Lebanon is recycled.

An environmental organization known as the Green Tent, which coordinated the Gen-Zers’ trash sorting in downtown Beirut, was established largely in response to this crisis. When a group of friends saw the mountain of trash left behind by the protests, they began cleaning it up.

“We decided to take this initiative to act physically instead of shouting and swearing,” said Karmal Charafeddine, 34. “It’s paying back our civil duties.”

After a night of protests, whoever was available would meet at 8 a.m. to begin collecting and sorting. Volunteers started showing up, and the Green Tent began coordinating with other environmental groups like Regenerate Lebanon to come up with creative solutions for reusing waste — for example, collecting glass and donating it to traditional blowers to make new glassware. Over half a million cigarette butts were handed to local shaper Paul Abbas, who is turning them into surfboard mats.

As protests have become more decentralized, the Green Tent has “decided to go mobile,” said Charafeddine. The group is no longer doing cleanups in Martyr’s Square, but has organized two outside of Beirut and is in the process of planning a country-wide cleanup.

Now nearing the end of December, the unrest in Lebanon shows no signs of stopping, but one thing is certain: The Lebanese refuse to go back to the status quo.

“I used to think the problem was so big — waste, the water crisis,” said Joanne Hayek, a member of Regenerate Lebanon. “For me, the biggest change is that we realized in fact we all had the same dream of a clean Lebanon. That has aligned us.”