You probably didn’t give much thought to how exactly you loaded this webpage. Maybe you clicked a link from Twitter or Facebook and presto, this article popped up on your screen. The internet seems magical and intangible sometimes. But the reality is, you rely on physical, concrete objects — like giant data centers and miles of underground cables — to stay connected.

All that infrastructure is at risk of being submerged. In just 15 years, roughly 4,000 miles of fiber-optic cables in U.S. coastal cities could go underwater, potentially causing internet outages.

That’s the big finding from a new, peer-reviewed study from the University of Wisconsin-Madison and the University of Oregon. To figure out how rising seas could affect the internet’s physical structures, researchers compared a map of internet infrastructure to the National Oceanic and Atmospheric Administration’s predictions for sea-level rise near U.S. coasts.

In New York City, about 20 percent of fibers distributed throughout the city are predicted to flood within 15 years — along with 32 percent of the fibers that connect the metropolis to other cities and 43 data centers. The research suggests that Seattle and Miami are especially vulnerable, along with many coastal areas. 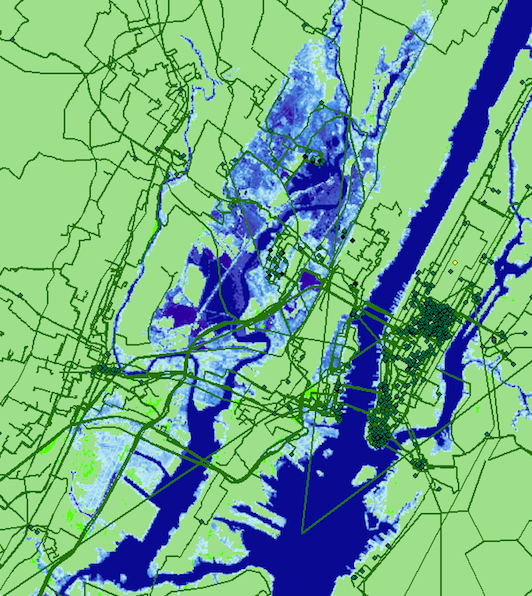 A map of New York City shows a network of cables (green lines) and areas estimated to be underwater in 15 years (blue shaded areas) due to sea-level rise. Paul Barford, UW-Madison

“All of this equipment is meant to be weather-resistant — but it’s not waterproof,” says Paul Barford, UW-Madison professor of computer science and a coauthor of the paper. Much of the system was put into place in the ’90s without much consideration of climate change, he says.

On top of that, much of the internet’s physical infrastructure is aging. Paul Barford says a lot of it was designed to last only a few decades and is now nearing the end of its lifespan.

That is, if the floods don’t get to it first. While 15 years may seem shockingly soon, we’re already seeing more high tide flooding, points out Carol Barford (married to the aforementioned Paul), a coauthor on the paper and director of UW-Madison’s Center for Sustainability and the Global Environment. We’re seeing outages related to extreme weather, too: Hurricane Irma, for example, left over a million people without internet access.

It’s hard to predict exactly what would happen inland when coastal infrastructure floods — but the internet is an interconnected system, so damage in one place could affect others. For those inland, it’s possible that coastal flooding could cause a total internet connection outage, or issues in connecting to particular web pages and services.

Still, there’s a lot of research to be done. “We need to better understand the scope of the problem to create good solutions,” says Ramakrishnan Durairajan, a University of Oregon assistant professor of computer and information sciences and the paper’s lead author. Further studies could examine the effects of increased extreme weather on the system, he says, as well as ways to better engineer web traffic in the face of floods or other climate-induced disasters.

The takeaway, Carol Barford says: “If we want to be able to function like we expect every day, we’re going to have to spend money and make allowances and plans to accommodate what’s coming.”