Hurricane Maria hit women in Puerto Rico the hardest. And they’re the ones building it back. 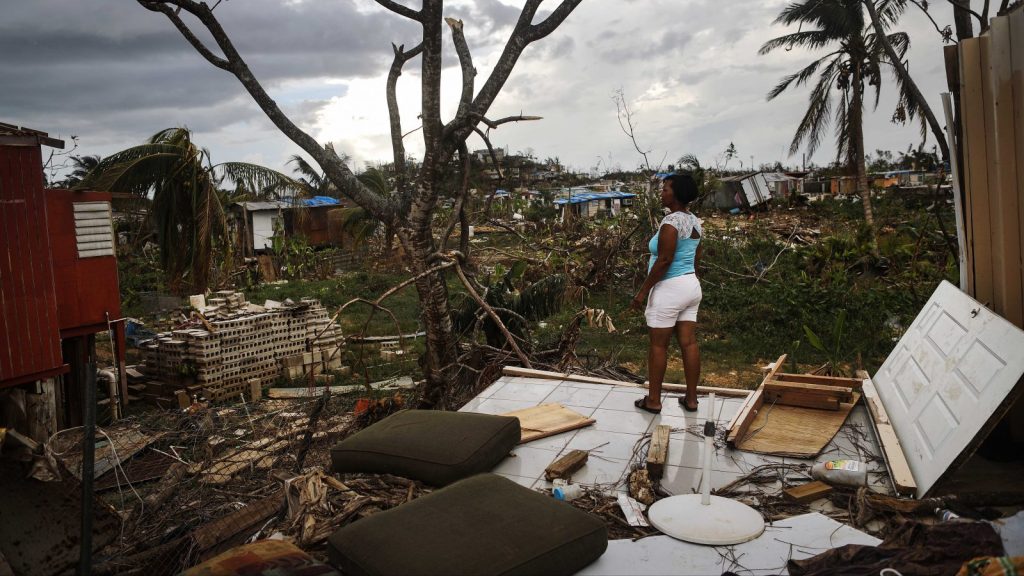 Hurricane Maria hit women in Puerto Rico the hardest. And they’re the ones building it back.

After Hurricane Maria tore through Puerto Rico, Adi Martínez-Román’s morning routine went something like this: Wake up at 5 a.m., secure a water cistern on her roof to prevent it from leaking, fill her generator with gasoline and turn it on to power her refrigerator, get ready for work, turn the generator off to conserve gas. (Her fridge would have enough juice to keep food cold through the afternoon.) Then she could finally head to her job providing others affected by the storm with legal services. After work came the hunt to get more gasoline to power the generator.

Martínez-Román considers herself lucky to have had a generator and a cistern. She was also fortunate that power was restored to her home by Thanksgiving, before much of the rest of the island. But even now she says the smell of gasoline triggers strong feelings about what she and other women have endured since the hurricane.

When superstorms make landfall, they often exacerbate existing inequities. Women typically pay a higher price during a storm and in its aftermath, with their lives and then with their labor. As Puerto Rico recovers from Hurricane Maria, women like Martínez-Román are doing double duty — leading community efforts to rebuild while managing households with fewer resources. As they do this, months without electricity to power modern conveniences like washing machines has led to bleeding hands and aching backs for women cleaning clothes by hand. Limited lighting at night makes public places feel less safe, and women say contractors brought in to repair the island’s infrastructure have sexually harassed them.

This week’s nor’easters dealt Puerto Rico a follow-up blow to Maria, as 30-foot swells — the largest waves the island has seen in more than a decade — led to a new round of evacuations on Monday. This comes after the Treasury Department delayed its latest disaster relief loan to the territory, which it’d already slashed in half.

In her role as the executive director of Fundación Fondo de Acceso a la Justicia in San Juan, a nonprofit that provides legal assistance to low-income families, Martínez-Román has found that that the extra burden placed on women after the storm has translated into leadership.

“The reality is that when you go to communities, mostly it is women as leaders and as community organizers,” Martínez-Román says. This is even more evident In Puerto Rico’s rural areas, where older matriarchs have stayed behind as family members have migrated to city centers or other parts of the U.S. for jobs. Over 300,000 people have migrated to Florida alone since Hurricane Maria.

In the rural locale of Mariana, known for the island’s annual breadfruit festival, Christine Nieves started a community kitchen with the help of elders — all women. Six months after the storm, Mariana, like roughly 12 percent of the island, still does not have electricity. Nieves is ecstatic that her organization, Proyecto Apoyo Mutuo Mariana (Project for Mutual Aid Mariana), recently received a donation of eight solar-powered washing machines (another woman in Connecticut donated the money to purchase them). They will make a tremendous difference for the women who volunteer in the project’s kitchen and help with the other social services they now provide.

Even in rural areas like Mariana, most families have access to a washing machine. But Nieves and others say the power outages turned the clock back, forcing women to take on arduous domestic duties that modern conveniences had eased. Nieves recalls one grandmother apologizing for not being able to help with the meals because her hands were raw from scrubbing clothes. Now, she and others can use the machines in exchange for their time and labor.

Christiana Smyrilli, a civil engineering Phd student at the University of Cambridge in the U.K., recently conducted a study in Puerto Rico on how water and sanitation issues might affect women and men differently. She found that the impact was greater on women because of their household responsibilities. Due to the delayed response in getting clean water to affected residents, men often were responsible for carrying water home from natural water sources or water tanks. But the work of cooking and cleaning and managing limited water supplies fell on women. And the stress of rationing took an emotional toll.

“To me it seemed the women had the physical burden, as well as more mental and psychological burden,” Smyrilli says.

The additional domestic work can make it more difficult for women to recover economically. Spending more time on chores and childcare (due to closed schools), means women have less time open to seek outside employment.

And the stress facing Puerto Rico’s women post-hurricane went beyond home life. The process of getting the territory’s power back has been tortured, and the U.S. has had a series of missteps with companies it has contracted with to provide aid and repair the power grid. The territory has seen an influx of people coming in to rebuild — and despite good intentions, problems have arisen.

“All of a sudden we had tons and tons and tons of men in our communities with big trucks that were really loud,” Nieves recalls. “They were nice when you talked to them, but there was also this weird undertone of ‘Are we going to get some while we are in Puerto Rico?’”

Nieves says she and her friends have encountered instances of sexual harassment, such as male contractors asking how “easy” Puerto Rican women are.

Sexual misconduct, of course, isn’t limited to contractors. After a natural disaster, threats to women’s safety can come from others in the affected population, and even from the aid community. A recent investigation into senior staff with the humanitarian organization OxFam showed workers purchasing sex from women after the devastating earthquake in Haiti. OxFam and others in the aid community have denounced the actions.

Grist spoke with OxFam’s program coordinator in Puerto Rico, Martha Thompson, about what the organization is doing to ensure the same behavior doesn’t happen in Puerto Rico. Thompson says the group is increasing its transparency, and it’s working with Cambridge’s Christiana Smyrilli to better understand the burdens women have faced so far during the recovery.

“We want to make sure people in our team have gone through the sexual-harassment training,” Thompson says.

When women have been displaced, separated from loved ones, and are taking shelter in crowded spaces where tensions are high, the risk of sexual violence heightens. In addition, the breakdown of infrastructure in a storm’s wake makes it more difficult for women to report violence or seek help.

After women came forward with reports of sexual assault in evacuation shelters in the aftermath of Hurricane Katrina, the National Sexual Violence Resource Center partnered with several other U.S. organizations to set up a relief fund for victims. The fund is designed to help put safety nets back in place for survivors by providing aid to victims, repairing rape crisis centers, and helping their affected staff get back to work.

With last year’s unprecedented hurricane season, the fund — which had about $30,000 — was nearly depleted between Harvey, Irma, and Maria. “In the two to three months of those hurricanes, we spent more than had been spent in the entire history of the relief fund,” says Laura Palumbo, the center’s communications director.

After Hurricane Harvey, the National Sexual Violence Resource Center had to quickly raise money in order to provide just $5,000 each to its partners in Puerto Rico and the U.S. Virgin Islands. And with the threat of a higher frequency of stronger storms in the future, thanks to climate change, a critical source of relief for women in disaster zones is being stretched far beyond its means.

“We would have never expected that after hearing from so many individuals and programs in Texas in critical need that we would then instantaneously have Hurricane Maria,” Palumbo says. “We’re now faced with this unfortunate situation of being at square one with raising funds for future disasters.

“That’s always a difficult position because you never know when a disaster will strike.”