In Detroit, 'revolutionary' mapping could help residents with asthma 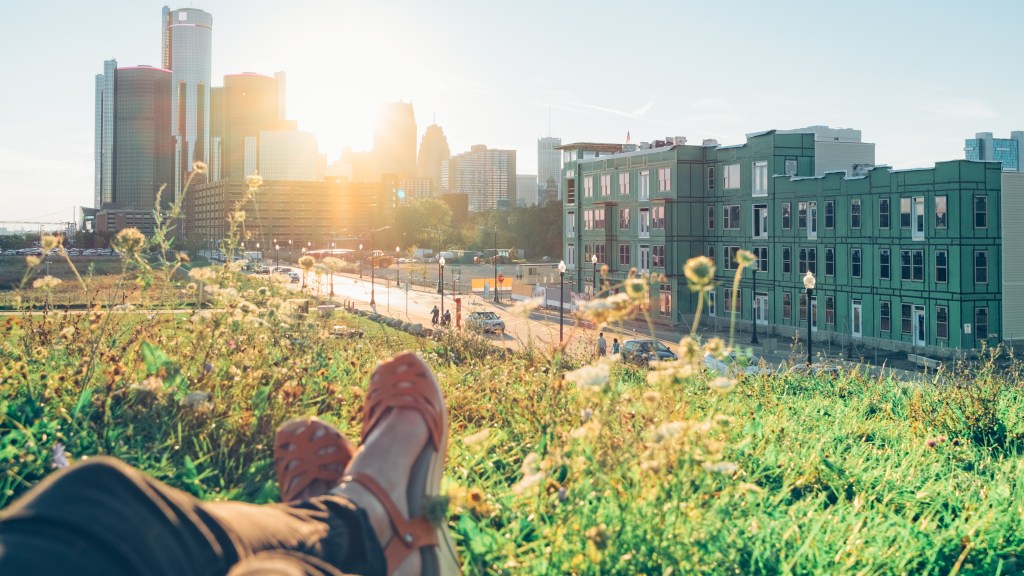 espiegle / Getty Images
there's a map for that

In Detroit, ‘revolutionary’ mapping could help residents with asthma

This story was originally published by Undark Magazine and is reproduced here as part of the Climate Desk collaboration.

Much of Detroit is in ruins. The city spreads over 139 square miles, but about 20 square miles of that — an area just under the size of Manhattan — is vacant. Home in 1950 to more than 1.8 million people, today Detroit has less than half that many residents. There are tens of thousands of abandoned homes and buildings that are crumbling and decaying in the metropolis, and the city is demolishing these structures because they can be, among other things, good hideaways for people with drug addiction and places to dump the bodies of murder victims. Since 2014, teams have razed more than 18,000 buildings, with thousands of demolitions still to come.

But, as the buildings and their concomitant problems begin to fade away, a different menace is filling the lots left behind. Plants and weeds grow with abandon in the newly exposed soils, and, during their growing seasons, those plants release their pollen loads into the air and into Detroiters’ airways. This newly sprouted “urban prairie” can spark human health effects that range from mild irritation to severe asthma attacks.

“What’s happening is, for better or for worse, a lot of Detroit is becoming reforested,” says Daniel Katz, a plant ecologist at ​the University of Michigan School of Public Health. “And so, we have these vacant lots, and first there’s ragweed in them, but then other grasses come in and we get this kind of grassland habitat.”

More than a third of Detroit residents live below the poverty line, and many of the vacant lots where pollen-producing plants now run rampant are in low-income neighborhoods. And although the precise contribution of this increase in pollen is hard to determine, it can’t help but add to the city’s already heavy asthma burden. Detroit currently ranks in the top 10 cities in the U.S. for asthma-related deaths, and a 2016 report revealed that 43.2 percent of asthma-afflicted children who were enrolled in Medicaid in the city had one or more emergency room visits per year for asthma, while the same figure for children in the rest of Michigan stood at 27.5 percent.

Meanwhile, Detroit’s only pollen counting station is in St. Clair Shores, a bedroom community northeast of the city proper. Little is known about the effective radius of pollen counting stations, but one thing is clear: The further an allergy sufferer is from one, the less meaningful its data becomes. That leaves most of inner-city Detroit with little in the way of useful pollen data. And the same is largely true for Americans living beyond the sphere of the several dozen other pollen-counting stations scattered across the United States.

“There are tens of millions of Americans who suffer from allergies, many of them from seasonal allergies caused by pollen exposure,” says Katz, who, alongside fellow researchers, is now using Detroit as a laboratory in which to develop a far more granular means for measuring pollen —and giving the growing number of allergy and asthma patients here and around the nation information they can actually use to manage their conditions. “It’s a serious public health issue,” Katz added, “and it’s one which we do not have a good understanding of.”

Pollen allergies afflict millions of Americans each year. In the industrialized world, pollen allergy rates are on the rise, and with climate change likely driving an increase in airborne pollen loads, experts predict the situation stands to only get worse.

Despite the growing health impacts, there are fewer than 80 pollen counting stations covering the entire United States — and they aren’t always operational. The station near Detroit, for example, sits on the roof of the Saint Clair Allergy and Asthma Center. Recently, the landlord who owns the building that houses the clinic discovered that staff had to climb up on the roof in order to retrieve daily pollen counts, and, citing safety concerns, ordered the shutdown of the sampling station.

Even when they are operational, however, the usefulness of the data collected by this network of stations, experts say, is questionable at best. Certified by the National Allergy Bureau — the section of the American Academy of Allergy Asthma & Immunology that measures things like airborne pollen levels — the stations do provide daily data about the pollen circulating through an area. But, as Katz and other researchers are showing, there is mounting evidence that the type and volume of pollen swirling through a city’s air can vary drastically from neighborhood to neighborhood.

This knowledge gap means that the doctors who treat allergy sufferers are limited in the extent to which they can care for patients, says Alan Baptist, an allergist at the University of Michigan in Ann Arbor who is not directly involved in Katz’s work. Baptist explains that, right now, the main treatment strategies doctors like him use fall into three categories: medication, immunotherapy, and avoidance.

That third approach — avoidance — is next to impossible, thanks to the near-complete lack of knowledge about how pollen loads vary from neighborhood to neighborhood. “We don’t have the tools yet to really accurately predict high pollen days,” he says. Right now, the best information a doctor like him can give a patient is not very useful: “We’ll say: ‘In the springtime, the tree pollen levels are going to be high, in the summer it’ll be the grass, and in the fall, it’ll be the weeds,’” Baptist says.

A few years ago, Katz shadowed Baptist while he treated allergy patients at the Northville Health Center in suburban Detroit. One patient, a man, would visit the center, and his eyes, for a week or two each year, would swell when exposed to something — “presumably tree pollen,” Katz says — and they would swell so badly that he couldn’t drive. Another patient, an elderly woman, was allergic to tree pollen, grass pollen, and weed pollen. She had gone through immunotherapy and would take over-the-counter medications like Zyrtec, Allegra, and Flonase, but her symptoms persisted.

At one point, Katz recalls Baptist turning to him with a question: “‘Patients might enjoy knowing what it is they’re allergic to, but what am I going to do with that information?’”

Katz and his team are now trying to answer that question. Donning a neon orange vest — a tack designed both for safety while working next to roads and to help avoid being mugged, Katz says — and driving a beat-up rental minivan he uses for his fieldwork, Katz surveys the Motor City’s vacant lots. They are not hard to find.

One site is near Comerica Park, the $300 million home of the Detroit Tigers. In the lot, Katz and his field assistant set up a tripod, and atop the tripod they affix a black box that has what looks like a little airplane propeller sticking out of one end. The propeller blades have adhesive on them to catch the pollen hovering in the air, and when Katz flips a switch, the propeller spins to life, capturing samples for later analysis under a microscope.

Katz sets up several of these custom-designed pollen counting stations at various sites across the city on a given day, in order to capture how day-to-day pollen levels vary by neighborhood. One type of pollen hitting the propeller blades comes from ragweed, a plant with little green flowers blooming from a slender stem. The flowers look like sleigh bells on a handle, and those flowers, when jingled, spew yellow pollen grains into the air.

In addition to this monitoring work, Katz and his team look at aerial images and use remote sensing technology to detect where vacant lots are in order to estimate the total volume of ragweed in the city and its location. According to their modeling, ragweed alone spews 3.12 trillion grains of pollen across Detroit every year. By factoring in when plants release their pollen during their growing season into their models, they’re then able to create forecasts of pollen concentrations across a city. Very much like a snapshot of radar weather data, Katz and his colleagues say they can create maps that show where in town ragweed is likely to be high, and where it will be low, something that has never been done before.

This stands to give Detroiters who suffer from things like hay fever extremely accurate pictures of parts of town that they should avoid. Other researchers, including Andrew Dzul, a retired allergist who used to work at the Saint Clair Shores Allergy and Asthma Center, say Katz’s measuring techniques are promising: “He discovered some revolutionary ways of counting pollen,” Dzul says.

Whether and when that information will make it into the hands of everyday consumers and allergy sufferers, of course, remains an open question — though Baptist says it’s exactly this sort of thing he and doctors around the world could one day use to help patients. “If you had an accurate map, and you knew where you were going to be, you could say ‘I know I’m going to have to exercise outdoors on this day, I’m playing a sport for example on this day, this is a day that I need to be sure that I take my asthma medicine, my allergy medicine, for example” Baptist says.

With the pieces in place, Katz says he eventually plans to give doctors and patients the data they need through a smartphone app, but Lewis Ziska, a plant physiologist formerly with the U.S. Department of Agriculture, cautions that we are a long way from putting pollen maps in patients’ hands, mostly due to the fact that the kind of funding support needed for such an undertaking does not exist.

Still, he adds that Katz’s pollen mapping of Detroit put the deficiencies of having a single pollen counting station for an entire region in stark relief.

“I’m hoping that it’s an inspiration for others to do more of this kind of research,” Ziska says.