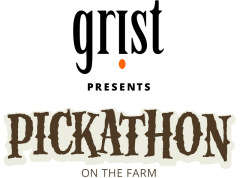 Ready to be transported to the cool jazz club of your imagination? Listen to “Final Thought” by Kamasi Washington, an inventive saxophonist-composer who’s been called “the John Coltrane of hip-hop.” This performance took place at last year’s Pickathon festival.

Even if you haven’t heard Washington’s name before, you have probably heard his sweet saxophone sounds — he’s the tenor sax player on Kendrick Lamar’s Grammy-nominated album “To Pimp a Butterfly.” And let’s not forget about Washington’s impressive solo album, “The Epic,” which comprises three hours of dramatic contemporary jazz.

Like what you hear? We’ll leave you with some final thoughts of our own: The 2016 Pickathon festival is only seven months away, the lineup was just announced, and tickets just went on sale. And don’t forget to tune in to Grist each month for more exclusive, intimate performances from the 2015 festival as part of our On The Farm series.

Exclusive: Tap your toes to a catchy tune by The Easy Leaves

Get your twang on with this livestream of the Pickathon festival