John Hickenlooper has a curious connection to a Trump Cabinet secretary 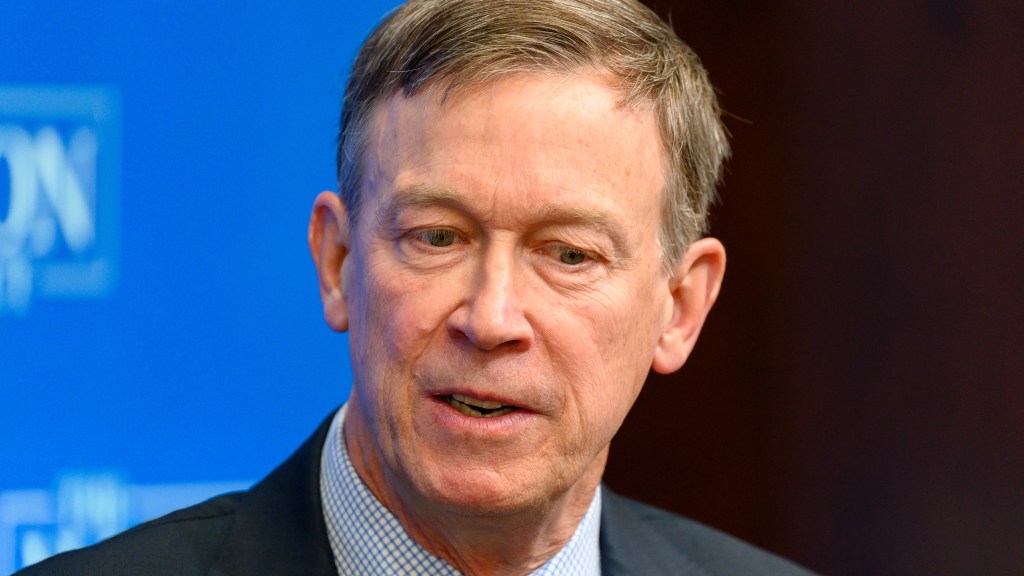 John Hickenlooper has a curious connection to a Trump Cabinet secretary

Former Colorado Governor John Hickenlooper’s ties to the oil and gas industry run deep, especially when compared to those of other candidates in the unwieldy 2020 Democratic field. In some ways, given that Hickenlooper served two terms in the fifth-largest oil-and-gas-producing state, these connections are not surprising. But what may be less apparent is that his government service also intersected with David Bernhardt, the new secretary of the Interior responsible for opening public lands to industry development. Hickenlooper has also often ended up aligned with Bernhardt’s former law and lobbying firm, Brownstein Hyatt Farber Schreck, on matters regarding fracking, the use of public lands, and support for the oil and gas industry over the interests of consumers.

Any governor of Colorado, no matter what party, would inevitably come into contact with the firm, which represents dozens of clients across the energy sector alone. His own chief of staff, Doug Friednash, came from Brownstein in 2015, only to return to it again before the governor’s tenure ended last year. Hickenlooper has been dubbed “Frackenlooper” by critics who claim he’s prioritized major oil and gas development at the expense of citizen activism.

Brownstein is one of the most profitable lobbying firms in the country, and its influence naturally extends into Colorado government as well. According to the Denver alt-weekly Westword, “When there’s a hot political issue in Colorado, the Brownstein firm usually has a seat at the table … and sometimes more than one.”

Now, internal emails reveal how the law firm enjoyed a seat at the table very close to the governor’s. They show how Brownstein became a conduit for the relationship between Hickenlooper’s administration and one of its most prominent Colorado clients, the Colorado Oil and Gas Association (COGA), an industry group that led the way in trying to thwart local attempts to restrict fracking. In this matter, pitting local communities against the fossil fuel industry, Bernhardt, who was the chair of Brownstein’s natural resources division, and Hickenlooper’s administration repeatedly fought on the same side to clear hurdles to drilling.

In 2012 and 2013, two Colorado towns, Longmont and Fort Collins, had placed a moratorium on fracking development. The communities, worried about potential groundwater contamination, argued that municipalities should have the right to reject Colorado’s fracking expansion, setting up a face-off with the considerably more lax Colorado Oil and Gas Conservation Commission, whose appointments by the governor often include regulators with extensive energy sector connections.

Hickenlooper’s administration sued Longmont and Fort Collins for preempting state law, and, on behalf of COGA, Brownstein sued them in a case that worked its way all the way up to the state Supreme Court. Before becoming Ryan Zinke’s deputy at the Department of the Interior, Bernhardt was the energy and natural resources chair at the firm with broad responsibilities and a long list of his own clients in the oil sector. In 2016, the state Supreme Court struck down the bans in Longmont and Fort Collins, setting a precedent statewide and providing a big win for Brownstein, Hickenlooper, and COGA.

“We appreciate the Supreme Court’s guidance on balancing private property rights and local government jurisdiction of oil and gas operations in Colorado,” Hickenlooper said in a celebratory statement that struck his usual theme of working with industry, not against it. “We’ll continue to work creatively and energetically with communities and industry to ensure our world-class environment is protected while remaining a place that is welcoming to business and jobs.”

It is unclear how direct a role Bernhardt played in the industry’s fight as chair of the natural resources division, and the matter doesn’t appear on the listed conflicts of interest in his ethics disclosure. But he was front and center celebrating his firm’s victory in a May 2016 press release issued from the firm: “This case involved precedent-setting issues pertaining to state preemption of oil and gas activities,” Bernhardt said in a statement commending his employee, whose “knowledge of energy and land use law were on exceptional display in front of the Supreme Court, showing the depth and breadth of our team.”

A few months after the 2016 state Supreme Court win, environmental activists were gathering signatures for a pair of ballot initiatives, Nos. 75 and 78, that would have given municipalities the power to ban fracking and force fracking operations to be located 2,500 feet from occupied buildings. COGA objected to the efforts and sought a series of meetings, including getting oil and gas executives on the “governor’s dance card” to plot a strategy to defeat or at least undermine the initiatives, according to emails obtained through state requests by the watchdog group Documented and shared with Mother Jones.

The ballot initiatives barely gathered support, and neither one cleared the threshold for enough valid signatures to make the 2016 cycle. Activists tried again in 2018 with Proposition 112, a state initiative that would have required the sites for new oil and gas wells to be located more than 2,500 feet away from any occupied building — schools, homes, and sensitive areas — because of health concerns. Once more, Hickenlooper was on the side of COGA and opposed Proposition 112, arguing that the measure would impose excessive burdens on the economy and state budget. Both the governor and COGA pointed to the estimate that 85 percent of non-federal lands would be off the table. The industry contributed $38 million to help defeat it and back a different initiative, which also failed.

Nonetheless, before leaving office in 2018, the state commission struck a compromise ahead of a newly elected Democratic wave, unanimously approving a more narrow order setting new fracking operations back 1,000 feet from schools.

Now Hickenlooper is on the campaign trail, Bernhardt is running the Department of the Interior, and COGA is working with the Colorado arm of the American Petroleum Institute in its next fight: preventing the new Democratic majority in Colorado from passing a law to give local entities more power to curb fracking. Tracee Bentley, Hickenlooper’s legislative director at the time, started the American Petroleum Institute’s Colorado arm in 2015 and is working on the side of oil and gas on this effort.

Last year, Bentley hosted an American Petroleum Institute roundtable in which she sounded the alarm about citizen efforts to rein in the oil industry and praised compromise in terms that Hickenlooper now echoes on the campaign trail. “I know that the key to our success is collaboration,” she said in a statement, “and we will continue to work hand-in-hand with government partners, communities and stakeholders alike to ensure that our shared future betters the lives of all Coloradans.”