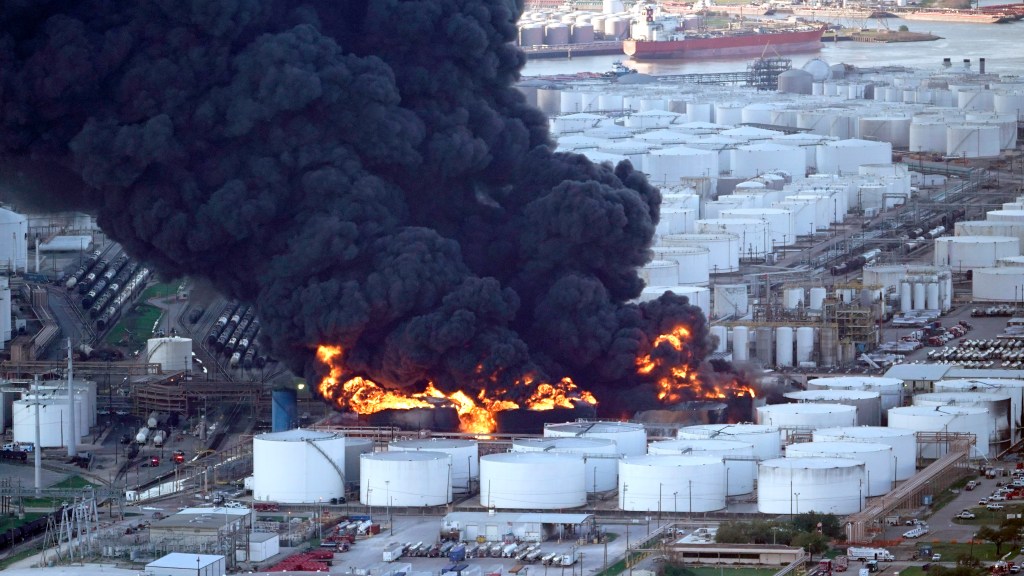 This story has been updated with one correction and to clarify some of the nature of past accusations made against the Center for Toxicology and Environmental Health, as well as to incorporate responses from the company.

A crude oil spill during Hurricane Katrina in 2005. A coal ash spill in Tennessee in 2008. The BP oil spill in 2010. In all three cases, the companies responsible for these environmental calamities turned to the same Arkansas-based consulting firm, the Center for Toxicology and Environmental Health, to monitor air and water quality and workers’ chemical exposure.

And each time, CTEH was later accused of mishandling data collection. And companies used CTEH’s findings to reassure people that the spilled chemicals posed little risk to public health.

This week, a fire at International Terminals Company’s chemical storage facility outside Houston blanketed the country’s fourth-largest city in a cloud of smoke. Multiple school districts in the area cancelled classes.

Once again, CTEH got the call to provide air quality monitoring.

The fire at ITC’s facility reignited late Friday afternoon after a dike wall used to contain chemicals partially collapsed, renewing concerns about air quality. According to initial reports, the company released 9 million pounds of pollutants in just the first day of the fire. On Thursday, the city of Deer Park, home to the facility, issued a shelter-in-place advisory after benzene levels spiked overnight. Long-term benzene exposure can cause anemia, lead to cancer, and damage women’s reproductive health.

Earlier in the week, ITC had said that its air quality testing data showed conditions “below levels” that would raise health concerns, even as residents near the fire complained of nosebleeds, headaches, and irritated throats. The statement prompted Deer Park to lift an earlier shelter-in-place advisory.

Elena Craft, senior director for climate and health at Environmental Defense Fund, said CTEH was a “concerning choice” as a consultant “given their history.” ITC has posted nine air quality monitoring reports produced by CTEH on its website since the Deer Park fire began and Craft, a toxicologist by training, said that at least one contained “clear, obvious errors.” Craft characterized CTEH’s work in putting together the reports as “a sloppy job.”

In that report issued on March 18, CTEH said it used two types of instruments with different detection limits to measure benzene levels. The company initially reported that it had collected just six samples with the instrument that had a lower detection limit — meaning it could pick up lower levels of airborne benzene. CTEH later said that figure was a typo and that it had collected more than 60 samples with the more sensitive instrument and didn’t detect benzene. The company also updated its reports to reflect the correct detection limit after being contacted by Grist.

In a written statement to Grist, Phil Goad, CTEH’s founder, said that in its more than 20 years in business “CTEH has never been cited for inaccurate or misleading data.” The company’s “top priority is, and will continue to be, to safeguard public health,” he said, adding its air quality-monitoring plans in Houston have been approved by the Environmental Protection Agency and Texas Commission on Environmental Quality.

In the last two decades, CTEH has come under fire for its work in high-profile environmental contamination cases across the country. In 2005, a storage tank at a Murphy Oil refinery in Louisiana released more than 25,000 barrels of crude oil into floodwaters, affecting roughly 1,700 homes in the New Orleans suburb of Chalmette.

Murphy Oil hired CTEH to conduct soil testing. In guidelines issued in the aftermath of the hurricane, the EPA required contractors testing soil to take “grab samples.” A news article and an environmental group reported that CTEH had instead collected “composite” samples.* A report submitted two years later by an EPA contractor noted that the company had used both sampling methods.

CTEH, for its part, maintains that it followed a work plan approved by state and federal regulators. Murphy Oil then used CTEH’s test results to persuade residents not to sue the company.

In 2008, the Tennessee Valley Authority hired the consulting firm after coal ash from its Kingston Fossil plant in Roane County, Tennessee, spilled into the Emory River. A 2010 EPA audit, without naming contractors TVA hired to conduct air monitoring, later found that the methods used to survey air quality “failed to meet quality assurance standards.” CTEH says that the findings have been “falsely attributed” to the company and that it worked with TVA only on a “short-term, emergency contract.”

Two years later, BP hired the company to serve as the primary monitor for its offshore workers, collecting health and chemical exposure data in the aftermath of the Deepwater Horizon spill. Two lawmakers urged BP to stop working with CTEH, a company that they said had “a long history of questionable practices” and “of releasing findings defending the corporate interests that employ them.”

CTEH is not the only entity collecting air quality data around the Deer Park fire. The Texas Commission on Environmental Quality, the Environmental Protection Agency, and Houston’s own Harris County have all deployed air monitors to survey pollution levels. The U.S. Chemical Safety Board, an investigatory body that doesn’t have the authority to fine or regulate companies, is also looking into the cause of the fire.

Correction: An earlier version of this article suggested that CTEH intentionally ignored EPA guidelines for soil testing at the Murphy Oil site in 2005. The piece has been updated to reflect that there appear to be discrepancies between what the EPA recommended and the testing CTEH performed.