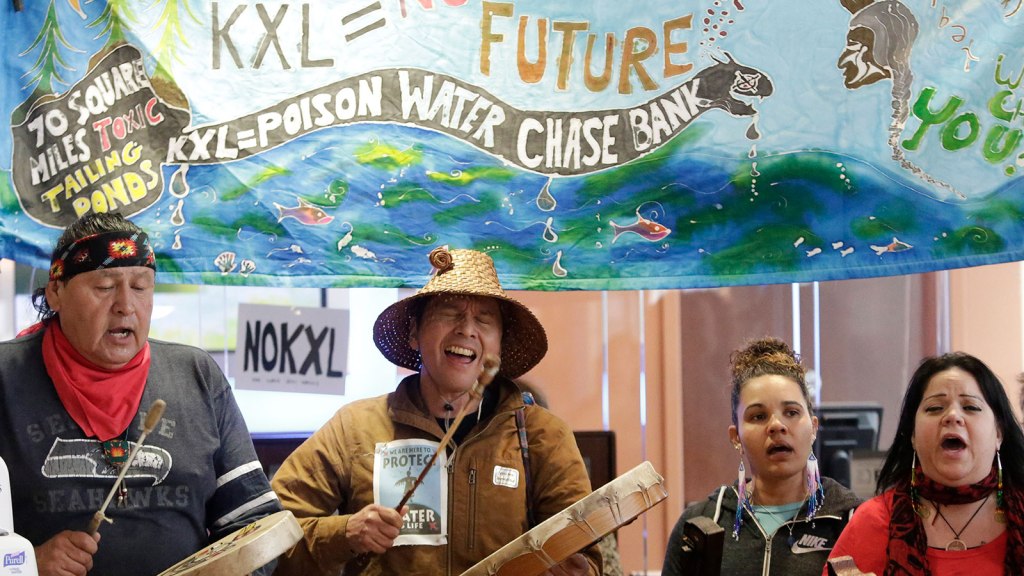 Construction on the controversial Keystone XL pipeline is set to rev up next year. The project received a green light from the State Department late last week — the latest salvo in a contentious decade-long battle between indigenous communities and TransCanada, the pipeline’s developer.

On Friday, the State Department issued a 338-page supplemental environmental impact statement for an alternate route through Nebraska. The agency has determined that major environmental damage stemming from the $8 billion, 1,180-mile project would be “negligible to moderate.” According to the report, there will be safeguards in place that would prevent a leak from contaminating ground or surface water.

“Keystone XL has undergone years of extensive environmental review by federal and state regulators,” TransCanada spokesperson Matthew John said. “All of these evaluations show that Keystone XL can be built safely and with minimal impact to the environment.”

The review comes a little more than a month after a Montana court required the State Department to conduct a separate analysis — not part of the pipeline’s 2014 environmental impact study — of the updated route under the National Environmental Policy Act. The new route will be longer than TransCanada’s preferred route.

Following the release of the environmental assessment, TransCanada lawyers filed a response on Friday to address concerns by environmental and indigenous groups that are challenging the pipeline’s permit to cross into the U.S. from Canada in the Montana court.

But as TransCanada moves ahead with plans to construct the pipeline — which would carry up to 830,000 barrels of heavy crude from Canada’s oil sands in Alberta to Steele City, Nebraska — tribal communities living in its path remain steadfast in challenging the review’s conclusions.

“It’s a total disregard for the land, and the animals, and the people that reside on it and have for generations,” Faith Spotted Eagle, a member of the Yankton Sioux Tribe in South Dakota and a vocal opponent of major oil-pipeline projects like the Keystone XL pipeline and the Dakota Access pipeline, told Grist. “I think the thing to remember is that the people who are building this pipeline — they don’t care because they don’t have to live here. But it’s not going to stop me from fighting back.”

Pipeline-opponents on the front lines like Spotted Eagle are gearing up for what comes next, pledging to fight until the pipeline project is halted for good. Earlier this month, the Fort Belknap Indian Community of Montana and the Rosebud Sioux Tribe of South Dakota sued the Trump administration after it granted the pipeline a permit which they claimed didn’t assess how it’s construction “would impact their water and sacred lands.”

Indigenous groups aren’t the only ones voicing their discontent — the Sierra Club called the new State Department report a “sham review.” “We’ve held off construction of this pipeline for 10 years, and regardless of this administration’s attempts to force this dirty tar sands pipeline on the American people,” said Kelly Martin, director of the group’s Beyond Dirty Fuels campaign. “That fight will continue until Keystone XL is stopped once and for all.”

Members of the public have 45 days to comment on the State Department’s review, but Spotted Eagle is skeptical that the powers that be will even bother to consult with indigenous people residing in the pipeline’s route. “There is no regard to nation-to-nation relationships with tribes,” she says.