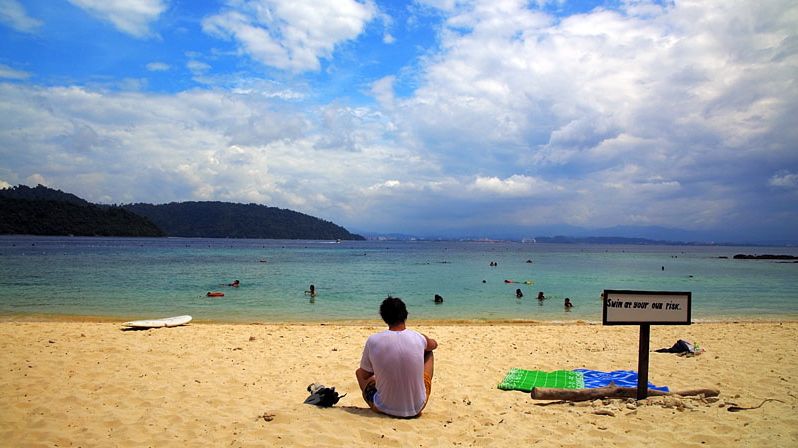 Want to grab lunch with a massive great white shark? Turns out, like just about every other ridiculous thing on you can imagine, there’s an app for that. The nonprofit research group OCEARCH has developed Global Shark Tracker, an app and accompanying website that use GPS tags to show you where the sharks are.

OCEARCH researchers hook great whites, tiger sharks, and other large predators, then lift them out of the water, un-sedated, on an enormous platform, for testing and to attach their GPS tags. After that, when the sharks surface, their tags ping a satellite, updating their location. The site currently lists almost 100 fish by name that can be tracked individually, along with the group’s ship, the M/V OCEARCH.

It was there that I learned that Oprah is not in Chicago, but is actually patrolling the seas off the coast of South Africa. (Turns out this Oprah is an immature great white who, when she was tagged two years ago in Mossel Bay, was just under 10 feet long and weighed in at a dainty 686 pounds.) I wonder when they’ll tag Steadman?

The Tampa Bay Times had this to say after a recent visit from 14-foot great white Katherine:

Other than the intrinsically cool aspect of knowing where great whites are heading from day to day, why is this research so important?

Great whites are “the lions of the ocean,” said [Chris] Fischer, who founded the research institute in 2007 after he decided to end a successful fishing show and get into research because of his love of the oceans. “They keep the balance in the oceans. Without them, there would be no fish.”

So far, OCEARCH has gone on 19 expeditions and tagged 150 sharks, about 50 of which are still pinging. If they do discover the nursery, they plan on tagging the juvenile sharks and following them to learn further how they impact the ocean.

You can even follow your favorite fish on Twitter. Mary Lee, for instance, has over 3,500 followers. (The only thing more troubling than the realization that you have fewer followers than a fish incapable of typing is getting the Twitter notification that you are now being followed by Mary Lee the shark.)

So let’s say you’re planning a trip to the shore? You check your iPhone, and — Great! So is Mary Lee! And she’s a ton of fun!

Well actually, she’s 16 feet long and weighs in at 3,456 pounds, so closer to two tons, but I stand by the fun. She’s got a great smile. Just say elephant seal!