Louisville, Kentucky, is the nation’s fastest warming “urban heat island.” Local temperatures in the center of this city of 250,000 are significantly warmer than in surrounding rural areas, thanks to a uniquely sparse — and rapidly diminishing — urban tree canopy. Cars, parking lots, buildings, and heat-trapping construction materials don’t help, either. The effects of UHI vary from neighborhood to neighborhood; some spots can be as much as 10 degrees warmer than others within city limits. For the most vulnerable locals, the effect can be lethal: an analysis of the scorching summer of 2012 showed 53 people in the Louisville area alone died from causes likely related to human-amplified temperatures. Climate change is making things worse. 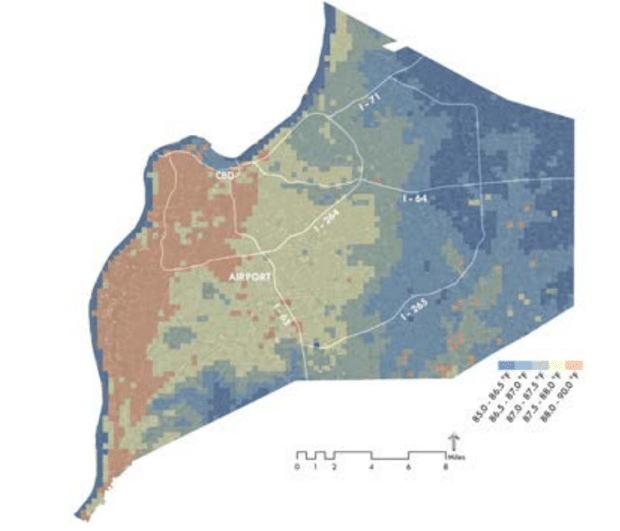 But the Derby City also has unique strengths to play on. For one, America’s “city of compassion” is home to a growing diversity of religious communities, celebrated every year with the internationally recognized, week-long Festival of Faiths. Now, environmental and spiritual leaders are teaming up to help some of Louisville’s heat-fighting strategies take root in vulnerable neighborhoods — and to better align preaching and teaching with the city’s environmental needs.

“This is about talking to folks we’re not used to talking to,” says Chris Chandler, the director of the Nature Conservancy’s urban conservation program. The Conservancy has partnered with the city of Louisville to help it deploy science-backed cooling strategies. “It’s about creating allies and working across different communities in an inclusive way with new people.”

The need for such outreach reflects the often-fractious relationship between the faith community and the secular one on climate issues: Surveys show that certain religious groups in the U.S. show less concern than others about environmental issues; many reject the influence of climate scientists and advocates like those at the Nature Conservancy. But a growing contingent of religious groups — including Evangelical Protestants, a group that represents the majority of believers in the Louisville area — are squaring their faith with science’s climate warnings. Some call it “creation care.”

A vast body of research shows keeping urban canopies healthy and robust is one of the best guards against UHI. According to a pioneering 2015 study commissioned by Louisville, a 40 percent increase in urban tree cover in U.S. cities was found to decrease air temperatures by up to 10 degrees. More than 20 percent of annual heat-related deaths in Louisville could be avoided through city-led actions like robust tree-planting, according to Brian Stone, a UHI expert at Georgia Tech and the author of the 2015 study.

But getting local property owners on board with tree-planting, especially in the neighborhoods that need shade most, is another question, Chandler says. The areas with the smallest share of canopy cover — and the hardest-hit by UHI — often have a lot other problems to contend with: racial and economic disparities, plus years of chronic neglect by the city. Planting and tending trees takes money and time. Yet the cooling benefits of healthy trees only accrue when entire neighborhoods invest in the effort.

If his organization was going to help Louisville, it needed to tap heavy influencers within its communities, Chandler realized, to see if they were willing to be models of environmental care. After attending a Festival of Faiths a few years ago, it hit him: Houses of worship are bedrocks of community life in Louisville, and many of the city’s churches, mosques, and temples are already connected through the festival. So the Conservancy approached the Center for Interfaith Relations (CIR), the group that organizes the festival and promotes other expressions of interfaith action, to develop a landscape “audit” designed especially for religious communities. CIR leapt at the opportunity.

“Talking about the environment wasn’t a random subject for us,” says Sarah Reed Harris, the managing director of CIR. Every mainline religion teaches the concept of planetary “stewardship” in one way or another, and green issues have been a frequent topic of conversation at the festival. The scope of threats to life on Earth has clearly grown, she says. “What is new is the practice. It’s how to express stewardship in a contemporary context.”

After a series of focus groups, the CIR recruited participants from an all-boys Catholic high school, an Episcopal church, and a mosque — all located in particularly hot spots around Louisville — to pilot a four-part landscape audit this past fall. The groups are now planning to overhaul their landscaping practices. But as a first step, they took an inventory of all the trees on their properties using the Conservancy’s Healthy Trees, Healthy Cities App. That app shows the environmental, economic, and health benefits of individual tree species, which helps users understand how landscaping choices can serve them or not.

Second, the auditors mapped parts of their properties that best support wildlife and pollinators with another online tool. This doesn’t directly assist with cooling down landscapes, exactly, but birds and butterflies are a very effective way to draw people to nature. Next, the participants analyzed their landscape maintenance practices, looking for energy-reducing improvements.

These three steps could serve any kind of property owner, religious or secular. It’s the last part of the audit sets it apart. Here, participants answered a series of questions that probed how the environment is woven into their faiths. Are there local wildflowers on altars and centerpieces? Are religious leaders holding services outdoors? Are sermons and teachings infused with observations about the local environment? “This is really about creating a change we can’t measure,” says Halida Hatic, CIR’s director of community relations and development. “It’s about reaching a broad base of people, and hopefully changing their own connection between faith and the outdoors.”

Sikander Chowhan, chief strategic officer at Muslim Americans for Compassion and former board member at the River Road Mosque, served as the point of contact for the mosque’s auditing work. Prior to the audit, Chowhan says, his mosque had never appreciated how an overgrown wooded expanse in the back of its property could tie into Islamic teachings. Now, armed with scientific knowledge on how to put that tangle of trees to better service, Chowhan is spearheading plans to clear a small nature trail and plant a wildflower garden. The very act of revamping the landscape will serve as a conversation starter among congregants, and maybe even a topic at services. He quotes the Quran: “And do good as Allah has been good to you. And do not seek to cause corruption in the Earth.”

“Faith-based organizations are the places people look for direction,” he says. “So hopefully we’ll get folks seeing what we’re doing to make things more beneficial, and becoming more aware of their own properties.” 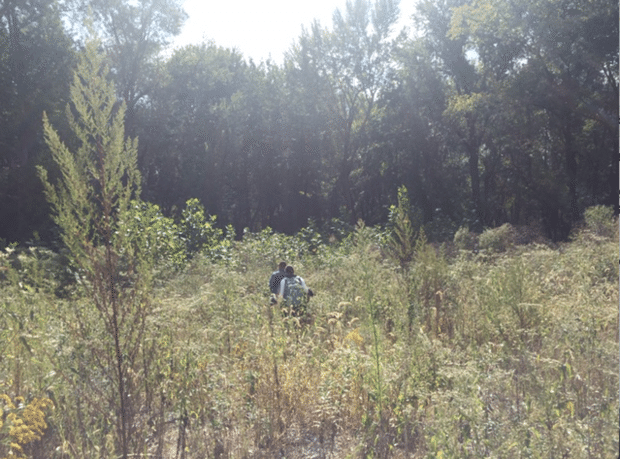 That’s the hope of the Nature Conservancy. At the very least, perhaps the intentions and goals of audit will trickle down to congregants. Meanwhile, feedback from the Louisville pilot is guiding the Conservancy as it packages the four-step audit into a ready-made, online handbook that any faith-based organization can use, accessible on the Conservancy’s website and that of GreenFaith, an organization specializing in connecting religious groups to conservation practices.

The faith-based landscape audit is one small heat-fighting action among many others in Louisville. Following the recommendations of the 2015 study, Mayor Greg Fischer has set a goal of attaining a 45 percent tree canopy coverage citywide. The city is rounding out incentive programs to encourage all kinds of property owners to revamp rooftops and lawns to deflect more heat, and it’s revising its land-use plan to include trees and other natural infrastructure options to cool cities.

These actions can serve as models for other places battling UHI — which is to say, nearly every city. Engaging communities through their places of worship seems a particularly promising approach. Progressive proponents of environmental causes often forget that nearly 90 percent of American adults say they believe in God with at least some level of certainty. With the global climate forecast growing increasingly apocalyptic, it may be the time for climate advocates to make a leap of faith.