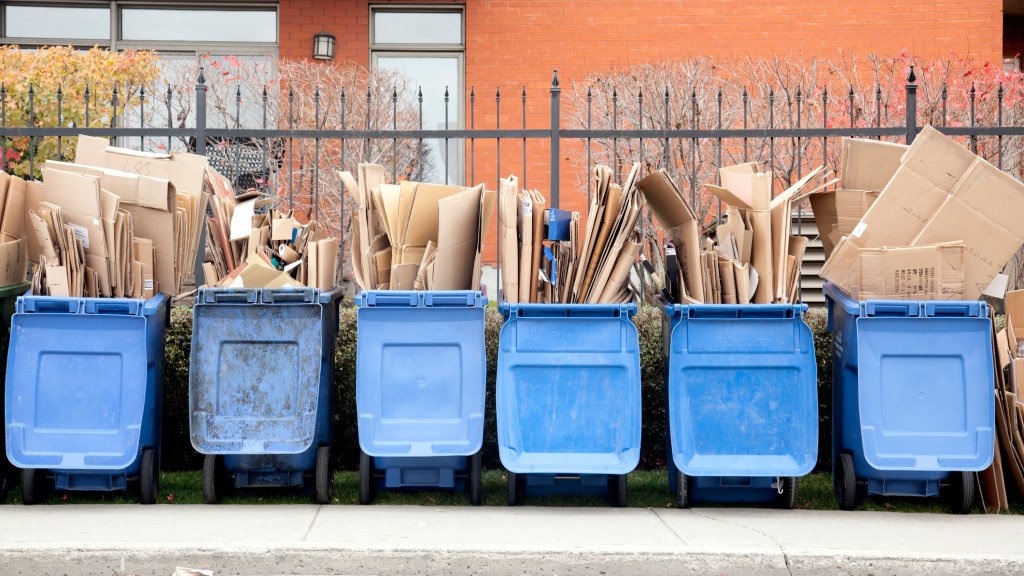 The conscientious citizens of Philadelphia continue to put their pizza boxes, plastic bottles, yogurt containers, and other items into recycling bins.

But in the past three months, half of these recyclables have been loaded onto trucks, taken to a hulking incineration facility, and burned, according to the city’s government.

It’s a situation being replicated across the U.S. as cities struggle to adapt to a recent ban by China on the import of items intended for reuse.

The loss of this overseas dumping ground means that plastics, paper, and glass set aside for recycling by Americans is being stuffed into domestic landfills or is simply burned in vast volumes. This new reality risks an increase of plumes of toxic pollution that threaten the largely black and Latino communities who live near heavy industry and dumping sites in the U.S.

About 200 tons of recycling material is sent to the huge Covanta incinerator in Chester City, Pennsylvania, just outside Philadelphia, every day since China’s import ban came into practice last year, the company says.

“People want to do the right thing by recycling but they have no idea where it goes and who it impacts,” said Zulene Mayfield, who was born and raised in Chester and now spearheads a community group against the incinerator, called Chester Residents Concerned for Quality Living.

“People in Chester feel hopeless — all they want is for their kids to get out, escape. Why should we be expendable? Why should this place have to be burdened by people’s trash and shit?”

Some experts worry that burning plastic recycling will create a new fog of dioxins that will worsen an already alarming health situation in Chester. Nearly four in 10 children in the city have asthma, while the rate of ovarian cancer is 64 percent higher than the rest of Pennsylvania and lung cancer rates are 24 percent higher, according to state health statistics.

The dilemma with what to do with items earmarked for recycling is playing out across the U.S. The country generates more than 250 million tons of waste a year, according to the Environmental Protection Agency, with about a third of this recycled and composted.

Until recently, China had been taking about 40 percent of U.S. paper, plastics, and other recyclables, but this trans-Pacific waste route has now ground to a halt. In July 2017, China told the World Trade Organization it no longer wanted to be the end point for yang laji, or foreign garbage, with the country keen to grapple with its own mountains of waste.

Since January 2018, China hasn’t accepted two dozen different recycling materials, such as plastic and mixed paper, unless they meet strict rules around contamination. The imported recycling has to be clean and unmixed — a standard too hard to meet for most American cities.

It is “virtually impossible to meet the stringent contamination standards established in China,” said a spokesperson for the city of Philadelphia, who added that the cost of recycling has become a “major impact on the city’s budget,” at around $78 a ton. Half of the city’s recycling is now going to the Covanta plant, the spokesperson said.

There isn’t much of a domestic market for U.S. recyclables — materials such as steel or high-density plastics can be sold on but much of the rest holds little more value than rubbish — meaning that local authorities are hurling it into landfills or burning it in huge incinerators like the one in Chester, which already torches around 3,510 tons of trash, the weight equivalent of more than 17 blue whales, every day.

“This is a real moment of reckoning for the U.S. because of a lot of these incinerators are aging, on their last legs, without the latest pollution controls,” said Claire Arkin, campaign associate at Global Alliance for Incinerator Alternatives. “You may think burning plastic means ‘poof, it’s gone’ but it puts some very nasty pollution into the air for communities that are already dealing with high rates of asthma and cancers.”

Hugging the western bank of the Delaware River, which separates Pennsylvania and New Jersey, Chester City was once a humming industrial outpost, hosting Ford and General Motors plants. Since the war, however, Chester has been hollowed out, with an exodus of jobs ushering in an era where a third of people live in poverty.

The industry that remains emits a cocktail of soot and chemicals upon a population of 34,000 residents, 70 percent of them black. There’s a waste water treatment plant, a nearby Kimberly-Clark paper mill, and a medical waste facility. And then there’s Covanta’s incinerator, one of the largest of its kind in the U.S.

Just a tiny fraction of the trash burned at the plant is from Chester — the rest is funneled in via truck and train from as far as New York City and North Carolina. The burning of trash releases a host of pollutants, such as nitrogen oxides, sulfur dioxides, and particulate matter, which are tiny fragments of debris that, once inhaled, cause an array of health problems.

It’s difficult to single out the exact cause of any cancer, but a host of studies have identified possible links between air pollution and ovarian and breast cancers, which are unusually prevalent in Chester. A 1995 report by the EPA found that air pollution from local industry provides a “large component of the cancer and non-cancer risk to the citizens of Chester.”

“There are higher than normal rates of heart disease, stroke, and asthma in Chester, which are all endpoints for poor air,” said Marilyn Howarth, a public health expert at the University of Pennsylvania who has advised Chester activists for the past six years.

Howarth said residents now risk a worsened exposure to pollution due to increased truck traffic rumbling through their streets, bringing recycling to the plant. Once burned, plastics give off volatile organics, some of them carcinogenic.

“It is difficult to link any single case of cancer, heart disease, or asthma directly to a particular source. However, the emissions from Covanta contain known carcinogens so they absolutely increase the risk of cancer to area residents.”

Covanta say that pollution controls, such as scrubbers in smokestacks, will negate toxins emitted by recyclables. After passing through the emissions control system, the plant’s eventual output is comfortably below limits set by state and federal regulators, the company says, with emissions of dioxins far better than the expected standard.

The company also argues that incineration is a better option than simply heaping plastic and cardboard in landfills.

“In terms of greenhouse gases, it’s better sending recyclables to an energy recovery facility because of the methane that comes from a landfill,” said Paul Gilman, Covanta’s chief sustainability officer. “Fingers crossed Philadelphia can get their recycling program going again because these facilities aren’t designed for recyclables, they are designed for solid waste.”

Covanta and its critics agree that the whole recycling system in the U.S. will need to be overhauled to avoid further environmental damage. Just 9 percent of plastic is recycled in the U.S., with campaigns to push up recycling rates obscuring broader concerns about the environmental impact of mass consumption, whether derived from recycled materials or not.

“The unfortunate thing in the United States is that when people recycle they think it’s taken care of, when it was largely taken care of by China,” Gilman said. “When that stopped, it became clear we just aren’t able to deal with it.”