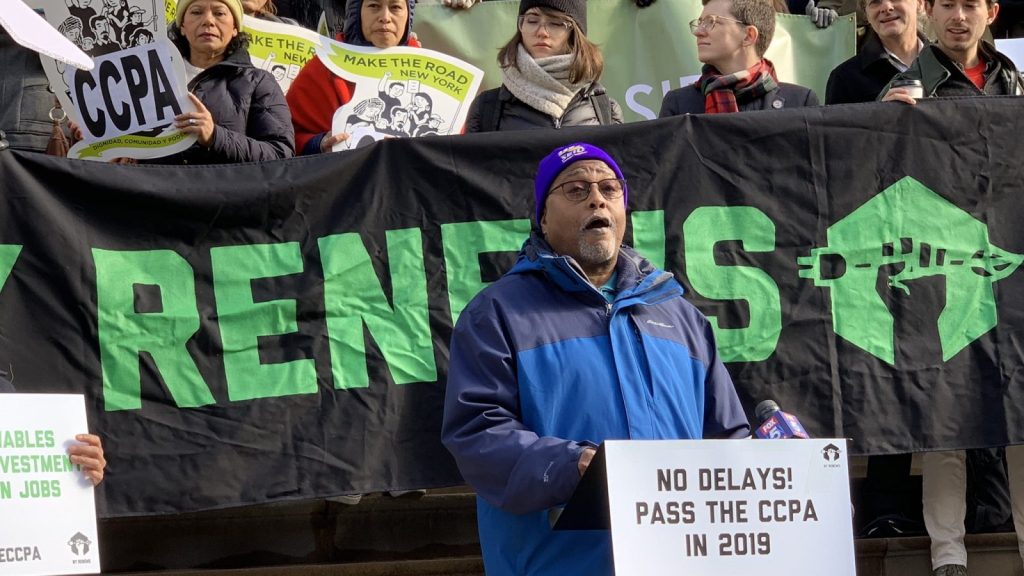 Walter Cooper, a labor union leader, stood on the steps of New York City Hall to fight for new kind of contract.

“We need a contract for a future of our state and for our communities,” Cooper said in support of the Climate and Community Protection Act, a bill making its way through the state legislature.

Cooper’s labor union is part of New York Renews, a broad coalition of 160 labor, climate, and community groups that has been pushing for climate justice since 2015. The Climate and Community Protection Act would move New York to 100 percent renewable energy by 2050. The bill’s labor and justice measures have garnered it wide grassroots support. And increasingly, the attention of lawmakers.

On Thursday, as part of New York Senate’s first-ever hearing on climate change, testimonies were heard on behalf of the bill. The legislation would make its goals across energy, transportation, and buildings legally enforceable — a contract with the environment.

It’s not the first time the CCPA has come close to becoming law: Last April, it passed in the Assembly for the third time. But the Senate’s leaders didn’t allow it to come to the floor for a vote. Now that Democrats control the Senate, the passage of the bill — or a similarly ambitious climate bill — is looking more likely.

“The CCPA is the main vehicle through which we will address climate change and these hearings will go a long way toward ensuring that all stakeholders will have input in the legislative process,” Senate Majority Leader Andrea Stewart-Cousins said in a statement.

Along with mandated energy goals, the CCPA would require that state agencies consider not only climate but also equity in their decisions. It would require fair labor standards for jobs created in renewable energy and would invest 40 percent of the state’s energy funds in communities likely to be hardest hit by climate change.

In her testimony, Annel Hernandez of the New York City Environmental Justice Alliance highlighted how the CCPA could help ameliorate the already unequal threat of climate change. “The confluence of extreme heat, lack of access to energy efficient buildings, and an aging grid with an increased likelihood of blackout is a quiet threat facing low-income people, people of color, and the elderly,” Hernandez said.

The bill was also held up as something that would mitigate a public health crisis. “As nurses on the front line of patient care, we see firsthand every day the destruction that climate change and climate justice issues have on the health of our patients,” Nella Pineda-Marcon, a nurse and climate activist, said in her testimony. She noted the chronic asthma she has witnessed in New York’s poorest communities.

Heidi Garrett-Peltier, an economist at the University of Massachusetts, testified in support of the bill, which she estimated would lead to 200,000 new jobs statewide over a decade thanks to clean energy growth. She estimates that it would take an investment of $8.7 billion per year to hit the renewable targets.

When asked by Senator Kaminsky if the bill is “practical and doable,” Garrett-Peltier said it is “absolutely a manageable level of investment.” Ultimately, she said, it comes down to “political will.”