Between dropping off his daughter at kindergarten and teaching classes at New York City’s Hunter College, Monxo Lopez ducked into his office and opened up his go-to Reddit thread, Solar/DIY. He scanned the latest posts, mostly made by survivalists and doomsday preppers.

Lopez, however, was neither of these. A Bronx-based political scientist, cartographer, and musician, he had no engineering background and little in common with his fellow DIY solar Redditors. Still, he needed their expertise.

“[It] was really ironic for me that these people that were all Trump supporters, these super conservative folks [who] don’t want to be touched by the federal government — these are the people that have reduced the technology to a level that is really easy to understand,” Lopez said.

One thing Lopez and his forum mates could agree on: Power is power. And in the wake of Hurricane Maria last fall, Lopez’s home island of Puerto Rico was in dangerously short supply. So he continued scanning the forums, taking notes, and ignoring the occasional Trumpisms and Confederate flag profile pictures.

He was a man on a mission: to make solar power accessible to pretty much anyone, starting by bringing home solar-powered generators to communities in Puerto Rico.

Lopez left Puerto Rico for Quebec when he was 23. He moved to New York City almost 20 years ago. He still remembers blackouts on the island when he was a kid during the ’70s and ’80s. He and his sister sometimes finished their homework under gas lights. Those memories came flooding back in September 2017, when Hurricane Maria plunged the territory into the second-largest blackout ever recorded, leaving some without power for nearly a year. 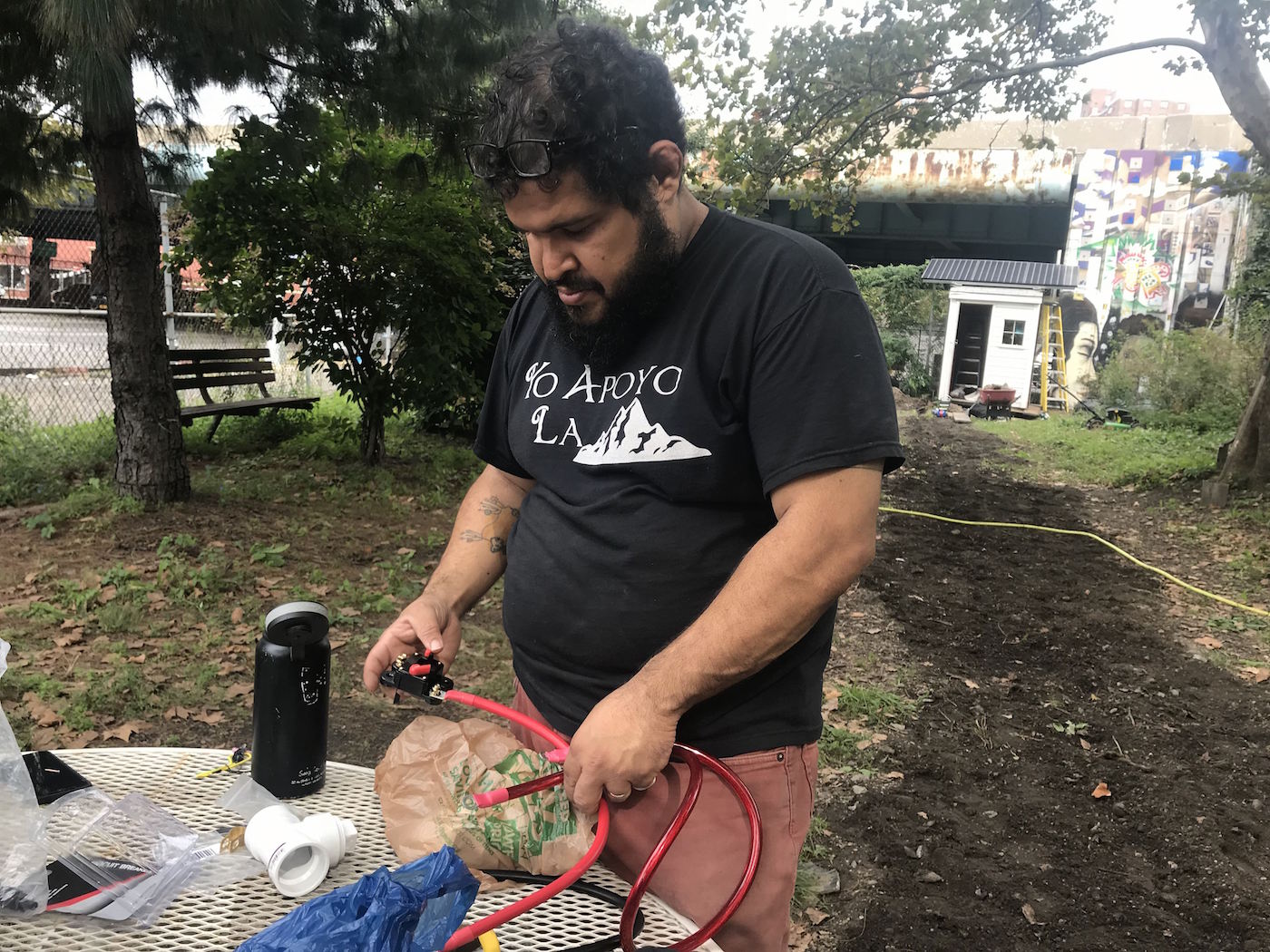 Shortly after the storm made landfall, Lopez got a call from his sister. He had lost contact with her for two days, and she had been having asthma attacks. “It was because of the fumes created by the gas and diesel generators,” he told Grist.

More than a month after Maria, the Licensed Electricians Association estimated there were around 100,000 generators — mostly gas and diesel-powered — operating on the island. Several people in Florida and Puerto Rico died from carbon monoxide poisoning produced by home generators after Hurricanes Irma and Maria knocked out their power.

Lopez’s sister knew that he had recently looked into solar power for his own home in the Bronx. “That’s why she told me, we need you to research this ASAP — to see if we can find something better than the generators,” he said.

Lopez quickly reached out to companies he had spoken to about installing solar panels in his own home, but he found that they weren’t much help. “Private companies were not interested in helping people for free. It was all about positioning themselves, making a sale, becoming a middleman,” Lopez explained. “That really hit me in the gut.”

At the same time, he saw an influx of solar companies taking an interest in providing a renewable alternative to Puerto Rico’s ailing power grid. It bothered him that anyone could set out to make a profit from the island’s dire energy needs. That’s when he set out to design his own power system — with the aim of sharing the technology with his fellow Puerto Ricans.

“Part of my process was precisely about demystifying,” Lopez said. “Making it clear how the solar thing works.”

Sure, he wasn’t exactly sure how to begin. But that had never stopped him before.

I met Lopez on a recent Sunday afternoon as he and some friends were finishing installing a 1,000-watt solar generator in a small park in his South Bronx neighborhood of Mott Haven. He seemed eager to share his time and knowledge but still didn’t stop working to chat, enlisting my help in threading a couple of wires into a shed for the solar panels to sit on.

Lopez is a fixture in this neighborhood. He is one of the most vocal residents pushing back against local gentrification, helping to found a community land trust and a coalition of stakeholders working to protect the future of the South Bronx. In order to organize his neighbors, he explained, they need places to meet — and powering the parks makes it easier for people to gather past sundown. 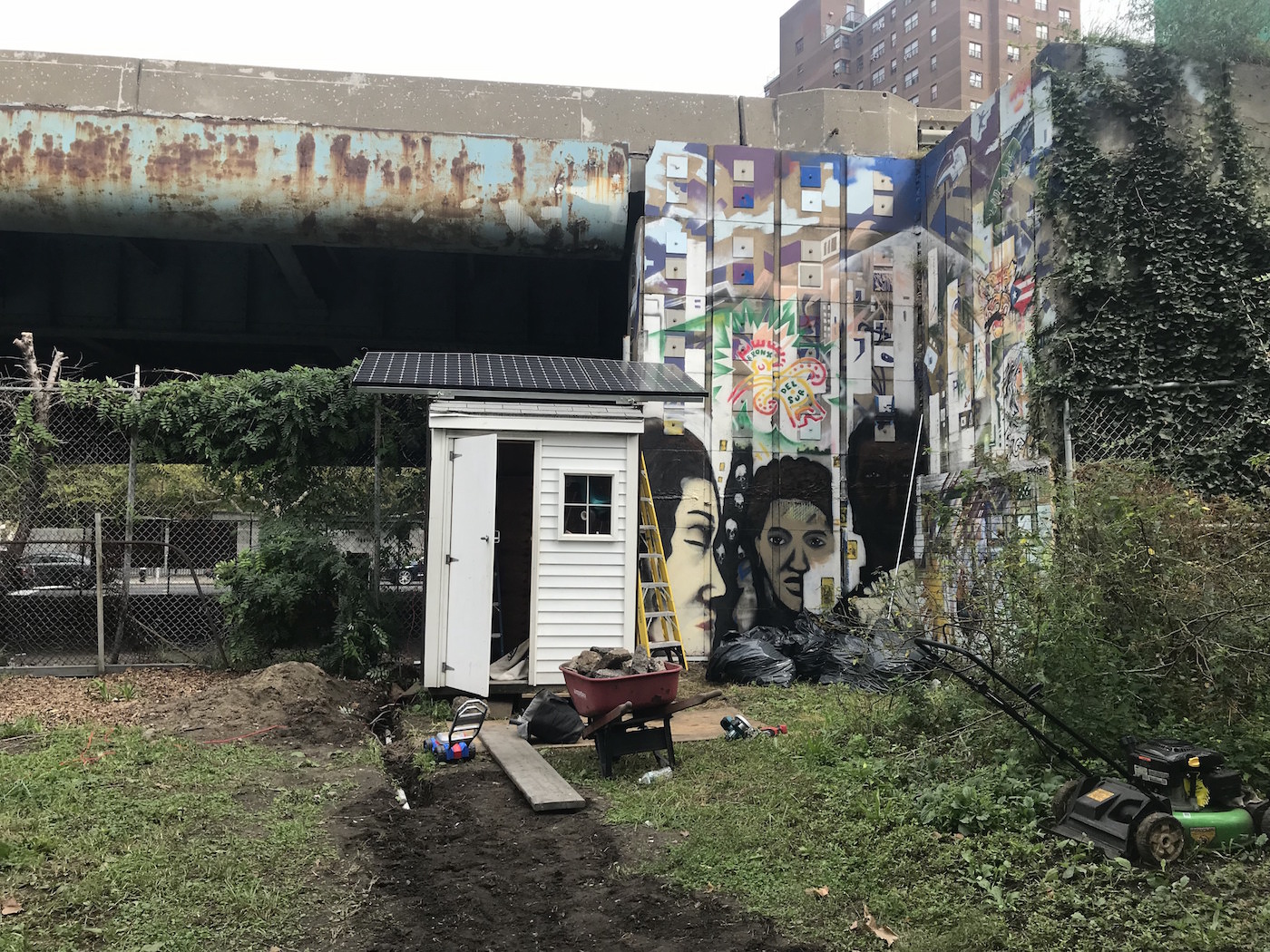 Monxo installed DIY solar panels in a park near his home in the Bronx’s Mott Haven neighborhood. Grist / Justine Calma

While technically an academic, Lopez considers himself to be a public intellectual. Academics, he said, appear on panels to pontificate. He thinks of himself as someone who takes knowledge out of the classroom and onto the streets — anywhere really — to reach a larger audience.

When I asked him about Hurricane Maria, he grew thoughtful. Lopez called the hurricane a “manmade disaster,” not only because of the way climate change contributes to the ferocity and frequency of super storms but also because of the economic and political conditions that made Puerto Rico so vulnerable.

U.S. colonization has made the territory largely dependent on the mainland for everything from food to energy, Lopez said. “Given the state of the energy grid in PR and our over-dependence on fossil fuels, how do we think about all this renewable stuff in ways that lead towards genuine energy independence?”

Lopez wanted a solution that would not only help turn the lights back on in case of another blackout — but could also help Puerto Ricans have more control over how they power their homes.

And it only took him eight months to do it.

In order to come up with ideas for his solar prototype, Lopez first hit up his network. An electrician friend who is also an activist loaned him books like the Solar Electricity Handbook and Photovoltaic Design for Dummies. A friend of a friend who lived in Puerto Rico, but couldn’t return to the island because of the hurricane, was testing solar components in China and shared his research. An empathetic Latino-owned business offered heavily discounted lithium batteries to Monxo. An old friend in Canada who had built solar panels for boats and houses was also on call and helped Lopez figure out how to put the pieces all together.

Much of the planning took place at Lower Manhattan’s Loisaida Center, which is directed by Lopez’s wife, Libertad Guerra. The organization supports arts and grassroots initiatives to empower Latino communities in New York and is an affiliate of the largest Hispanic-based, nonprofit community development organization in the state, Acacia Network. Acacia provided Lopez with seed money for his project.

Within a month of Maria making landfall in Puerto Rico, Lopez had a prototype of a solar array on paper. He ran it by a few engineers, then started to build. In November 2017, he and a group of volunteers were constructing and testing the prototype both at Loisaida and at a nearby park.

“We looked like mad people because we brought an industrial fan, all of our computers, one of the refrigerators here from Loisaida, and we basically had an office at the park,” Lopez recalls. 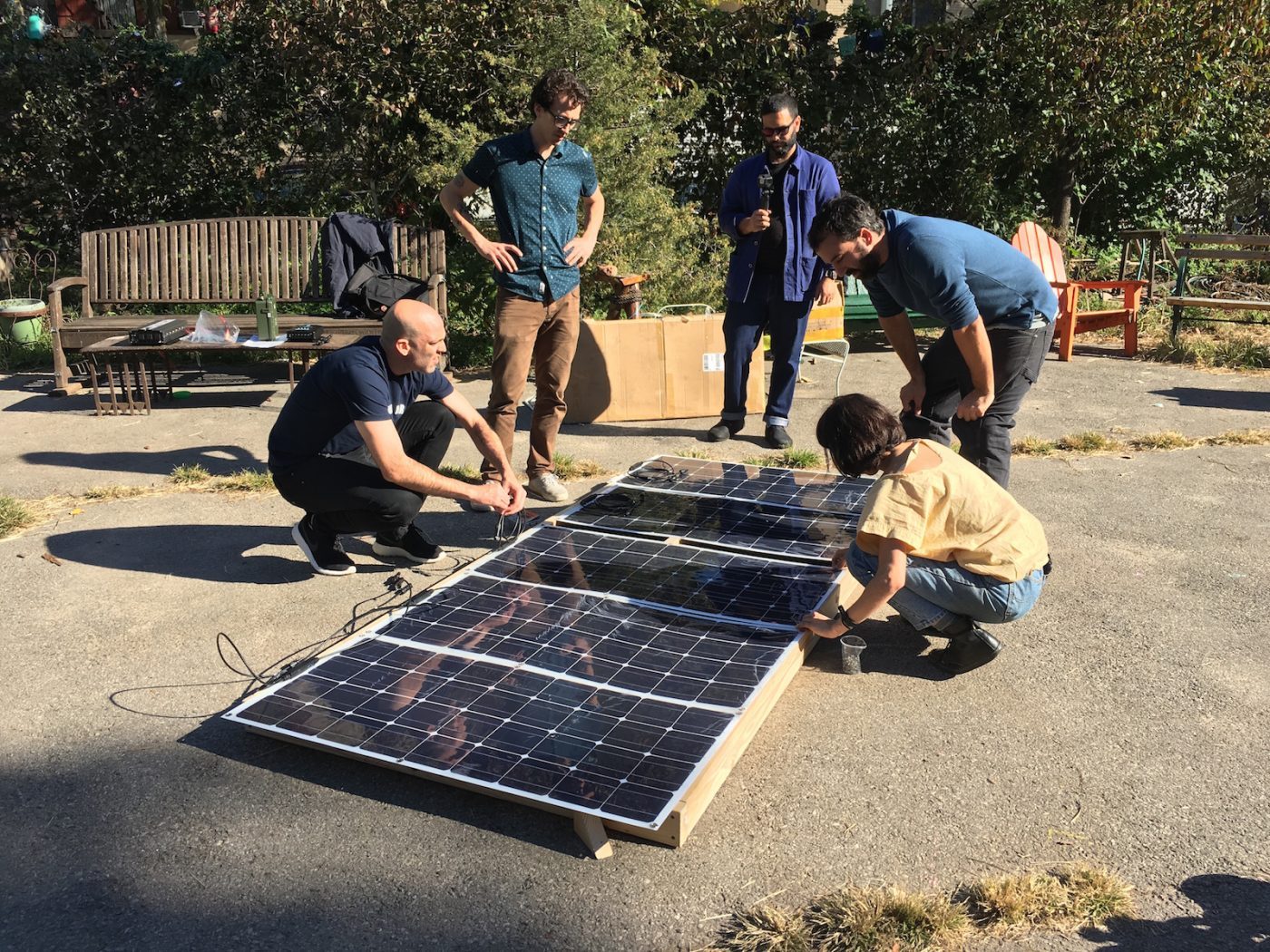 All in all, the project cost roughly $2,800 to build and ship to Puerto Rico — a drop in the bucket compared to the $20,000 it can cost to set up solar panels on a home. (Part of the difference in cost is because Lopez’s prototype doesn’t connect to the power grid.)

In August, Lopez traveled to Puerto Rico to finish installing the system at La Casa de Los Contrafuertes, a contemporary arts center in Old San Juan. Lopez thought it would be an easily accessible spot for people to access solar-generated power in a blackout — and for them to see and learn about the energy source and the role it could play in the island’s recovery.

Aside from its exhibits, La Casa also hosts visiting artists and scholars who can stay in a small apartment at the center. It was important to Lopez that his invention support artists, whom he credits with helping him throughout his endeavor.

Lopez told Grist that the arts community played a major part in disaster response. “Most of the artists I know of in Puerto Rico, they do some kind of socially responsible art,” he explained. “It might be surprising to other people — not to me — that many of the people that were especially well situated to help in the relief were artists. Because a lot of these artists have been involved in the community for a long, long time. They knew community leaders. They knew the most pressing needs.”

Charles Juhasz-Alvarado is one of the artists who co-leads the center. He said he has visceral memories of what it was like to live and work in a city running on generators post-Maria. “The noise was unreal, the smell, the pollution — it kept reminding you, you were in crisis,” he recalled.  In contrast, he explained, “the solar power is so peaceful.”

Lopez hopes to build up to 100 more solar generators that he can provide for free to community spaces across the island.

Putting solar energy in the hands of the people is a powerful tool, he said. And with some strong research and community support, Lopez doesn’t think access to solar needs to be out of reach for anyone.

“It isn’t simple,” he said. “But it isn’t really rocket science.”

Climate change could double the cost of your beer