One year ago Friday, Yamil Anglada recalls fear setting in as she lost contact with family members who were riding out Hurricane Maria. The office manager at a women’s cooperative in Brooklyn had moved from Puerto Rico to the mainland U.S. more than twenty years ago. And as the storm passed through her native island, she struggled to concentrate at work between making unsuccessful calls and scanning social media for updates that never came.

Today, her family is safe. But on the anniversary of the storm, she said, “I didn’t want to be alone.”

Like hundreds of other New Yorkers, Anglada made her way Thursday night to one of several gatherings planned to remember the lives lost and continue a call for a just recovery on the island. Although she said it was important for the community to be together for the occasion, she added, “I feel like this is just a date because the crisis is still ongoing.”

Anglada headed to Manhattan’s Union Square for an event organized by a community-led initiative called #OurPowerPRnyc, which was created to call out injustices in the U.S. government’s response to Maria. Among other demands, it argues for full relief for the territory’s “catastrophic” debt burden and rejecting the Puerto Rico Oversight, Management, and Economic Stability Act (PROMESA). The campaign says PROMESA, which established a federal oversight board for the territory, has hampered recovery efforts and is just one example of U.S. colonial control over Puerto Rico. 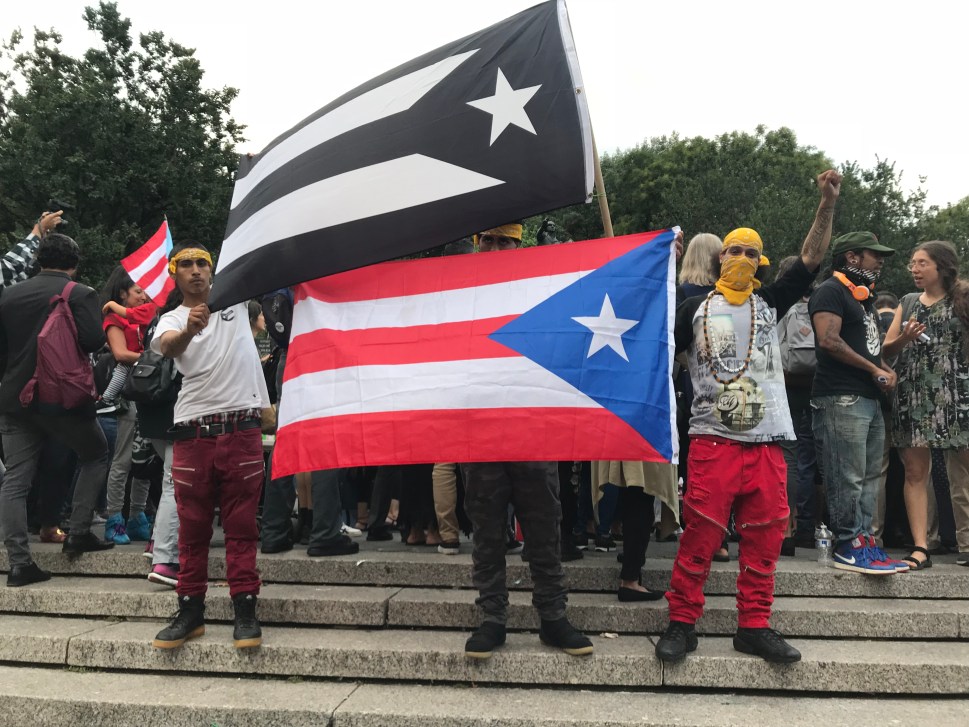 At rally in Union Square to commemorate the one-year anniversary of Hurricane Maria, speakers and attendants called for Puerto Rico to become an independent nation. Justine Calma

Again and again, speakers at the event called for for the island’s people to be able to chart their own future — and escape the federal government’s grip.

Elizabeth Yeampierre, executive director of the Latino community-based organization in Brooklyn, UPROSE, paid respect to a resistance she says is building within the island. She called its members “the people who are making sure that Puerto Rico is there 50 years from now, 100 years from now, and that we are an independent, sovereign nation.”

New York congressional candidate Alexandria Ocasio-Cortez took to the mic later in the program, calling for a transition to renewable energy that leaves no resident behind, a Marshall Plan-type effort to help Puerto Rico recover economically, and for “self-determination of the island.” In response, a voice in the audience called out, “We need independence! Say it!”

The demands for sovereignty resonated with Anglada, as well. “It’s independence for Puerto Rico,” she said. “It’s the only answer at this point.”

Hurricane Maria evacuees who found refuge in New York City and families of some of the storm’s victims gathered with interfaith clergy, community organizers, and local politicians for a bilingual memorial service — organized by the Power 4 Puerto Rico coalition. They came to bare witness to stories of shared grief and hope as part of a national week of action aimed at a just and transparent rebuilding effort that the coalition called “Boricuas Remember.”

Among the attendees was Bethzaida Toro, a 49-year-old licensed nurse from Cabo Rojo in southwestern Puerto Rico. She left the island for New York City last November with her three-year-old grandson. “I wanted to raise him in the paradise I was raised in,” she told Grist. “Unfortunately, that did not happen for him.”

Hurricane Maria’s siege on the island shook Toro’s faith. “When you survive a hurricane and then you realize that thousands of others didn’t — I doubted God.” she opined, adding that she lost her 72-year-old uncle to the storm. “But ultimately I kept praying. I kept walking on Faith Street.”

Nearly 3,000 flickering electric candles crowded St. Bartholomew’s ornate altar, each one representing a life lost to the tropical tyrant. Speakers pointed to these deaths as the result of gross negligence by the U.S. government, as well as the consequences of discriminatory treatment and policies. 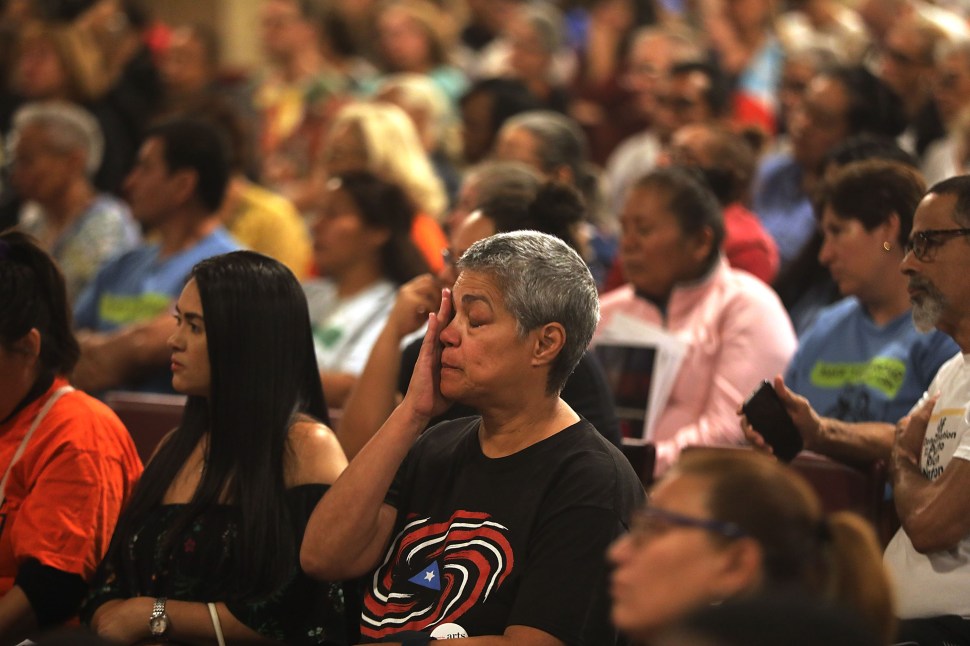 People attend a service at St. Bartholomew’s Church for the anniversary of Hurricane Maria which cut through Puerto Rico exactly one year ago Thursday. Spencer Platt / Getty Images

Several evacuees spoke at the ceremony. “Life for the past year has simply been one fight after another,” said Carlos Matos, who is now a physics student at the City University of New York. “Today, I can begin the process of healing.”

Speakers urged those gathered to remember the lives cut short as they mobilized to act and support Puerto Rico. “Today we mourn, but tomorrow we vote.” said former New York City Council Speaker Melissa Mark-Viverito, who is now campaign director of the Power 4 Puerto Rico coalition.

After taking time to honor Maria’s victims, attendees made sure those in power wouldn’t forget what the Puerto Rican people went through. And so, sign-wielding churchgoers took to the streets for a march to Trump Tower, holding hundreds of votive candles. They called for members of the U.S. Congress to meet the needs of Hurricane Maria survivors and their families. They also beseeched President Trump to apologize for his blatant neglect of the island and his continued refusal to acknowledge the extraordinary death toll, for which, they said, he is partly, responsible.