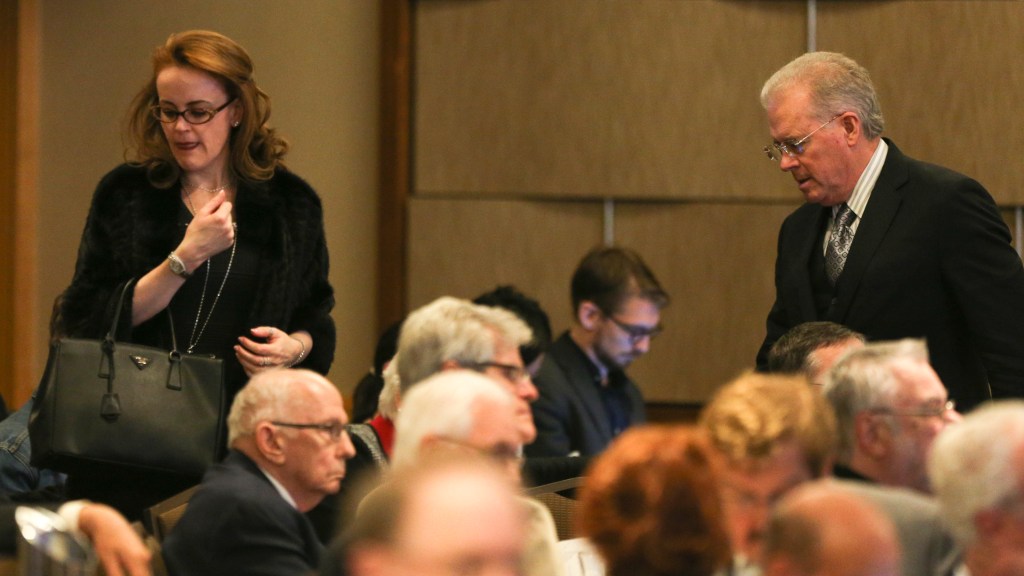 Billionaires Robert Mercer and his daughter Rebekah attend the 12th International Conference on Climate Change hosted by The Heartland Institute in 2017. Oliver Contreras / For The Washington Post via Getty Images
Climate Desk

The GOP megadonor family that gave more than $15 million to President Donald Trump’s 2016 campaign maintained its position as a key funder of climate change denial in 2017, dishing out nearly $5 million to nonprofits and think tanks that peddle misinformation about the global crisis, according to their latest tax records.

The continued largesse by the deep-pocketed but secretive Mercer family included a $170,000 donation to the CO2 Coalition, a right-wing think tank that argues Earth benefits from humans pumping carbon dioxide into the atmosphere. William Happer, a retired Princeton physics professor whom Trump recently tapped to lead an ad hoc panel to conduct “adversarial scientific peer review” of near-universally accepted climate science, co-founded the group in 2015.

Hedge fund tycoon Robert Mercer funds the Mercer Family Foundation, and his daughter, Rebekah Mercer, directs it. The foundation’s six-figure gift to the CO2 Coalition accounts for a quarter of the $662,203 the coalition raised in 2017. The think tank received its first donation of $150,000 from the Mercers in 2016.

The CO2 Coalition was established out of the defunct George C. Marshall Institute, another conservative think tank that cast doubt on climate science before folding in 2015. Happer, a seasoned climate change denier, left the CO2 Coalition last September to serve as Trump’s deputy assistant for emerging technologies on the National Security Council.

Happer has called climate science a “cult,” claimed Earth is in the midst of a “CO2 famine,” and said the “demonization of carbon dioxide is just like the demonization of the poor Jews under Hitler.”

The Mercers divvied out a total $15,222,302 to 37 nonprofits in 2017, according to the foundation’s most recently available 990 tax form, which researchers at the Climate Investigations Center shared with HuffPost. That’s down from the approximately $19 million they gave to 44 nonprofits one year earlier.

Roughly one-third of all the foundation’s 2017 contributions — just shy of $5 million — went to nonprofits that oppose federal regulations targeting greenhouse gas emissions, challenge the scientific consensus that human-caused climate change is an immediate crisis, or promote or funnel cash to denial proponents.

“It appears that climate denial is a priority of the Mercer family,” Kert Davies, director of the Climate Investigations Center, told HuffPost.

The foundation could not be reached for comment Tuesday. And the CO2 Coalition did not respond to HuffPost’s request for comment.

For the second year in a row, the Mercers gave $800,000 to the Heartland Institute, an Illinois-based libertarian think tank that has gained influence during Trump’s tenure and applauded the president’s first year in office as “a great year for climate realists.” The Mercers have given Heartland a total of $6.7 million since 2008.

The foundation also upped its contribution to the Oregon Institute of Science and Medicine, a group founded by Art Robinson, a biochemist floated as a candidate for Trump’s national science adviser and whom FiveThirtyEight dubbed “the grandfather of alt-science.” Robinson used the organization to circulate an infamous and bogus petition that claimed 30,000 scientists had declared there is no evidence of anthropogenic climate change. The Mercers gave the group $500,000 in 2017, up from $200,000 the previous two years. The foundation has given the group nearly $2.2 million since 2005.

The Mercers in 2017 also made a first-time donation of $200,000 to the Energy & Environment Legal Institute (formerly the American Tradition Institute), a climate denial group that has received funding from coal companies and repeatedly filed lawsuits in an effort to obtain the personal emails of climate scientists.

Foundation money also went to the Media Research Center ($2 million), the Manhattan Institute for Policy Research ($450,000), and the Cato Institute ($300,000). Donors Trust, a conservative group that has funneled millions of dollars to climate denier groups like Heritage and the American Legislative Exchange Council, received $500,000, down from $2.5 million in 2016. Mother Jones called Donors Trust “the dark-money ATM of the right.”

The White House’s plan to convene a group of fringe researchers for a new climate panel is the latest in an ongoing effort to discredit and downplay decades of all-but-irrefutable climate science — a torch that has long been carried by Mercer- and fossil fuel-funded think tanks.

In May 2017, the CO2 Foundation, the Heartland Institute, and dozens of other climate denial groups signed onto a letter calling on Trump to fully withdraw from the historic 2015 Paris climate accord. Doing so, they told Trump, was “an integral part of your energy agenda.” Less than a month later, Trump announced plans to do just that.

In addition to Happer, those under consideration for the White House panel include retired MIT professor Richard Lindzen. Last year, Lindzen spearheaded a letter signed by more than 300 climate skeptics urging Trump to pull the U.S. out of the United Nations’ climate change agency.

Lindzen is both on CO2 Coalition’s board of directors and a distinguished senior fellow at the Cato Institute, a libertarian think tank based in Washington, D.C., that is funded by the fossil-fuel billionaire Koch brothers.

It appears the National Climate Assessment, a congressionally mandated report that scientists from 13 federal agencies released in November, will be a prime target of the new committee, according to reporting by The Washington Post and E&E News. That dire report, which the Trump administration signed off on but the president said he doesn’t believe, concluded that planetary warming “could increase by 9 degrees F (5 degrees C) or more by the end of this century” without dramatic emission reductions.

In a speech on the Senate floor Tuesday, Minority Leader Chuck Schumer vowed to introduce legislation to defund Trump’s “fake climate panel,” should the president move forward with it. As an “ad hoc group,” the committee would not be required to meet in public or be subject to public records requests, according to The Washington Post.