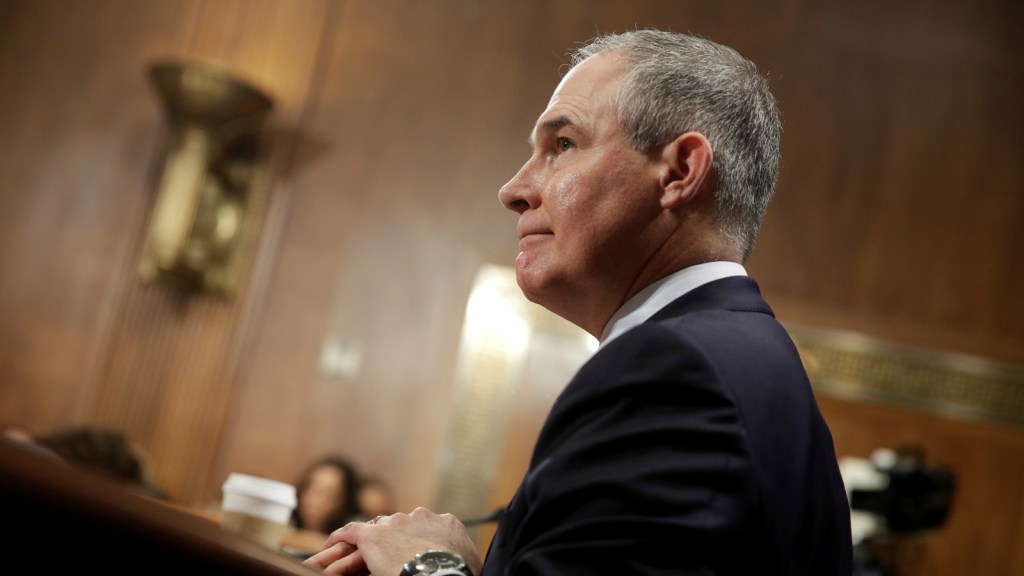 It became clear Wednesday that far-reaching car pollution rules enforced by California and a handful of other states could be jeopardized if EPA nominee Scott Pruitt is confirmed by the Senate.

After repeatedly suing the EPA as Oklahoma’s attorney general over what he has characterized as federal overreach, President-elect Trump’s pick to lead the agency said during his Senate hearing that he plans to review whether California will be allowed to continue operating its own pollution rules affecting vehicles.

California has long set the standard nationwide on environmental regulations, and it has been enforcing pollution rules on automakers for more than 50 years that have helped to reduce smog, slow global warming, and improve mileage.

California’s rules for 2017 to 2025 require automakers to sell minimum numbers of electric vehicles, which are typically less polluting than traditional alternatives and can help slow global warming. Motorists can recharge electric vehicles using solar and wind power, which are becoming more common and affordable.

Pruitt said he would review a federal waiver provided to California that allows it to operate clean car standards that are more stringent than federal rules. Pruitt said “we shouldn’t prejudge the outcome” of his review.

Federal standards are silent on electric vehicles. Under a longstanding provision of the Clean Air Act, Massachusetts and some other states are allowed to enforce California’s vehicle regulations instead of federal ones.

Pruitt’s statement triggered alarm among climate experts and activists who already fear that the Trump administration and Republicans in Congress will go further than merely ending federal leadership on climate action and preemptively prevent cities and states from taking action on their own.

“The current federal regulations, while great, are not going to be aggressive enough,” said Andrew Linhardt, a car pollution expert with the nonprofit Sierra Club. Revoking California’s waiver “would really be a setback for the fight for a clean environment and for mitigating the worst of climate change.”

The plan to review California’s waiver “is hitting me real hard,” said R.L. Miller, an environmental activist in California. She is president of the Climate Hawks Vote Super PAC. “For some guy from Oklahoma to be telling us that suddenly states’ rights don’t count, because he’s pushing an agenda, was just appalling.”

During George W. Bush’s presidency, the EPA refused to provide California with the waiver it needs to impose clean car rules that go further than federal standards. The waiver was eventually provided by President Obama’s EPA, despite opposition from automakers and the oil industry.

Shortly after Trump won the election, the Alliance of Automobile Manufacturers sent him a letter urging him to “harmonize” federal and Californian pollution rules.

Alliance spokesperson Wade Newton on Jan. 18 declined to discuss Pruitt’s comments or its campaign against California’s clean car standards, saying “the first step is us talking with the incoming administration” after Trump is sworn in on Friday.

Also after Trump’s election win, California hired Eric H. Holder Jr., Obama’s attorney general, to help it defend its state rights from what it fears will be attacks by the incoming federal government. It’s expected to take any fights over its EPA waiver to court.

“I think the EPA needs to provide more assistance to the states and work in a partnership and be cooperative,” Pruitt said after he was asked by Sen. John Boozman, a Republican from Arkansas, how he would “restore cooperative federalism” at the agency. “Regional administrators we have across the country need to be seen as partners — and not adversaries.”

Among other things, Pruitt’s lawsuits have targeted EPA regulations limiting mercury and greenhouse gas pollution from power plants — health and environmental issues that the Supreme Court has ruled the EPA is required to regulate.

“What we’ve heard all day is how much you support states’ rights when it comes to these issues,” Markey said. “But now, when it comes to the rights of California, of Massachusetts, and other states to be able to reduce carbon pollution, you’re saying you’re going to review that.”