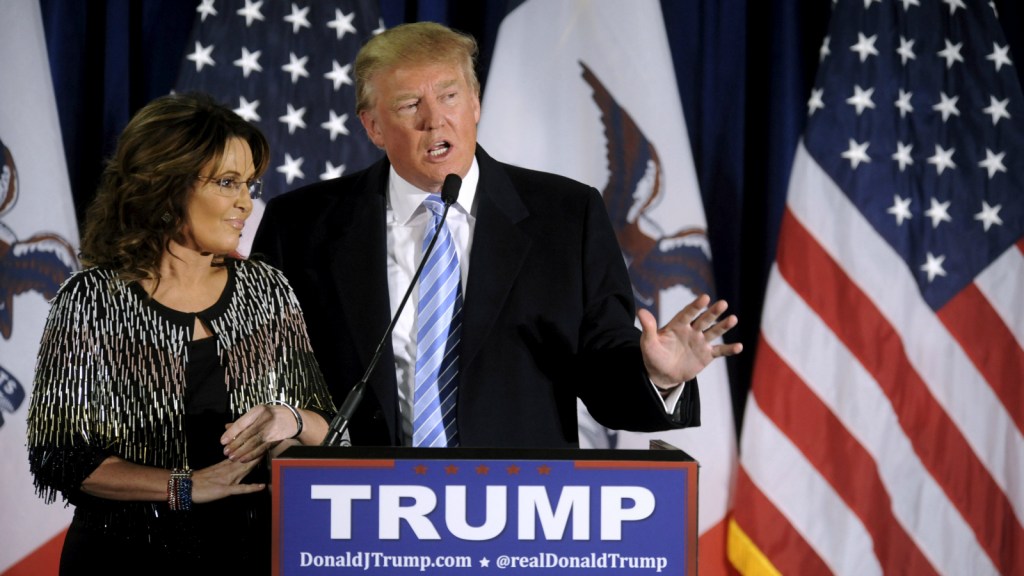 In the immortal words of Charlie Brown: Good grief.

“Are you ready to make America great again?” Palin shouted to the rabidly white audience, sucking whatever little meaning was left from the word “great.”

“Are you ready to stump for Trump?” she continued. “I’m here to support the next president of the United States: Donald Trump.”

Hopefully Palin’s political predictions are as on point as her knowledge of geography, but one must wonder if this is only the beginning of Trump and Palin joining forces. In September, Trump said he’d welcome the one-term Alaska governor in his cabinet, and Palin responded that she’d like to head the Department of Energy. “Energy is my baby,” Palin told CNN at the time. “Oil and gas and minerals, those things that God has dumped on this part of the Earth for mankind’s use instead of us relying on unfriendly foreign nations.” Never mind that the Energy Department doesn’t have anything to do with drilling and mining because that’s the province of the Interior Department.

Palin returned to her familiar fossil-fuel-promoting gobbledygook at the Trump event on Tuesday, trotting out the “drill, baby, drill” mantra again. “No, we’re not going to chill,” said the mother of the year after reeling off a list of grievances. “In fact, it’s time to drill, baby, drill down.”

The Big D himself seemed unfazed by this embarrassing endorsement. “I am greatly honored to receive Sarah’s endorsement,” Trump said in a statement before the Iowa event. “She is a friend, and a high-quality person whom I have great respect for.”

You would, Donald. You would.

Here’s a video Mother Jones unearthed of the two best friends in conversation last year, but TRIGGER WARNING: Donald Trump, Sarah Palin, the death of all that is right and good in the world.