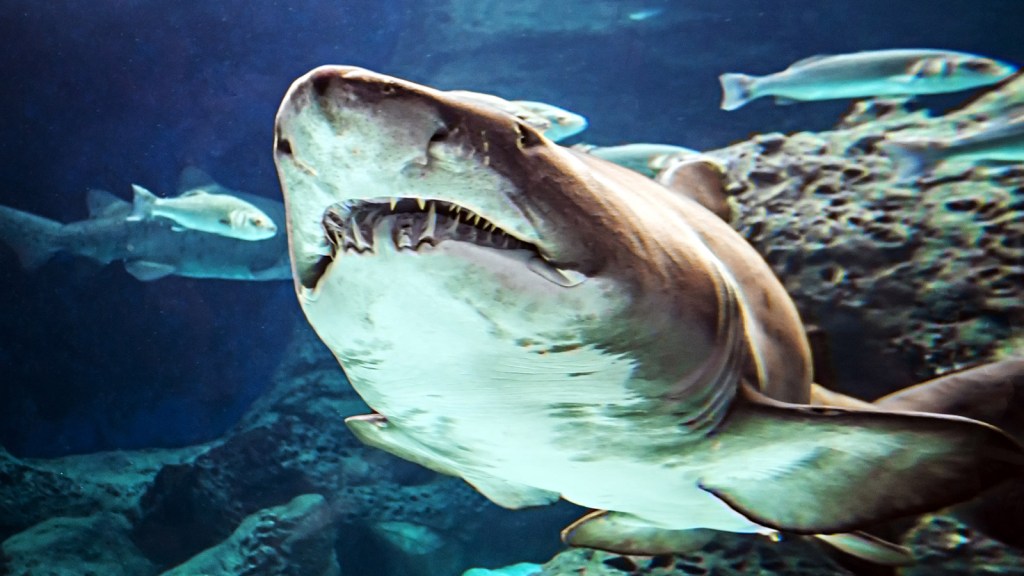 You love watching sharks — who doesn’t? But it’s hard to ignore the fact that the Discovery Channel has apparently run out of science, used up all of its hyperbole, and just started making stuff up.

But you still need your shark fix, right? Well, we at Grist are here to help. We’ve pulled together six of the best live shark cams from aquariums across the U.S. of A. It’s The People’s Shark Week!

The National Aquarium’s new Blacktip Reef exhibit includes a massive, realistically modeled pacific reef with an enormous 500-pound green sea turtle named Calypso, tassled wobegong sharks and, anticlimactically, blacktip reef sharks. Blacktip reef sharks aren’t that big, but they are one of the more shark-shaped sharks, making them pretty fun to watch and pretty scary to swim with. Though currently common in the Pacific, acidification and bleaching threatens their reefy homes.

Frightening Factoid: Blacktip reef sharks are capable of parthenogenesis and I should probably explain what that is. In 2008, DNA tests showed that a female blacktip had impregnated herself. Probably wise, as, lacking internet access, most sharks are woefully unprepared for modern online dating.

OK, we’re double dipping at the National Aquarium, but this little exhibit is worth it. The Pacific Lagoon features gorgeous live anemones, freaky yellow sea cucumbers, and huge-headed wolf eels, along with both horn sharks and leopard sharks. While neither species is actively hunted, both are frequently guilty of being in the wrong place at the wrong time and are threatened by bycatch from other fisheries.

Frightening Factoid: Should you see a delicious-looking horn shark in the wild, fight the urge to eat it alive and whole. Each of its two dorsal fins packs a venomous spine. (Venomous Spine, also the name of my first metal album.) Venom is rare in sharks, which is good — they’re already scary enough.

Cal Academy’s shark lagoon actually features two cameras to go with its two species of sharks. The academy has the same blacktip reef sharks they’ve got in Baltimore, but throws in some bamboo sharks. Bamboo sharks may be tiny but… well, there really is no but. In rare instances, they reach 3 feet in length, but are generally much smaller, making them popular for home aquariums, a trate which is a serious threat to their wild populations.

Frightening Factoid: Bamboo sharks, which are actually made out of shark, not bamboo, have spiracles, gill-like openings behind their eyes that allow them to lie under the sand and breathe through the tops of their heads. They’re also pretty hardy and capable of living out of the water for up to 12 hours.

You can watch the action in the shark lagoon here.

4. The Aquarium of the Pacific: Shark Lagoon

Yes, the Aquarium of the Pacific in Long Beach, Cali., has a Shark Lagoon too. But this one swaps blacktip reef sharks for whitetip reef sharks AND throws in some zebra sharks. The stars, however, are undoubtedly the massive, toothy sand tiger sharks. The slow-moving sand tigers frequently reach lengths of over 10 feet and weights of up to 350 pounds, though unproven reports of much larger fish abound. The non-aggressive sharks are popular in aquariums partly due to their terrifying teeth, which give them a smile capable of terrifying British royalty. Sand tigers roam most of the world’s oceans but, due to over fishing and once popular, now illegal spearfishing, their numbers have dropped dramatically since the 1980s.

Frightening Factoid: Sand tigers may not be dangerous to swimmers, but they take sibling rivalry to horrifying new levels. Sand tigers were the first sharks documented engaging in intrauterine cannibalism. That’s right, unborn sand tigers eat their unfortunate brothers and sisters. This must lead to some awkward best-man toasts at shark weddings.

The Georgia Aquarium’s gihugic (A word coined, by me, exclusively to describe the Georgia aquarium’s insane 6.3 MILLION gallon tank. A tank so large it would take 6.3 MILLION 1 gallon milk jugs to fill) Ocean Voyager exhibit is home to four whale sharks, the largest fishes ever to swim the seas. This one is a must see. The gigantic fish could reach a length of 40 feet which is probably bigger than a school bus as all large animals seem to be measured against school buses. Though they have mouths 4 feet across, the gentle sharks eat mostly plankton and krill. (I should rephrase that last sentence. They aren’t terribly gentle if you are a plankton or a krill.)\Frightening Factoid: Whale sharks are believed to live as long as 150 years and the record for the most whale sharks to fit inside of a Volkswagen beetle is just one whale sharks.

Check out the scene in Georgia here.

Frightening Factoid: The Global Shark Tracker app has taught the world that great whites are in lots of places we never expected. They’re way out in the ocean. They’re right off your beach. Heck, there’s probably one in the backseat of your car.

Scary right? Well, maybe, but they didn’t just show up there. They’ve been there all along, you just never knew. And you know what? They left you the hell alone!

Maybe it’s time we do the same and give these poor fish a break. Stop freaking out, kick back, and enjoy some sharky action, no special effects required, from the comfort of your own couch.