So you want to revive rural America. Try wind turbines, not coal mines. 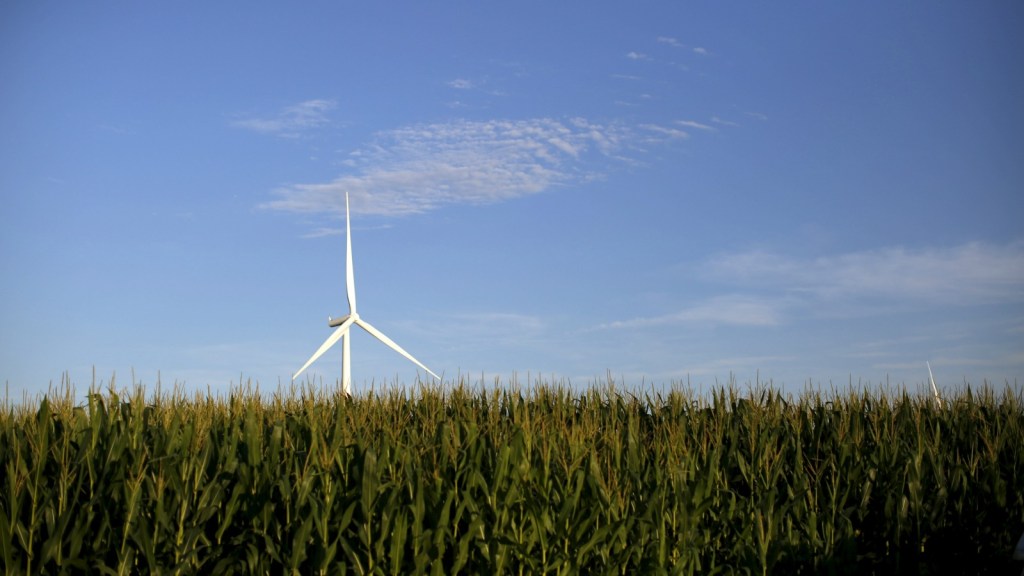 So you want to revive rural America. Try wind turbines, not coal mines.

For half a century, Tim Hemphill grew corn and soybeans on his 720-acre farm in northern Iowa. Then five years ago, as he readied his son to take over the business so he could retire, catastrophe struck: Local corn prices plummeted. “It was about the worst thing that ever happened to farmers,” he says. And it’s happening all over the country: Slumps in commodity prices, paired with rising costs of pesticides and seeds, have driven many small farms out of business, and, according to the Department of Agriculture, farmers’ earnings are projected to drop nearly 9 percent in 2017.

Luckily, the Hemphills had another source of income. Around the same time Hemphill retired, he connected with a company called Lost Lakes Wind Farm. He jumped at the chance to lease three acres of his property to Lost Lakes, and now two turbines yield Hemphill about $20,000 a year to supplement his Social Security checks. Hemphill’s son still farms around the structures, and the family barely notices them — except for an occasional whirring sound.

Wind farms have caught on throughout Iowa, not only bringing a much-needed boost to farmers, but also generating county tax revenue to fund school and road improvements and adding new jobs. Iowa now gets 36 percent of its electricity from wind, a higher percentage than any other state, even California. While coal is still Iowa’s main source of electricity, one of the state’s largest utilities, MidAmerican Energy, has set ambitious goals to invest in wind power. After the completion of its $3.6 billion Wind XI project — one of the biggest economic developments in the state’s history — the company says 89 percent of its customers’ energy will come from renewables.

In Iowa, landowners reap at least $10 million a year leasing their land to turbines. Nationwide, they may earn as much as $900 million a year by 2030, according to analyst Alex Morgan of Bloomberg New Energy Finance. “Farmers cannot farm anything legally on that small amount of land and get that kind of return,” says Chris Kunkle, a Western policy manager at industry advocacy group Wind on the Wires. Iowa’s Gov. Terry Branstad credits wind energy with drawing $12 billion worth of investments to his state. It also added 11 manufacturing facilities and thousands of jobs, including for wind turbine technicians, the country’s fastest-growing profession. In 2016, some 9,000 Iowans worked in the wind industry, about a fifth of the number operating farms. Both Facebook and Google have set up data centers in the Hawkeye State, taking advantage of how clean energy can help them meet their goals for renewables. And more than two-thirds of Iowa’s installed wind power is in poor communities: Kunkle says he’s visited small rural counties that get about a tenth of their total budget from wind farms.

Iowa isn’t the only state benefiting from the breeze. Wind farms — and the new jobs that come with them — have swept across the Midwest, where coal and traditional manufacturing gigs have vanished. (Despite what President Donald Trump will tell you, coal jobs started to disappear back in the 1980s, when the steel industry began to sink and utilities stopped building new coal-fired power plants.) In the “wind belt” between Texas and North Dakota, the price of wind energy is finally equal to and in some cases cheaper than that of fossil fuels. Thanks to investments in transmission lines, better computer controls, and more efficient turbines, the cost to U.S. consumers fell two-thirds in just six years, according to the American Wind Energy Association. A federal tax credit — which gives producers 2.3 cents per kilowatt-hour of electricity for 10 years — is set to expire at the end of 2019, but analysts with financial firm Lazard say that even without federal subsidies, the price of wind energy is finally on par with that of traditional energy sources.

Still, not all windy states have a turbine-friendly climate. In Wyoming, for example, coal-loving legislators passed a tax on wind energy in 2010 and are also considering penalizing utilities for including renewables in their portfolios. According to Michael Webber, deputy director of the University of Texas’ Energy Institute, the next few years will see a showdown between “rural Republicans who really want to get the economic boost [wind] offers to their district, versus Republican ideologues who don’t like renewables because they like fossil fuels” — and whose campaign contributions depend on protecting them.

So farmers — and voters — will have to fight for wind, which, according to the International Renewable Energy Agency, “offers the greatest potential for growth in U.S. renewable power generation.” In his energy plan, Trump speaks of reviving the country’s “hurting” coal industry and argues that “sound energy policy begins with the recognition that we have vast untapped domestic energy reserves right here in America.” We do — and those reserves could lead to hundreds of thousands of jobs in the coming years, and very few carbon emissions. And if Trump weren’t so fixated on the sputtering coal industry, he might actually see them.