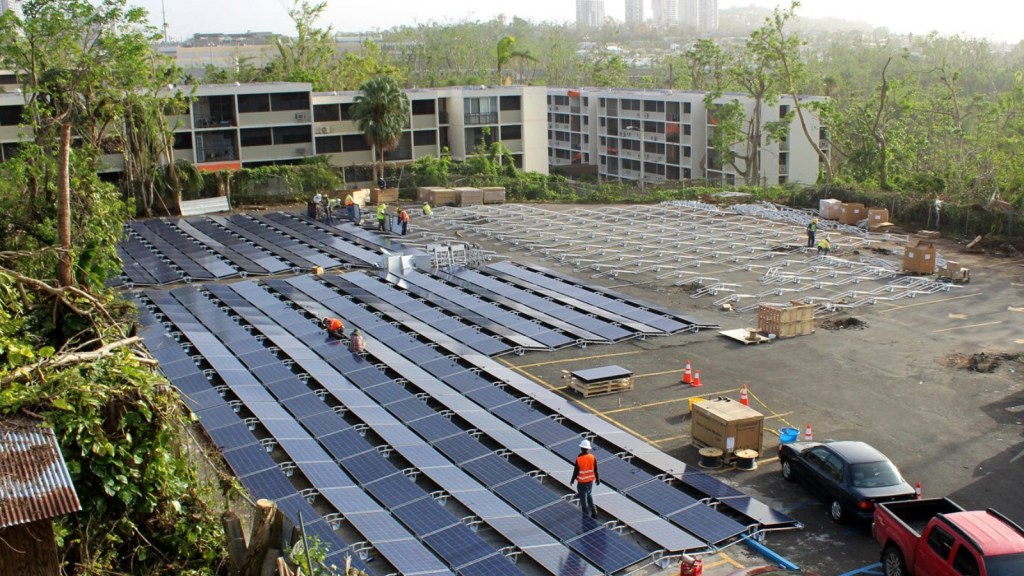 It was a transaction concocted on Twitter — and in a few short weeks, declared official: Tesla is helping to bring power back to Puerto Rico.

Early this month, Elon Musk touted his company’s work building solar-plus-battery systems for small islands like Kauai in Hawaii and Ta’u in American Samoa. He suggested a similar setup could work for Puerto Rico. The U.S. territory’s governor, Ricardo Rosselló, tweeted that he was game. Musk replied quickly: “Hopefully, Tesla can be helpful.”

After earlier reports of the company’s batteries arriving at San Juan’s port, Tesla announced today that it has started constructing its first microgrid installation, laying out a solar field and setting up its refrigerator-sized Powerpack batteries to supply electricity to a children’s hospital in the Puerto Rican capital.

Hospital del Niño is first of many solar+storage projects going live. Grateful to support the recovery of Puerto Rico with @ricardorossello pic.twitter.com/JfAu11UBYg

More than a month after Hurricane Maria destroyed swaths of the island’s electrical grid, 85 percent of Puerto Rico is still without power. Total grid repair costs are estimated at $5 billion — an especially steep price for a public utility already $9 billion in debt. The lack of power is especially dire for hospitals, where unreliable electricity may spoil medicines that require refrigeration and complicate crucial medical procedures. The results could be deadlier than the storm itself, but solar power could help head off further disaster.

The idea that solar could serve as a viable source of emergency relief is new. Sure, renewable technologies have proliferated and become more affordable, but there’s a tried-and-true response to natural disasters: Fall back on diesel generators and fuel until utilities have a chance to restore grid power.

This has largely been the pattern in post-Maria Puerto Rico. One hardware store told the New York Times it was selling up to 300 generators a day. FEMA claims it has installed more generators in Puerto Rico than in hurricane-ravaged parts of Texas and Florida combined. But generators are expensive, inefficient, and prone to failure. And burning diesel or gasoline in homes comes with health risks like carbon monoxide poisoning.

By contrast, a microgrid setup — that is, a combination of solar panels, battery storage, and electrical inverters that doesn’t require input from the main power grid — can potentially take immediate effect, providing reliable electricity with no pollution. And, once installed, these self-contained systems could help eliminate the rolling blackouts that were a problem for Puerto Rico’s major utility even before Maria.

Tesla is only the most prominent company to bypass the conventional avenues of rebuilding to install renewable power and batteries. Other companies and nonprofits have been marshalling resources to fill the void left by federal relief efforts. German renewable energy outfit Sonnen has pledged to build microgrids in priority areas, working with local partner Pura Energia to install donated batteries to power first aid and community centers. Another group, Resilient Power Puerto Rico, is distributing solar generators to remote communities, where they can serve as hubs for immediate necessities like charging phones and filtering water.

Marco Krapels, founder of the nonprofit Empowered by Light, traveled with a solar installation team to Puerto Rico in early October to deploy solar-plus-battery microgrid systems on fire stations. The nonprofit partnered with local firefighters to quickly cut through red tape paralyzing much of the disaster response.

“It takes only 48 hours to deploy once it arrives in the San Juan airport,” Krapels says of the standalone systems. “The firefighters, who have 18 flat-bed trucks, pulled up to our cargo plane; three hours later we were installing the system; and 48 hours later we’re done.”

The microgrid systems provide electricity and communications to the fire stations, as well as water purification technology that can provide up to 250 gallons of drinkable water a day — crucial on an island where 1 in 3 residents currently lack access to clean water.

There are 95 fire stations in Puerto Rico, Krapels says, and he estimates it will take just under $5 million for Empowered by Light to outfit them all. So far, the nonprofit has transformed two stations, one in the low-income Obrero neighborhood of San Juan and one in the town of Utuado, in the remote center of the island. After both installations, Krapels says, the local fire station was the only building with the lights on after dark — outlying and underserved communities are always among the last to receive emergency relief.

“There are parts of the island that are so destroyed that there is no grid,” Krapels says. “There is nothing to fix: The transformers are all burnt, the poles are gone, the wires are laying on the street.”

As much as 80 percent of the island’s high-power transmission lines were destroyed, Bloomberg reported, and even optimistic estimates of repair work have a majority of the island off the grid until late this year.

In the coming months, as communities and companies work to rebuild that infrastructure, there will be an opportunity to make the island more resilient. Companies like Tesla offer one path to less vulnerable electricity infrastructure. Meanwhile, organizations like Resilient Power Puerto Rico emphasize the importance of economic resilience, too. The New York-based founders want to put power in the hands of the island’s residents, modeled after similar efforts in the Rockaways post-Sandy. The nonprofit has ambitions to establish 100 solar towns, a robust green economy, and more electrical independence for all.

“If we’re going to rethink energy in Puerto Rico, let’s really empower people to deploy their own distributed renewable generation and storage,” Krapels says. “The sun is there every day, and it’s going to shine for the next 5 billion years.”