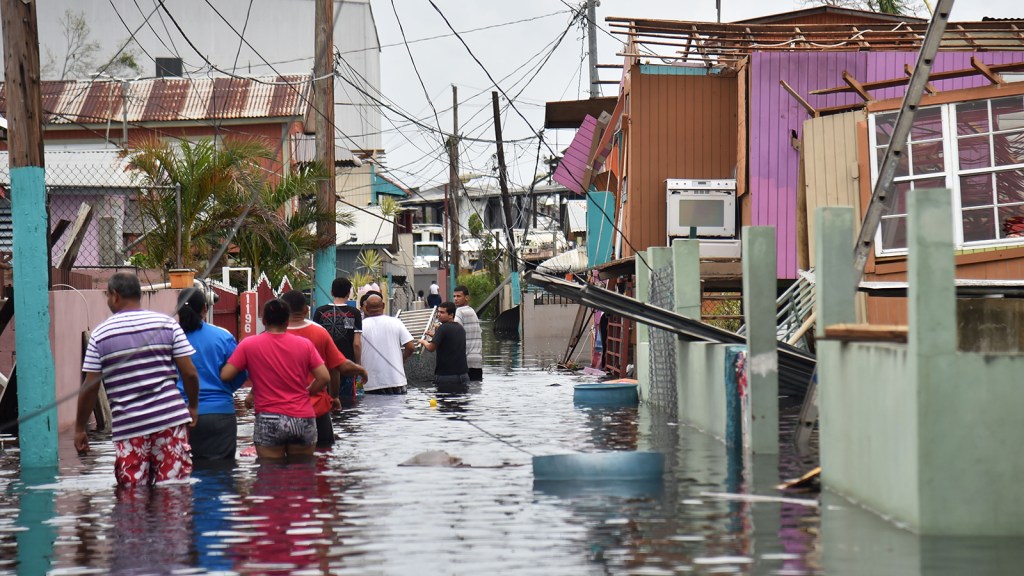 Puerto Rico is quickly sloping toward a Katrina-level catastrophe. A week after Hurricane Maria made landfall, the power is off nearly island-wide. Food and supplies critical for keeping 3.5 million people — a higher population than in 21 U.S. states — alive and well, are running out fast.

“There will be a humanitarian crisis,” Puerto Rico Governor Ricardo Rosselló said Tuesday morning on CNN in a plea for the federal government to send more help to the island. “There will be massive exodus to the United States.”

The U.S. territory evaded the worst that Hurricane Irma had to offer before absorbing a hit from Maria a week later. It would have been a crushing blow to any place where a Category 4 hurricane might have made landfall, but Puerto Rico was in a particularly precarious position for a number of reasons, including its status as an American commonwealth, its recent economic woes, and (you guessed it) climate change.

1. A distracted reality TV star in the White House

If President Trump’s Twitter feed actually reflects what’s on his mind, Puerto Rico wasn’t. At least not in the five days immediately after Hurricane Maria tore through the U.S. territory. Only two of more than 50 tweets he composed in that time mentioned the devastation.

What was on his mind? Coming up with belittling nicknames for North Korea’s nuclear-armed dictator and football players kneeling during the national anthem. Administration officials, including FEMA Director Brock Long — who received high marks on his response to Harvey — arrived in Puerto Rico on Monday. And while Speaker of the House Paul Ryan said Congress will push through new funding for Puerto Rico’s recovery, Trump hasn’t made the necessary request. There are signs it won’t come for a few more weeks.

Spoke to Puerto Rico's governor earlier tonight. He said the island's yet to receive all search & rescue & humanitarian aid its requested.

As celebrities, high-profile Democrats, and a bipartisan faction of Florida members of Congress has called for swifter action, the White House has defended its response thus far. “We’ve done unprecedented movement in terms of federal funding to provide for the people of Puerto Rico and others that have been impacted [by] these storms,” said Sarah Huckabee Sanders, the White House press secretary. “We’ll continue to do so.”

The president finally took to Twitter on Monday evening to talk Puerto Rico. He delivered a series of tweets noticeably short of empathy, saying that the island was already in a rough spot, pre-Maria, suffering from “broken infrastructure” and “massive debt.” He plans to make his first presidential visit to the stricken island himself next Tuesday — nearly two weeks after the storm hit.

What Trump said is true: Puerto Rico is buried in debt. It owes around $70 billion to creditors, an amount roughly equal to 70 percent of its annual economic output.

There are a book’s worth of reasons for this, which we’ll attempt to summarize here: Puerto Rico was long boosted by territory-specific tax credits that have expired, stifling its economic growth. Many skilled workers have come stateside, where more Puerto Ricans now reside than on the island itself.

Meanwhile, it’s attempted to make up for the loss of income by borrowing, raising money from the municipal bond market and in frankly predatory debt deals with U.S. hedge funds. The island’s debt has been determined “not payable.”

The Puerto Rico Electric Power Authority, or Prepa, is also in debt, to the tune of $9 billion. Part of Prepa’s still-in-process bankruptcy plan involves an austerity measure that limits repairs to utility infrastructure. Much of that infrastructure, already in disrepair, is now destroyed.

Prepa actually filed for bankruptcy under a new law called the Puerto Rico Oversight, Management, and Economic Stability Act. But that act already faces a legal challenge by one of Puerto Rico’s creditors, which have waged multiple legal battles to recoup their investments.

Why the need for a special law? Last year, the Supreme Court ruled that Puerto Rico couldn’t file for bankruptcy under Chapter 9, which permits local American governments to restructure debt. That decision is based on an inexplicable amendment to Chapter 9 law by South Carolina Senator Strom Thurmond in 1984 that specifically excludes Puerto Rico. All this essentially cements Puerto Rico’s status as a modern day colony.

Puerto Rico is poorer than any U.S. state. Its median annual household income is $18,600, and more than half of the children growing up there live in poverty.

That’s the main reason the damage to Puerto Rico is so much worse than what happened to Florida when Hurricane Irma hit. Both places weathered a Category 5 hurricane, but expensive houses built to code in Florida survived high winds. Houses in Puerto Rico built with corrugated metal roofs were flattened.

In the Caribbean, around 60-70 percent of construction is “informal,” that is, built by people making do with the materials they have on hand, says Joaquin Toro, an expert on disaster risk at the World Bank.

A lack of good infrastructure and emergency services make poorer places more vulnerable to disasters and complicate recovery efforts. The hurricane knocked out power and communications across the island, hampering the delivery of aid, and damage to air-traffic control towers has limited flights. “The problem right now is the air traffic control,” Governor Rosselló told Fox News.

Finally, the poorer people are, the closer they are to catastrophe. It means they’re less likely to have food and money squirreled away so they can stave off hunger in a crisis.

4. The problem with islands

There’s a grim economic logic to disasters. Those with the means get out, while the poor suffer. But on an island, even the rich can’t always buy an exit. That means there’s more people stranded, less food and water to go around, and more suffering.

As Donald Trump put it, assisting Puerto Rico is “very, very tough because it’s an island,” and that’s a crucial difference between recovery efforts there and those in Florida and Texas. “The difference is this is an island sitting in the middle of an ocean,” Trumps said. “And it’s a big ocean, a really, really big ocean.”

The size of the Atlantic Ocean matters less than the distance between the devastated islands and the mainland United States. An outdated U.S. law multiplies this distance, adding logistical hurdles to recovery efforts. This law, the Jones Act, passed in 1920 when Congress was still worried about the threat of German U-boats, carries a requirement that only American ships ferry supplies and passengers between U.S. ports (yes, Puerto Rican ports are considered part of the United States).

The Trump administration said it will not suspend Jones-Act restrictions for Puerto Rico as it did during Harvey and Irma to move oil from the Gulf Coast. Under the Jones Act, if someone wants to deliver food and water on a ship registered in another country, they have two choices: Go to Florida first and move the supplies to an American ship or pay a punitive tariff. The Trump administration appears confident that there are enough U.S.-flagged barges to carry supplies.

(Update: On Thursday, September 28, the Trump Administration reversed course and said it was waiving the Jones Act for Puerto Rico to allow more deliveries of food, fuel, and medicine to the island. )

Despite all the hurdles, aid is starting to arrive. But getting food, water, medicine, and generators to a tarmac in San Juan is one thing; getting relief to remote parts of the island is another.

Just 2,600 troops, three ships, and a handful of helicopters are deployed for relief efforts in Puerto Rico. Notably absent is an aircraft carrier, which could serve as a powerful core of support. There’s evidence that the taxing toll of the busiest month of hurricanes in history is slowing efforts — Maria so damaged Puerto Rico’s infrastructure that it’s not capable of hosting a full-scale relief effort yet.

In multiple statements, the Pentagon has said that additional help could be on the way at a moment’s notice, if it is ordered. The island is in a bit of a quandary: More help is needed to put the island in a position to accept a surge of aid needed to reach its people.

NOW: San Juan Mayor: people are dying; "we need to get our shit together". Mayor says FEMA is doing "assessment", she's begging for "action"

6. Climate change (this is Grist after all)

Hurricane Maria, one of the strongest storms in U.S. history, was Puerto Rico’s worst-case scenario, made even worse by the warming climate. Ocean temperatures in the storm’s path were at near-record levels, and the storm strengthened from Category 1 to Category 5 in less than a day, catching meteorologists and emergency management officials off-guard.

A warmer atmosphere amplifies a hurricane’s ability to cause torrential floods and destroy homes. Maria’s rains and winds reached a scale unseen in Puerto Rico’s modern history and followed a trend of increasingly severe storms in recent years.

What’s more, a record-setting heatwave hit the island over the weekend. Climate change is only one aspect of why Maria is shaping up to be a catastrophic disaster for Puerto Rico, but it made the storm and its aftermath worse.