The power's out in California. Is this what our future looks like? 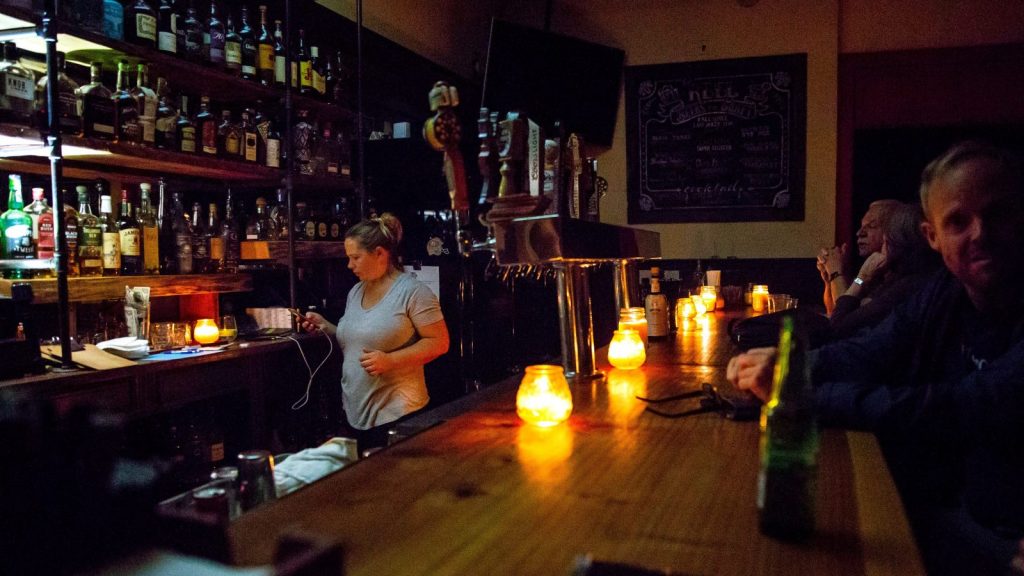 Does this look so awful? Photo by BRITTANY HOSEA-SMALL / AFP via Getty Images
outage outrage

The power’s out in California. Is this what our future looks like?

You’d think a power outage would make things quieter, but not so here in the hills above the San Francisco Bay Area. When the electricity went off it was replaced with wails of rage and the steady thrum of diesel generators. When I rode my bike up into the streets where the lights went off, I saw people seemingly going about their business as usual, with perhaps a little more frustration than usual. And I wondered if I was catching a glimpse of a future in which we constrain energy to restore the climate.

On Wednesday, Pacific Gas and Electric, the biggest power utility in California, turned off electricity for half a million people. Why did PG&E shut down big swathes of its system? Because it routinely sparks fires. Last year, when the dry winds began rushing across the state, drying vegetation to a flammable crisp and knocking tree limbs against power lines, PG&E considered shutting off the power. It didn’t, and the utility’s powerlines started the Camp Fire, which destroyed the town of Paradise and pushed PG&E into bankruptcy.

This year, PG&E is taking no chances. It’s working furiously to cut trees back from power lines. But the company has deferred far more maintenance than it could complete in one year, so it’s also switching off the power whenever the weather favors fire.

This sort of thing could become more common as the climate heats. First, warmer, wilder weather is likely to increase the danger of big fires. Second, society may opt for power systems that periodically go dark in order to slash emissions. It’s a lot less expensive to build a 100-percent renewable electric system if that system doesn’t have to be on 100 percent of the time, as David Roberts recently pointed out in Vox. When you’re dealing with renewable power controlled by nature, it’s much easier on the collective wallet to guarantee that the lights will stay on 95 percent of the time, while allowing for some blackouts on the 5 percent of days that are abnormally dark and windless.

So outages like this are a good test run for a climate-changed future. They give us a chance to see how we might cope with less reliable electricity.

For months, PG&E customers like me have been getting multiple mailings and emails warning of the coming service cuts, yet lots of people seem caught off guard. Shoppers cleared store shelves of batteries and flashlights this week, after learning the shutdowns were coming for real. Cars cued up at gas stations, orders for portable generators rose, and drivers slammed into each other as traffic lights went out.

The state highway agency, Caltrans, realized that the shutdown would sever roads where they passed through tunnels. Without electricity to run the ventilation, the poisons that spew from tailpipes would turn tunnels into deadly traps. So Caltrans announced that it would cut off a major artery where it passed through the Caldecott tunnel, but then, at the last minute, got diesel generators to keep the fans (and cars) moving.

Crews from @PGE4Me and @CaltransD4 are working to install generators at the #CaldecottTunnel in an effort to keep power on before the noon shutoff. We can hear the hum of generators from where we are. @KTVU #Caldecott #PSPS #poweroutage pic.twitter.com/WVXyTNp0Dd

Some grocery stores are running gas-powered generators to keep food from spoiling, water utilities are using them to keep pumps running, and they are rumbling along at hospitals to keep people alive.

The fact that turning off (relatively clean) electricity could lead to the burning of more (relatively dirty) diesel is one of those unintended consequences that might not spring to mind without this kind of test. But it turns out this is a well-documented phenomenon: In disaster zones and anywhere electricity is unreliable, people turn to diesel.

How do people feel about losing power? Oh, they were not pleased. Twitter was even more swollen with bile than usual, if you happened to stumble into #PGEshutoff or #PGEshutdown. Reporters had no trouble finding sources that wanted to piss on PG&E, and it looks like someone in the town of Maxwell (north of Sacramento) shot at utility workers, hitting a truck. Some anger is understandable. After all, PG&E funnelled money it might have spent on safety to investors. But it also suggests some baser instincts. Americans, especially, get heated when inconvenienced. The sporadic gas-price spikes of the 1970s helped set off seismic shifts in U.S. politics. It’s easy to imagine this tide of venom turning against renewable energy if it came with too many brownouts.

Ideally, we’d use this experience to learn and prepare. We’re going to have to figure out better backup power systems than diesel generators for important infrastructure like tunnels and water supplies BART — the local commuter rail system figured out how to pull electricity from multiple parts of its system to keep moving (though it wasn’t perfect). Utilities and local governments are going to have to figure out how to make the electrical systems of the future reliable enough to keep people from losing their minds, setting fire to City Hall. Outage outrage is a thing. If only we could channel all that self-righteous anger back into the power lines.