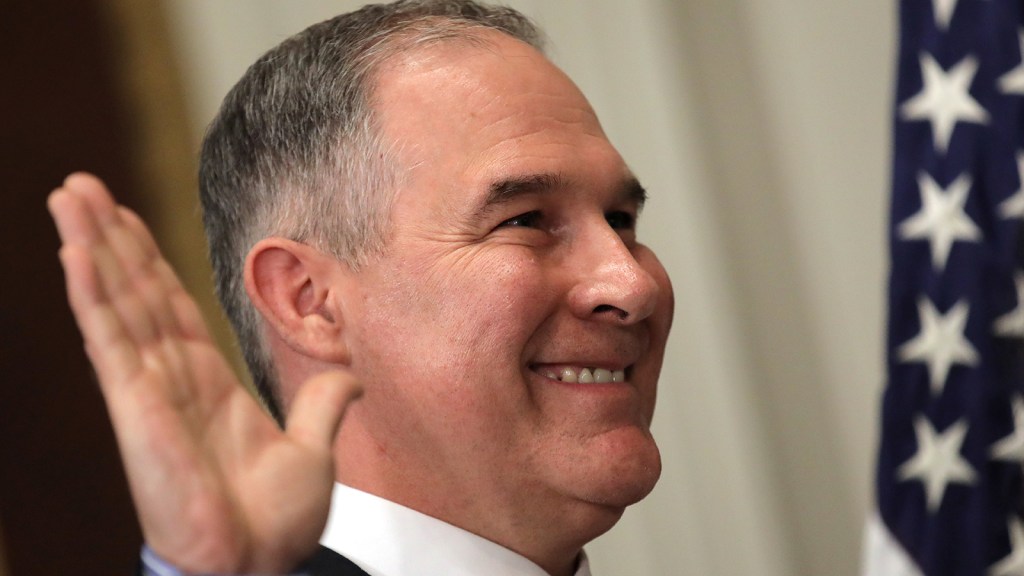 The far right’s opinion of Environmental Protection Agency chief Scott Pruitt has plummeted since the time Breitbart News praised him for doing “the Lord’s work” in early March. In only a few short weeks, Breitbart’s tone shifted, so by the end of the month, the news site, described by Trump adviser Steve Bannon as “the platform for the alt-right,” warned, “If Scott Pruitt is not up to that task, then maybe it’s about time he did the decent thing and handed over the reins to someone who is.”

Criticism from the left and center was inevitable for a former attorney general who challenged environmental rules on 14 occasions. But the same week the Trump administration rolled out its executive order targeting the Obama administration’s work on climate change, Pruitt also faced an onslaught of unexpected criticism from the far right. Climate change deniers think Pruitt hasn’t gone far enough or fast enough or stood his ground defending their position on the science. And that’s just for starters.

As I previously reported, one issue tops climate change deniers’ wish list for the Trump administration, and that’s gutting the climate endangerment finding. The endangerment finding is a science-based determination that greenhouse gases pose a threat to Americans’ health. Prompted by a Supreme Court decision in 2007, it is the foundational basis for the agency’s regulatory work on climate change.

Analyst H. Sterling Burnett of the Heartland Institute — the right-wing think tank that is best known for pushing out misinformation on climate change — rattled off reasons he’s happy with what Pruitt and the Trump administration have done so far in their reversal of a Clean Water Act rule and clearing the way for the Keystone XL and Dakota Access pipelines. But he was firm that the endangerment finding still must go. “My belief is if he doesn’t ultimately get rid of the endangerment finding it undermines all the good work so far,” Burnett said. He notes the endangerment finding poses a legal problem for his organization’s ambitions of gutting the EPA as we know it.

“The endangerment finding ultimately undermines all the climate rules Obama sought to impose,” Burnett continued. “If all Trump does is revisit the Clean Power Plan and the fuel economy standard and withdraw it, environmentalists can just go to court and say, ‘This is an endangerment to human health — you’ve got to do something.’ I think the courts will say, ‘You know, you’re right.’”

Heartland, which has received funding from the Koch brothers and Exxon and ultimately wants to end the EPA, isn’t the only one echoing this all-or-nothing thinking. “People I know are trying to finesse around the [endangerment] finding,” Cato Institute’s Pat Michaels said to Heartland Institute’s gathering of climate change deniers in late March. “There is no way to finesse around a monster.”

There appears to be an unconfirmed rumor circulating in climate change denier circles that Pruitt has not read EPA recommendations from the transition team, which was led by the Competitive Enterprise Institute’s Myron Ebell. That’s according to Steve Milloy, who contends the EPA overstates the dangers of air pollution; he has also denied human contributions to climate change.

Climate change deniers make rescinding the endangerment finding sound simple. It isn’t. Climate advocates and former EPA officials remain confident it will survive, even as Trump takes aim at much of the EPA’s Obama-era climate work, from fuel economy standards to its regulations on power plants.

“The science basis for climate change and the fact that human activity is the driver of increased CO2 in the atmosphere is, if anything, more compelling than it was in 2009,” said ex-EPA air chief Janet McCabe in an email to Mother Jones. “Any review of the endangerment finding would need to consider all the available science and respond to the public comments that will certainly be provided to the agency on such an important issue. Any revision to the finding will surely be challenged in court, and EPA would need to be able to defend in court any conclusion that is contrary to the vast majority of climate and other scientists in the U.S. and around the world.”

One executive order targeting a broad swath of climate initiatives wouldn’t be enough for the hard-liners. And aside from not having eliminated the endangerment finding, Pruitt is getting slammed by people who should be his natural supporters.

Fox News moderator Chris Wallace asked Pruitt on Sunday about his recent remarks denying the role humans play in climate change and the health consequences of Trump’s EPA budget cuts. Pruitt had said he would “not agree” human activity is a “primary contributor to the global warming that we see.” Pruitt’s original comments have reportedly prompted a review by the EPA office of scientific integrity and drew a rare rebuke from the American Meteorological Society. During the Fox interview, Pruitt still walked the line of climate denial but more subtly, saying that “climate is changing and human activity contributes to that change in some measure.” Breitbart columnist James Delingpole seized on the exchange, criticizing the EPA administrator for wobbling on science denial. It was “an ugly and painful sight,” he wrote.

The problems don’t end there. The Trump administration hasn’t yet filled any of the key political appointments at the agency, even as several on its transition team have stepped down. David Schnare, who like Pruitt sued the agency when he was at the conservative Energy & Environment Legal Institute, recently resigned, cryptically hinting at his frustration with the slow pace of changes the Trump administration is making at the agency. “The backstory to my resignation is extremely complex,” he told E&E News. “I will be writing about it myself. It is a story not about me, but about a much more interesting set of events involving misuse of federal funds, failure to honor oaths of office, and a lack of loyalty to the President.”

The Washington Post suggested one theory for why things are moving slowly: “Pruitt is bristling at the presence of former Washington state Sen. Don Benton, who ran the president’s Washington state campaign and is now the EPA’s senior White House adviser.”

Then there is the pesky problem of an investigation of Pruitt by the Oklahoma Bar Association following complaints that he lied to Congress about using a private email for state business as attorney general. Less significant, but still embarrassing, the EPA didn’t quite explain how it swapped out a coal-state Republican’s glowing review of Trump last week for a Democratic senator’s blistering take. For Breitbart, this was enough to suggest that a Deep State conspiracy was at work.

Pruitt hasn’t offered any direct response to all these criticisms, but he appears to be paying attention to the conversation in conservative circles. He gave Breitbart an “exclusive” at the EPA headquarters the same week of its columnist’s critical take.

In that interview, Pruitt left the door open for changes to the endangerment finding. “I think that if there are petitions for reconsideration for the endangering [sic] findings, we’ll have to address those at some point,” Pruitt said. Nonetheless, at his confirmation hearing a month earlier, Pruitt, a lawyer by training, gave a more definitive answer to Democratic senators when they asked him about it. “Nothing I know of that would cause a review at this point,” he said.

Heartland’s Burnett still seems willing to give Pruitt and the Trump administration some benefit of the doubt that they will eventually do the right thing to appease conservative critics. “It’s just so early that I think it’s too early to hit the panic button,” Burnett said. “I haven’t given up hope that just because it wasn’t in this set of executive orders that it won’t be forthcoming.”

But, Burnett added, “You never know.”