The unlikely champions of a carbon-tax plan: Republicans 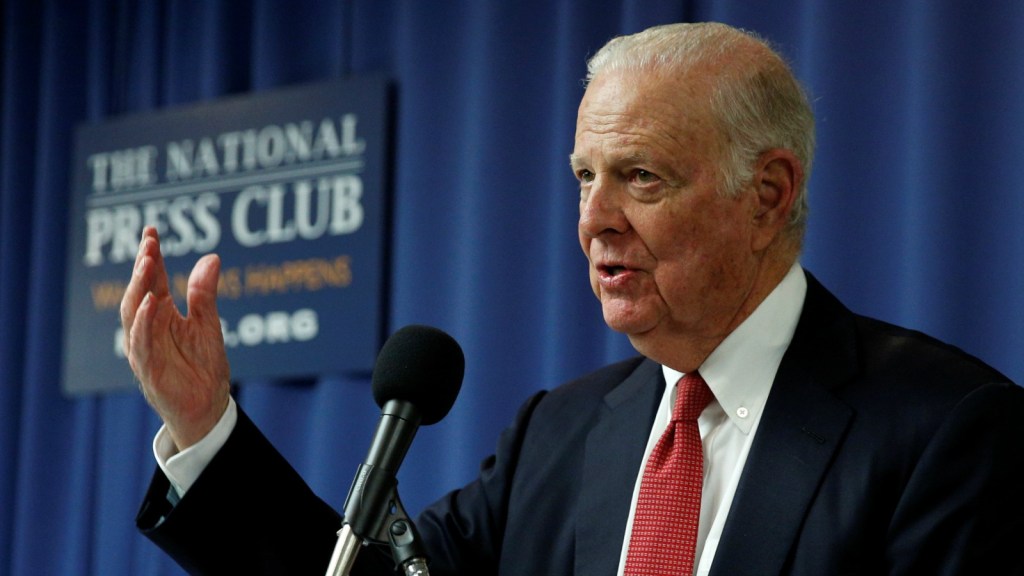 The unlikely champions of a carbon-tax plan: Republicans

You wouldn’t know it by looking at Congress or the White House, but the GOP isn’t in complete lockstep when it comes to climate change denial. The deniers just happen to be the ones who hold all the political power within the party. They drown out the other side — the conservatives who are urging their party to actually do something about global warming.

The contrast was especially clear this week. Just a day after Republicans on the House Science Committee accused government scientists of fabricating climate research, a group of Republican luminaries who don’t currently hold public office held a press conference calling for climate action. Specifically, they released a report — titled “The Conservative Case for Carbon Dividends” — in which they advocated a tax on carbon emissions.

The report, which was published by the Climate Leadership Council, calls for a tax on carbon starting at $40 per ton and rising over time, with revenue returned to taxpayers in the form of quarterly Social Security dividends. The authors include James Baker, who served as secretary of state and secretary of the treasury in the Reagan and first Bush administrations; Henry Paulson, who served as treasury secretary in the second Bush administration; Reagan Secretary of State George Shultz; and Martin Feldstein and Gregory Mankiw, who chaired the President’s Council of Economic Advisers under Reagan and George W. Bush, respectively. They see the tax as a replacement for the Environmental Protection Agency’s regulations on greenhouse gases, including the Obama administration’s Clean Power Plan. The proposal would also include a border adjustment designed to tax products from countries that do not have a similar carbon price.

For these conservatives, a carbon tax would be like insuring against the worst risks of climate change — and they see it as a more efficient solution than EPA regulations. They describe their plan as “win-win” — even if some of them still claim to quibble with the science.

“For too long, we Republicans and conservatives haven’t occupied a real place at the table during the debate about global climate change,” Baker said at a Wednesday press conference. “Instead, we have tended to dispute the fact of climate change and particularly the extent to which man is responsible for any changes in the Earth’s climate. Now I need, in the interest of full disclosure, to tell you that I was and remain somewhat of a skeptic about the extent to which man is responsible for climate change. But I do think that … the risks are too great to ignore, and that we need some sort of insurance policy.”

None of the report’s authors currently hold public office. But Baker was scheduled to meet Wednesday with Vice President Mike Pence, Ivanka Trump, and her husband Jared Kushner (who serves as a presidential adviser), and Trump adviser Gary Cohn to discuss the recommendations.

There’s a very different conversation underway in the House, where Republicans are obsessed with finding a smoking gun that would expose global warming as a myth. Lamar Smith (R-Texas), who chairs the science committee, held a hearing yesterday titled “Making EPA Great Again,” during which he and his colleagues accused federal agencies of falsifying data and pushing a climate hoax.

Smith cited allegations made by former NOAA data scientist John Bates that the agency mishandled data used in a 2015 study challenging the belief that global warming had “paused” in recent years.

“Everything I have read suggests that NOAA cheated and got caught,” Smith said. At another point, he said NOAA scientists wanted to “falsify data to exaggerate global warming.” (Bates, for the record, told the Associated Press that his concerns don’t undermine the scientific consensus that humans are warming the planet and that his NOAA colleagues had done “nothing malicious.” He said the controversy is “really a story of not disclosing what you did. It’s not trumped up data in any way shape or form.”)

For the conservatives behind the Climate Leadership Council report, the debate about science isn’t the point. Benefits of a carbon tax “accrue regardless of one’s views on climate science,” the paper’s authors write.

But this message has hardly gotten anywhere with GOP politicians in the past. And even Baker cautioned against optimism that Trump’s White House will reverse course. “We have no assurance at all that this is going to be something that the administration will grab hold of,” he said. “We happen to believe that this will help make America great again, but that’s our view.”