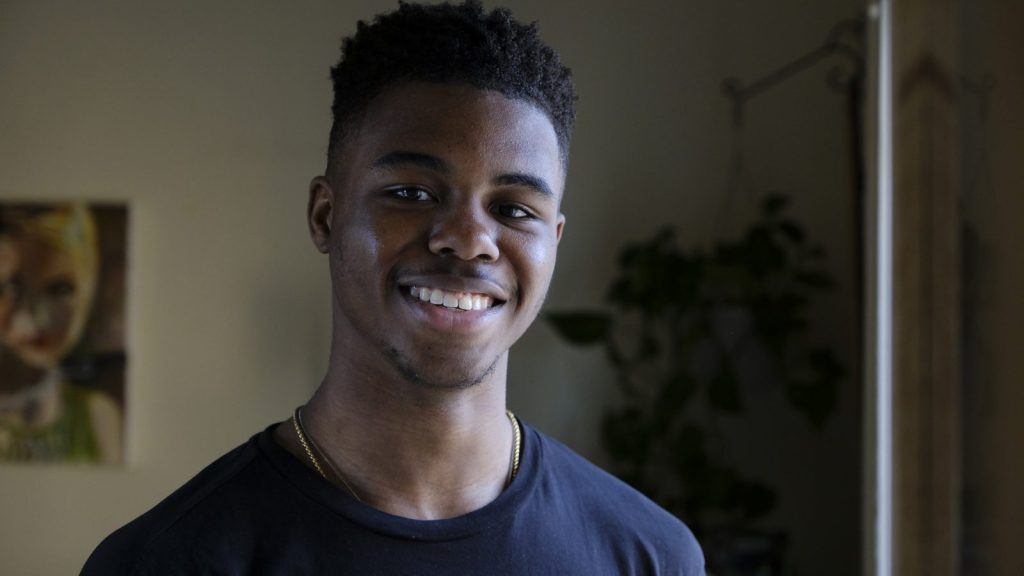 “Hope is a tiny, glowing thing that takes root,” Sylvi Stein says into the microphone, her words echoing through the nearly empty cavernous church. The 16-year-old is practicing her poem, titled “The Great Barrier Reef is Dead,” one last time before she performs it in front of a crowd at Harlem’s historic Apollo Theater on Friday.

“The door is locked, and we have no seat at the table,” says Andreas Psahos, a 17-year-old from Queens. “In fact, we aren’t even allowed into the room, clawing at the wood and peeking through the keyhole.” During his practice performance, I happen to look back at his some of his peers, clustered in the first few pews. They’re staring transfixed, quiet, some smiling, some snapping their fingers at particularly poignant lines.

Around the world, more and more young people are demanding action on climate change, and the teens assembled at the Community Church of New York on Park Avenue this past Saturday are adding their voices to that chorus. But this is a different kind of protest: Climate Speaks is a spoken-word youth poetry performance that gives students the chance to express their grief and hope through art. The show is put on by the Climate Museum, a new nonprofit in New York City that aims to raise awareness and educate the public about the climate crisis.

“Art is essential in shifting our culture on climate,” said Miranda Massie, the director of the Climate Museum and organizer of the event. “It reaches us at the visceral, the emotional, the communal. Art is absolutely essential to reaching people through their feelings of being connected to others.”

She goes on to cite a statistic from a recent Yale Climate Communication report: 69 percent of Americans say they’re anxious about the climate, but only 8 percent are regularly talking about it. “Most of us are responding with a sense of overwhelmed isolation and anxiety feeling the problem is far too big for us,” Massie said, explaining part of the reasoning behind the show. “We need to feel connected to other people.”

The Climate Speaks program was born out of chance. During a design workshop hosted by the Climate Museum, Massie and her co-organizers gave teens tools like iPads and markers to make art about climate change. Without prompting, many chose to do spoken word. “You could see the impact it was having,” she said, of the poems the young people performed. “The whole room was affected.”

The teens who will be featured at the Apollo made it through a months-long audition process that drew dozens of young people from throughout the city’s five boroughs. On Friday, for just one night, they’ll share their deeply moving words onstage.

“Young people have a moral and a political claim in this area that has to be heard — it has to be heard if we’re to call ourselves a civilization,” said Massie. “We need a massive level of motivation and resolve.”

Back at the church this past Saturday, the 14 poets sit silently and watch their peers rehearse, awaiting their turn on the mic. There’s no texting or whispering — they’re completely focused. One by one, they take their place on the stage, projecting their words out toward the back of the room like professionals. After two months of drilling on enunciation and stage presence and getting feedback from the program’s artist mentors, they’re almost ready for their debuts.

Onstage, one teen stumbles a little over her lines, and quickly glances at a crumpled sheet of paper in her hand. It’s a sudden reminder that it’s high schoolers who wrote these heartbreaking, beautiful words. These 14- to 18-year-olds are so poised, it’s easy to forget that some of them had never taken part in a performance like this.

This is the first time the Climate Museum, which is less than three years old, is putting on this type of event. And it hasn’t been without its bumps. Next year, the audition process will likely start in October, rather that in the spring, Massie said. High schoolers have a lot to worry about during the spring months, between finals and standardized tests and college prep, so she wants to give next years’ participants even more time to learn from the mentors in the program and get comfortable on the stage.

Another knot to untangle: ticket sales. Up until now, the Climate Museum has always offered their events — art exhibitions, workshops, and panels — for free. Those events have been widely praised, and often “sell out.” But getting folks to shell out money (tickets are $20) for their programs is something they’re still working on. She expects at least the orchestra seats to sell out Friday night.

Above: Sylvi Stein, one of the student poets, remembers when she first became aware of pollution and climate change. Photo: Sari Goodfriend.

Filling out the rest of Harlem’s 1,500-seat Apollo Theater (a venue historically focused on showcasing African American artists and the former home to Showtime at the Apollo) could be a challenge. Still, Massie said there’s nowhere else they’d rather hold the show. “It’s a stage and an institution deeply involved in the history of social progress and movements for a change in the U.S.,” she explained. “It’s a place for justice.”

While chatting with Elizabeth Shvarts, a 14-year-old poet, after the rehearsal, I tell her that when I was in high school, I was interested in the environment, too. “Cool, did you and your friends organize and go to protests?” she asks.

I tell her that in 2008, hoards of young people weren’t flooding the streets on a regular basis to shout about the plight of the Earth. It was more about getting people to recycle and take hybrid cars seriously. Her simple question, and the assumption behind it, I thought, shows how far this movement has come — and how much higher the stakes are today.