It was only two weeks ago that 16-year-old Azalea Danes says she officially became a climate activist, but she’s done her best to make that time count.

It all started after the high school junior, who attends Bronx School of Science, read about 13-year-old fellow New Yorker Alexandria Villaseñor’s protests outside the United Nations headquarters. Danes’ hunger to learn more quickly snowballed from there. She watched a TED Talk by Greta Thunberg, the Swedish teen who was just nominated for a Nobel Peace Prize after going on strike to protest government inaction on climate change, eventually sparking a global movement. When Danes found out that a massive youth climate strike was coming to the U.S. on Friday, March 15 and thought to herself: “I need to do something about this personally in my community.” 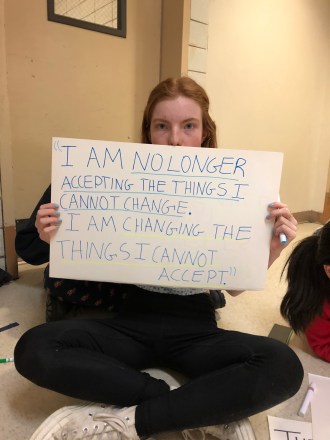 Danes is one of the hundreds of thousands of young people participating in today’s global Youth Climate Strike, walking out of classes to protest global leaders’ climate inaction. These kids, many of whom are still in elementary school, may be comparatively new to the environmental movement, but they are among the most motivated stakeholders in today’s climate movement. And they don’t just have their eyes set on a Green New Deal — many of them are looking for solutions closer to home.

The day after Danes found out about the youth climate strike she started an Instagram account to recruit her classmates to join her in a walk out. Within days, she had linked up with other climate-concerned students to draft a mission statement for their strike. And soon, more than 100 of her schoolmates had RSVP’d to the event on Facebook.

The students weren’t just playing hookie. Danes and her peers at the Bronx High School of Science crafted goals intended to make their school greener — demands for which they are willing to suffer through detention in order to make a reality.

Kids at the school are no slouches when it comes to academics — Bronx Science is a specialized public school in New York City that kids must test into to snag a coveted spot  (it’s where actor Tom Holland went undercover for a few days to research his recent role as Spiderman).

Although Danes says she was able to get approval to miss her class for the strike, many others at the school were denied – sometimes because they applied for a pass too late, or because they had a history of tardies or absences. Students without a pass receive a “cut” for missing class, which will only be removed from their record if they serve detention. A “cut” on your record could also have bigger ramifications. Today is the first day that students can select courses for next year — they have a week from now to make their choices. And anyone with cuts on their record won’t be able to enroll in Advanced Placement classes.

With academic pressures working against them, strike organizers at the school had to make a compelling pitch to get kids to skip out on class. “No matter how smart and driven we are to do well in school, we really have to prioritize our own future, take advantage of our civil responsibility, and protest when something needs to happen,” said, Alysa Chen, a 17-year-old senior who is the president of the school’s environmental club.

Chen has been making announcements and organizing other kids in her classes. And on Friday morning, she led roughly 100 students out of around 3,000 enrolled at the school who walked out of their school chanting, “Who’s power? Students’ power!”

On Friday morning, the students walked out through the front doors of the school, past the flagpoles, and across the street to an open sports field. Standing on the bleachers, Chen and other leaders spoke to the crowd of students, including a couple dozen who joined them from another nearby high school.

“I have missed a math test. I’m screwing up my grades,” Bronx Science senior Sebastian Baez told the crowd through a megaphone. But “we are not here to skip school. We are here to change the world.” He then urged his peers to contact elected officials, to register to vote, and to keep talking about climate change after the strike ends — especially back at school.

17-year-old senior Eytan Stanton is another organizer of the strike along with Baez, Chen, Danes, and three others leading the work at Bronx Science. After consulting with his school’s building engineer on how to cut down the campus’s carbon footprint, he worked with his schoolmates to write up sustainability goals, which they included as part of their demands for the strike. Together, they broke down the goals for greening the school into short, medium, and long-term deliverables. 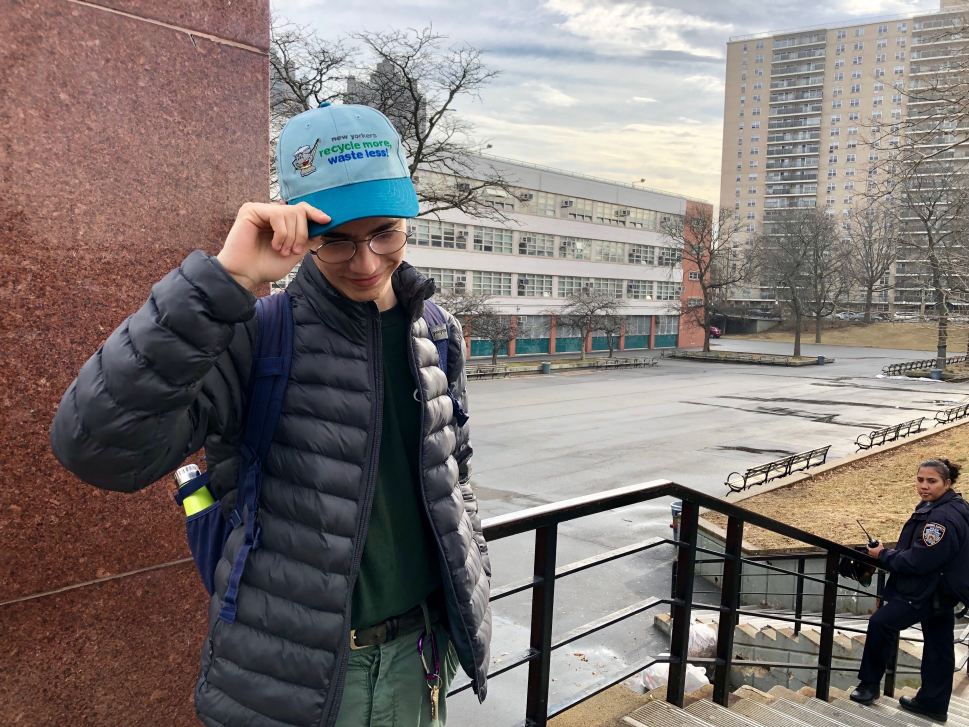 The students found the most immediate gains would come from updating the school’s heating system. They want the school to get a summer boiler that they say will be more efficient in heating hot water during warmer months, allowing the school to shut off its larger boilers. They also want to switch from burning No. 2 oil for heat to natural gas to reduce greenhouse gas emissions.

The students are also pushing for smaller actions that have more to do with administrative choices than with big infrastructural changes. They want to make sure all computers are turned off for the weekends, and that utensils used at lunchtime aren’t wrapped in plastic. They also want to see more curriculum on climate change and instruction on how to make personal changes to live more sustainably.

The students have loftier aims for the longer-term, including switching to LED lighting, installing solar panels, and electrifying the heating system.

“It’s all backed by science, and it’s feasible,” said Stanton.

The Bronx Science students say their local focus doesn’t mean they’re ignoring the big picture. Along with those goals, they wrote a mission statement modeled after the format of a U.N. resolution, calling for a “war on climate change” and commitments to stick to goals set in the Paris Agreement.

Around 10:20 on Friday morning, after rallying outside their school for nearly an hour, about half of the crowd returned to class. The roughly 50 remaining students made their way to join a larger rally at New York City Hall. On the subway heading downtown, Arianna Luis, 17, Amara Reid, 17, Maya Schucherm, 16, and May Wang, 16, described what what was at stake for each of them. Of the four girls, only Luis didn’t get a pass to miss class, so she was marked absent for the day, but she had explained to her mom the night before why she was still going to rally. Luis said she feels her community has too much on the line to let an absence stand in the way of taking action.

“If you look at where my family is from in the Dominican Republic, people are farmers,” Luis said. “And if you don’t have enough water to water your crops, nobody’s eating.” Her classmates chimed in, each sharing the effects of climate change and burning fossil fuels that they see all around them — from pollution making people sick in the Bronx and in Beijing, where Wang’s family is from, to dirty beaches that Reid visited the last time her family returned to their native Jamaica. 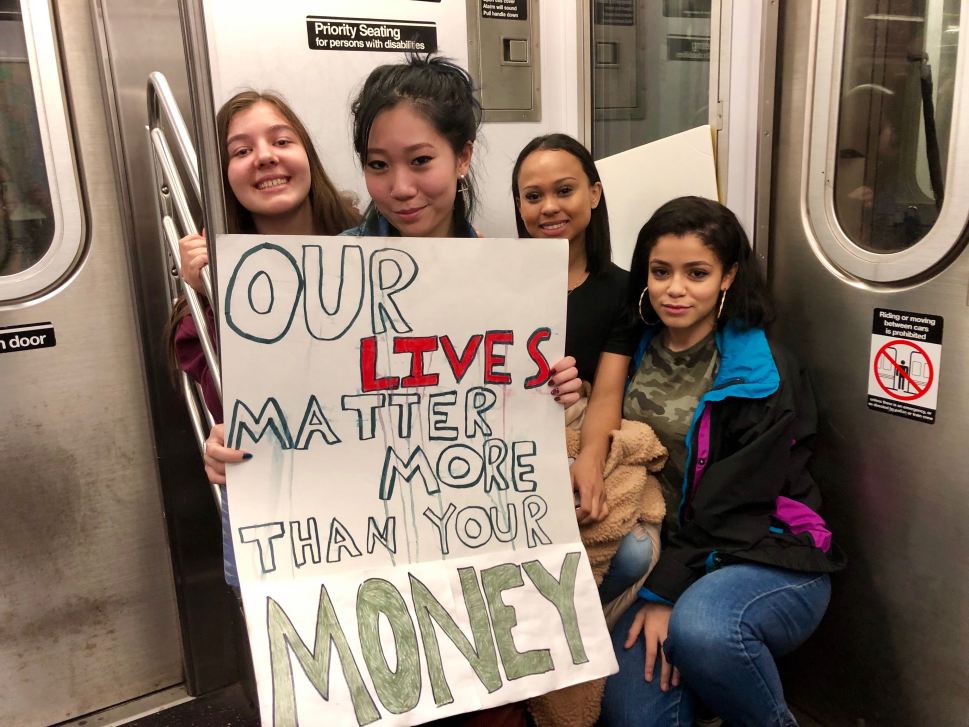 The students say they know they won’t see changes overnight. Stanton and Chen, who worked to draft the demands for their school, expect the work to continue long after they graduate at the end of of the school year.

For all the Bronx Science students carefully researched demands to their school (they also met with the school’s assistant principal when drafting their plan), the district’s reaction has not yet been fruitful. The New York Department of Education has not endorsed their goals, and efforts to reach assembly members asking them to put pressure on school officials to grant amnesty to student strikes have gone unanswered.

The New York City Department of Education emailed this response to Grist: “We encourage our students to raise their voices on issues that matter to them, and we also expect our students to be in attendance during the school day. We’ve issued guidance to school communities, and encourage schools to have discussions on current events and about the importance of civic engagement.”

Of the seven authors of the Bronx Science mission statement, Danes is the only underclassman who will still be at Bronx Science next year. Still, she also knows she won’t be alone. She’s exchanged emails with Alexandria Villaseñor, one of the organizers of the U.S. Youth Climate Strike. “I really would love to [meet] because she has been really my inspiration along with Greta Thunberg,” said Danes. At 13, Villaseñor is three years younger than Danes. So who says your role models have to be older than you? 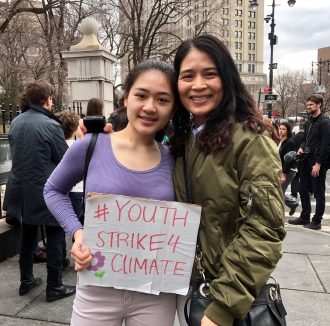 As the rally continued outside New York’s City Hall, Alysa Chen’s mother, Marian, joined her daughter during her own lunch break from work. Standing nearby, she held her daughter’s bag and took photos as Alysa led chants and paced along the long line of young people singing in protest.

“I’m so happy they’re taking the lead to save everyone on earth,” Marian Chen told Grist. “Including us.”

Breaking: Across the globe, students go on strike to demand climate action