Last winter, a few dozen scientists and faith leaders walked into the Archdiocese of Boston headquarters in Braintree, Massachusetts,* to talk climate change. The meeting took some time to find its footing — after all, these two camps don’t always speak the same language.

“There was a lot of enthusiasm,” recalled Dave McGlinchey, the communications and government relations manager of the Woods Hole Research Center, which co-hosted the meeting. “But it wasn’t really focused.”

Then the Reverend Mariama White-Hammond cut to the chase: Faith leaders and scientists may come at the issue of climate change from different angles, but they share an understanding that it is a moral emergency. “She spoke so compellingly,” McGlinchey said. “She connected the conversations in a really concise way.”

A year later, the policy advocacy group — now called the Faith Science Alliance for Climate Leadership — is delivering its message to the public and politicians, with a mission statement distilled from her short speech.

White-Hammond, a 2019 Grist 50 member, has a knack for finding common ground. In addition to being the pastor of the New Roots African Methodist Episcopal Church in the Boston neighborhood of Dorchester, she is also a devoted activist, a prolific board member, and an in-demand speaker for ecological and justice events in the state and beyond. She uses these platforms to reinforce less-than-obvious connections — and to help her forge new ones, whether between economic and environmental concerns, underserved communities and clean energy providers, or faith leaders and scientists.

“People are like, ‘You’re a minister! How does all this work?’” she said about connecting faith to, well, you name it. “But to me, faith is about living what I believe in, in every sphere of my life.” If she can demonstrate how all of those spheres overlap, she thinks, she can help the rest of us get there, too.

White-Hammond grew up in a household that aimed to change the world. Her parents, the Reverend Ray Hammond and the Reverend Gloria White-Hammond, are both community leaders as well as ministers, deeply involved in social justice and philanthropy. Her father is a former chair of the Boston Foundation, one of the nation’s wealthiest community trusts, and is a trustee of the Isabella Stewart Gardner Museum; her mother is on the board of Tufts University and has been heavily involved in anti-genocide activism, particularly in Darfur.

“By choice, my parents raised us in the inner city of Roxbury at a really challenging time in Boston’s history,” the Reverend Mariama White-Hammond said. That was when black communities were so underfunded and ignored by the city that they considered secession. Growing up in that time and place helped create a bond with her struggling neighbors, she explained, even as she attended an elite and mostly white private high school.

That experience of having a foot in two different worlds taught her to move easily between disparate communities. She spent more than a decade as the director of Project Hip-Hop, helping local youth make art about everything from street violence to deportation. For a while, though, environmental problems didn’t make the cut. “I had the mentality, ‘Let wealthy white people work on that!’” she recalled.

She was always engaged in politics — in 2006, she was a ward coordinator for then-Governor Deval Patrick’s re-election campaign. But helping out in New Orleans after the storm led her to realize there might also be a place for her in the ministry. Social justice is a large part of the African Methodist Episcopal, or AME, religious tradition, and White-Hammond’s strengths — particularly her warm, sincere presence, and commanding voice — lend themselves to the pulpit. In 2014, she went to seminary, and until recently was the ecological justice minister at the church her parents lead, Bethel AME in the Jamaica Plain area. She originated the position, which involved encouraging worshippers to understand their own relationships with the natural world and to fight its degradation. 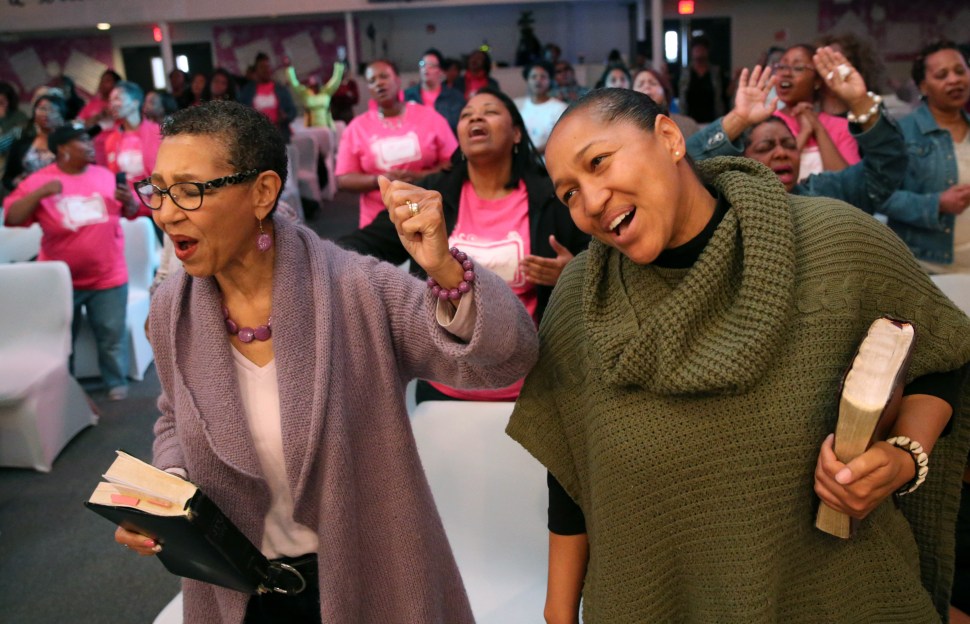 Rev. Dr. Gloria White-Hammond and her daughter Rev. Mariama White-Hammond join the crowd in song and prayer during during a 2017 women’s conference at the Jubliee Christian Church in the Mattapan neighborhood of Boston. Craig F. Walker / The Boston Globe via Getty Images

In 2016, thanks in part to her efforts, the national AME church, which had never before weighed in on the issue, passed a resolution that highlights how climate change disproportionately affects communities of color. She’s in regular demand as a speaker, but for her the most important engagements are those that bring her in front of people who might not see themselves as part of the climate movement, including young people, low-income people, and people of color. She hopes to reach 10,000 youth this year, and, so far, is on track.

Connecting these issues in the way she does can expose problems — and reveal new opportunities. A few years ago, White-Hammond worked on an initiative to install solar panels on the roofs of several local churches, including Bethel AME, where she was ministering. She got the congregation on board, worked with other faith leaders, and helped bring in solar installers who hire people of color.

They planned to sell back some of the extra power their panels generated in order to recoup overhead costs, and donate the rest of it to community members. Then, more than a year into the process, a change in state law slashed the price of solar power, reducing the amount of money the churches would receive. A couple of congregations dropped out, and the remaining ones could install only about half as many panels as they’d originally envisioned.

It was evidence of what can happen when people in power don’t recognize the relationships between different forms of oppression, she said. Nonetheless, the project helped her bring a whole new group of people into the movement, and she believes they’ll stay active. “If people can start seeing solar on their roof, and feel like they’re part of the green energy revolution, they’re going to engage on the next thing, right?” she said.

After the churches invited two local politicians to the ribbon cutting, White-Hammond and other organizers began working with them to reverse the worst effects of the recent law change. The Green Justice Coalition, a labor and environmental partnership that White-Hammond is a part of, has made solar energy access for low-income people the focus of its 2019 campaigns. And White-Hammond now advises Sunwealth, the investment firm that helped fund the church panels, on how to find similar projects.

In the little free time White-Hammond has, she likes to keep up her own relationship with the earth through her vegetable garden — which is, wisely, in a community plot, with neighbors who are happy to help water her plants. “If I had to maintain that garden on my own, it would be a disaster,” she said. “But because I do it with others, it works.”

*Correction: This story initially stated that the meeting between scientists and faith leaders took place at the Woods Hole Research Center in Falmouth, Massachusetts.