Less than a year after Hurricane Matthew raked the East Coast, killing 34 people and causing $10 billion in damage in the U.S. alone, coastal areas are once again preparing for the onset of the Atlantic hurricane season.

This year, forecasters with the National Oceanic and Atmospheric Administration are expecting to see above average storm numbers in the Atlantic, despite the uncertainty of whether an El Niño will develop over the summer. The forecast is currently for 11 to 17 named storms to form, of which five to nine are expected to become hurricanes, and two to four major hurricanes (Category 3 or above). 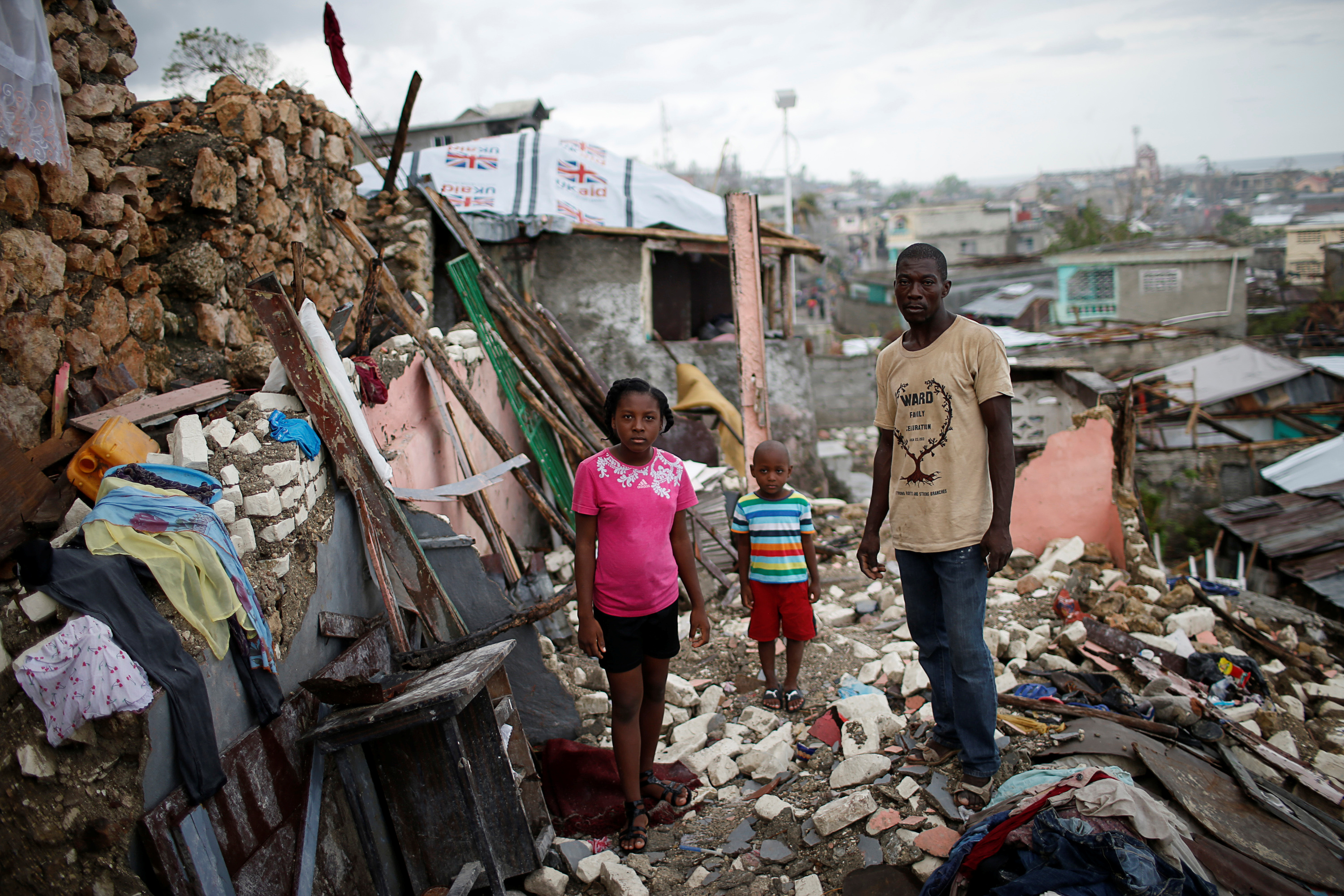 Prenille Nord poses with his family among the debris of their destroyed house after Hurricane Matthew hit Haiti in October 2016. REUTERS/Carlos Garcia Rawlins

The forecast, though, “does not predict when, where, and how these storms might hit,” Ben Friedman, the acting NOAA administrator, said during a press conference, as he and other officials urged coastal residents to begin their preparations.

During Thursday’s press conference, officials also touted the updated models and tools they have to produce better forecasts for individual storms, part of a concerted effort that has greatly improved hurricane forecasts over the past couple of decades. Those comments, though, come just a few days after the release of President Trump’s budget request, which calls for reductions to some of those very programs.

The 2017 hurricane season got off to an early start, with Tropical Storm Arlene forming in April, only the second April storm in the satellite era. Early storms, however, are not necessarily indicators of how active a given season will be.

To gauge the hurricane season, forecasters use various climatological clues, such as the state of the El Niño cycles, as well as expected trends in ocean temperatures and a measure called wind shear, which can cut off storm formation.

Whether an El Niño will develop is currently something of a question mark, though, with the odds about even for El Niño or neutral conditions this summer and fall. Also uncertain is whether any El Niño that does materialize will be strong enough to influence the Atlantic.

But sea surface temperatures across swaths of the Atlantic are currently above average and are expected to stay that way, and wind shear is also expected to stay low, both of which would tend to support more storm formation.

Those percentages translate to the ranges of numbers of storms expected at different strengths. The 11 to 16 named storms include those that reach tropical storm status or higher, defined as a storm with wind speeds of 39 mph or higher. Five to nine of those storms would be expected to strengthen into hurricanes, with winds in excess of 74 mph. And then two to four of those hurricanes would be expected to reach major hurricane status, defined as Category 3 or above on the Saffir-Simpson scale of hurricane strength, or winds above 111 mph.

NOAA evaluates the accuracy of its seasonal forecasts each year, with the aim of seeing the number of storms fall in the given ranges at least 70 percent of the time, which they do consistently, Gerry Bell, lead seasonal hurricane forecaster with NOAA’s Climate Prediction Center, said. 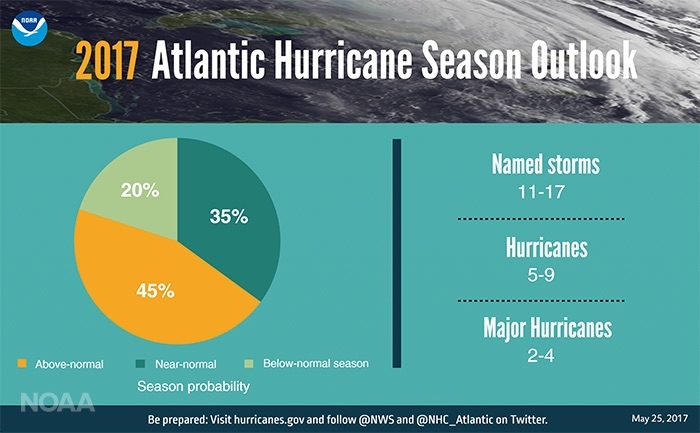 It has been a record-setting 12 years since a major hurricane made landfall on the U.S. coast; the last to do so was Hurricane Wilma during the blockbuster 2005 season.

“While some may think that’s lucky … in fact, tropical storms and lesser hurricanes can be just as damaging and just as deadly,” Friedman said, citing Matthew as a prime example. Matthew, which was for a time the first Category 5 hurricane to form in the Atlantic since Hurricane Felix in 2007, had weakened to a Category 1 storm by the time it made landfall in South Carolina last October.

The punishing storm surge that pushed ashore from Florida to the Carolinas and the torrential rains it dropped inland still made it the 10th costliest storm recorded in the Atlantic basin, according to the reinsurance firm Aon Benfield.

The impact of climate change on hurricanes themselves is active area of research; the general consensus is that there may be fewer storms overall in a warmer world, but a higher proportion of them will be major hurricanes. Major hurricanes have already increased in the Atlantic since 1970.

Some research has also suggested that the hurricane season could become longer, meaning more pre-season storms like Arlene.

During the press conference, Mary Erickson, deputy director of National Weather Service, touted the increased accuracy of hurricane forecasts resulting from investments into improving models. In the 25 years since Hurricane Andrew devastated southeastern Florida, the three-day track forecast for hurricanes has improved by 65 percent, she said.

Two new models coming online this season could improve forecasts even more. One, the Hurricane Weather Research Forecast model, includes better resolution of storms, advanced ways of feeding data into the model, and more accurate atmospheric physics, all of which could improve intensity forecasts for storms by up to 10 percent and track forecasts by up to 7 percent, Erickson said. 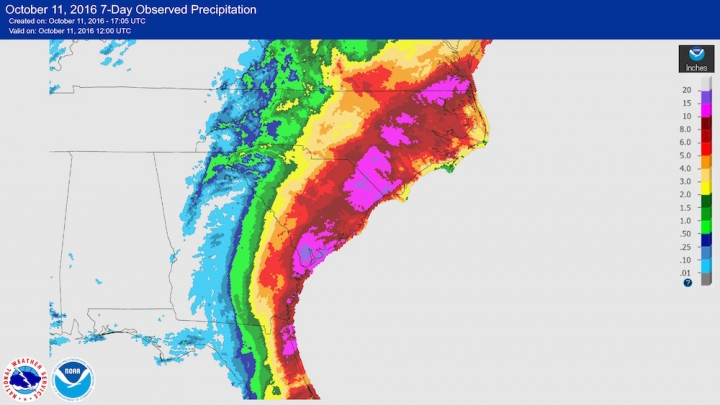 Rainfall amounts over seven days in the Southeast, most of which were due to Hurricane Matthew. NOAA

Many of the improvements to those models have come as part of a concerted effort called the Hurricane Forecast Improvement Program. That program was established by NOAA in 2009, in part as a response to the pummeling the U.S. received from a number of hurricanes during the early years of that decade and the relative lack of progress made in improving forecasts up to that point.

Trump’s 2018 budget request currently includes a $5 million reduction in funding “to slow the transition of advanced modeling research into operations for improved warnings and forecasts,” including the HFIP.

That budget provision doesn’t jibe with the bipartisan-supported Weather Research and Forecasting Innovation Act of 2017, which the president signed into law last month and which states that “NOAA must plan and maintain a project to improve hurricane forecasting.”

“I don’t think Congress will take his proposal seriously at all … so it can probably be ignored in favor of the legislation that has actually passed,” Brian McNoldy, a hurricane researcher at the University of Miami, said in an email. “But supposing Congress did pass his budget as-is, yes, it would be devastating to weather prediction across the board, including hurricanes.”

Forecasters will also be able to use the improved observations of the GOES-16 satellite, which has four times the resolution and updates five times faster than its predecessors. In particular, its lightning mapper will help forecasters better understand how a storm is developing, as lightning often accompanies rapid storm development. When it becomes operational later this year, GOES-16 will move into orbit over the East Coast, in prime hurricane-watching position, Friedman said.

NOAA is also making its previously experimental storm surge watches and warnings operational this year, in an effort to better prepare coastal areas under threat of flooding. Hurricane graphics will also include an experimental visualization of how far damaging winds extend out from the center of a storm.

NOAA will update its forecast in early August, just before the typical peak of the hurricane season.