Trespass near a pipeline, go to prison for 6 years? It could happen in Wisconsin. 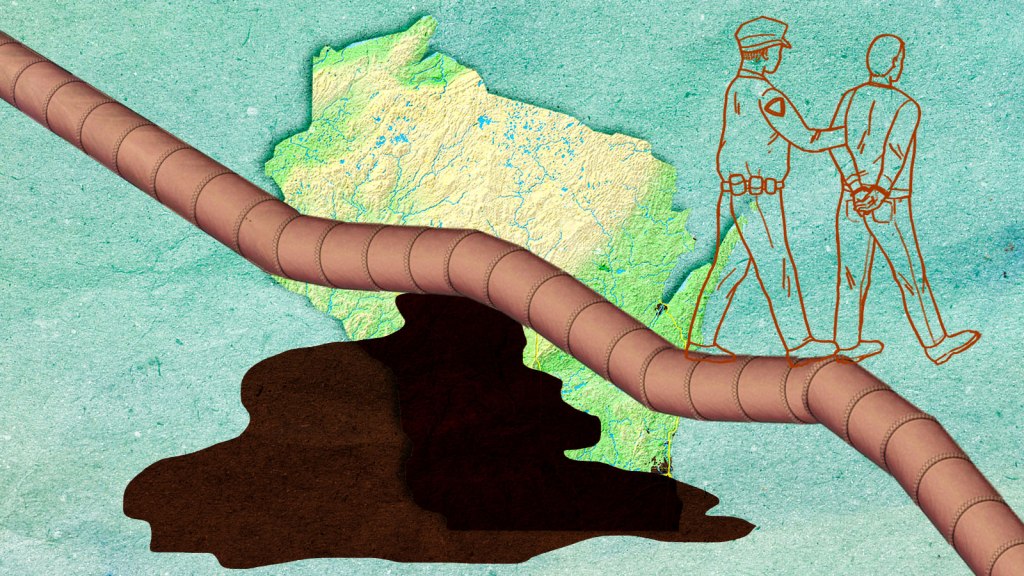 Trespass near a pipeline, go to prison for 6 years? It could happen in Wisconsin.

A bill that would make trespassing around oil and gas pipelines a felony, with up to six years in prison and $10,000 in fines, is working its way through the Wisconsin legislature. One of the bill’s cosponsors, State Representative Jason Fields, a Democrat from Milwaukee, said the bill is aimed at preventing damage to private property, though laws penalizing trespassing and damaging oil and gas infrastructure are already on the books.

“I don’t like the Ku Klux Klan,” he said, “but I do not have the right or the option to go and destroy their property.”

The bill is part of a wave of proposals across the country that raise penalties on protesters. At least eight other states have passed similar legislation, and few more have introduced such measures, according to the International Center for Not for-Profit Law, a group which has been tracking legislation criminalizing protest around the country. Many of the bills bear a striking resemblance to model legislation drafted by the American Legislation Exchange Council, a conservative think tank bankrolled by fossil fuel companies.

According to records obtained by the Center for Media and Democracy, a watchdog group based in Wisconsin, a lobbyist for the American Petroleum Institute played a critical role in drafting the Wisconsin legislation and recruiting sponsors. One of the bill’s sponsors as well as the chair of the state Assembly’s energy and utilities committee, State Representative Mike Kuglitsch, is a member of ALEC’s Energy, Environment and Agriculture task force.

The bill expands a 2015 law that made trespassing and damaging property owned, operated or leased by an “energy provider” — a term mainly limited to electric and gas companies — a felony. The new bill widens the definition to include companies operating petroleum, chemical, water and “renewable fuel” infrastructure.

At a hearing Thursday morning held by the Assembly’s Committee on Energy and Utilities, lawmakers who support the bill said that it wouldn’t restrict anyone’s ability to protest and that it merely increased penalties for those who damaged private property, such as the valve turners of Minnesota and people who’ve set fire to pipelines.

“This bill has nothing to do with whether you believe in climate change or not,” Fields said. “It certainly does not have the option to suppress the rights and free speech of somebody.”

Opponents of the measure point out that Wisconsin already has laws to punish trespass and damage to private property and worry that it would create “protest zones,” leading to confusion about where people could protest and chilling free speech.

The Wisconsin proposal differs from those in most other states in a few key ways. For one, the bill has the support of a broad coalition of groups, including oil and gas companies, utilities, workers unions and a renewable energy development company. At the hearing last week, Terry Hayden, president of the Wisconsin Pipe Trades Association, testified that workers “are feeling increasingly unsafe on those job sites,” because they’ve seen and heard of instances when people damaged equipment. “When vandalism occurs, the already present risk of serious workplace injuries is compounded.”

In Illinois, a similar effort to unite the oil and gas industry and trade unions behind a bill increasing penalties for damaging pipelines failed earlier in May.

Environmental activists have been trying to block the construction of Calgary-based Enbridge’s tar sands pipeline that would run from Alberta to Wisconsin. Six protesters were arrested for trespassing in 2017, and two of them were found guilty by a jury last year. At least one served 20 days in jail.

Patricia Hammel, who has represented landowners against Enbridge, cited those arrests as an example of laws currently in place to penalize trespassing. She said the justification for the legislation — worker safety — is a “smokescreen” for oil and gas companies.

The bill does “nothing to serve the public interest,” she said. “It only works to protect the fossil fuel industry … from the growing criticism and citizen actions against oil and gas pipelines in the face of the accelerating climate crisis threatening life on this planet.”