Trump is deluded if he thinks he can negotiate a new, better Paris agreement 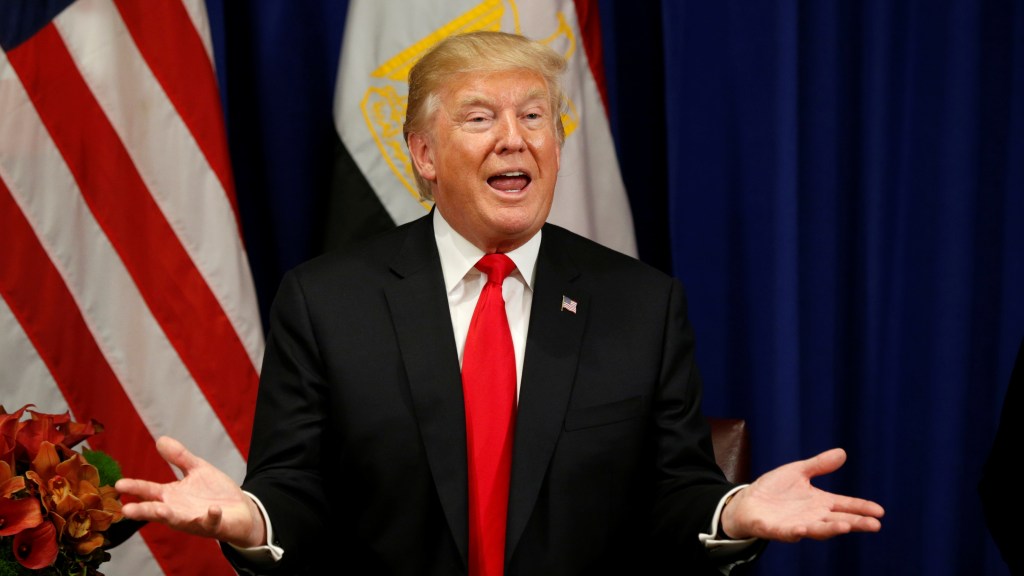 Trump is deluded if he thinks he can negotiate a new, better Paris agreement

Over the weekend, the Wall Street Journal reported that a White House staffer told foreign officials the president is considering remaining in the 2015 landmark Paris climate change agreement. The reported shift came on the eve of a United Nations General Assembly meeting in New York, where climate remains a main issue on the agenda. Within hours of publication, a posse of Trump officials went out of their way to discredit the story — which only added to the confusion.

“As the president has made abundantly clear, the U.S. is withdrawing unless we can re-enter on terms that are more favorable to our country,” deputy press secretary Lindsay Walters said in a statement Saturday. As reported in Talking Points Memo, a senior White House official told traveling press, “Consistent with the President’s announcement in June, we are withdrawing from the Paris Agreement unless we can reengage on terms more favorable to the United States.” The official said that White House economic advisor Gary Cohn made that position “very clear” to foreign representatives Monday. Adding to the confusion, Secretary of State Rex Tillerson appeared on CBS Sunday and said, “The plan is for Director Cohn to consider other ways in which we can work with partners in the Paris Climate Accord.”

Is it a shift? It may be, especially when compared to Trump’s rhetoric when he unveiled his decision in June: “I cannot in good conscience support a deal that punishes the United States.” (Technically, since Paris is not a treaty, the U.S. cannot be punished for non-compliance.)

Repeatedly, the Trump administration has invoked the notion of negotiating “better deals” with allies, and the climate agreement may be no exception. But even if this were technically possible, Trump doesn’t have the staff needed to remake a deal that was signed by nearly 200 countries in 2015, when they put forward domestic plans for how to tackle rising greenhouse gas emissions.

As Jake Schmidt, international program director at the Natural Resources Defense Council, observes, “It’s hard to do that on a shoestring budget.”

Any global agreement is an ambitious undertaking, and Paris was especially so. At various points, the Environmental Protection Agency, Department of Energy, Department of Transportation, and the U.S. Trade and Development Agency were involved in the programs surrounding the final compromise. The State Department played the lead role, as it does anything U.N.-related. But today, as with many government agencies, the State Department has dozens of vacancies, especially for ambassadorships, positions in the United Nations, and in its environmental offices. The Trump administration has also eliminated climate positions across the government and hopes to zero out funding for any program that mentions “climate.”

In addition, Tillerson in late August eliminated the position of the Special Envoy for Climate Change that Obama created to coordinate the role and provide the public face of the U.S. during international climate negotiations. The State Department announced it was cutting the office entirely — along with other special envoys positions — and made it a part of the Bureau of Oceans and International and Scientific Affairs, a lower office that is now being led by an acting assistant secretary.

There are still a few career officials around, but not many. According to E&E News, by the end of August only three skilled staff members remained in the envoy’s office. “The crew that’s there now, while smaller than it was before, has moved through and contributed to the most intensive period in the history of climate diplomacy,” Paul Bodnar, who led climate initiatives on Obama’s National Security Council, told the publication. The question, though, is whether they still have any authority.

Without a functioning State environment office, Trump administration would have to reassign Paris negotiation duties elsewhere. In this case, Trump’s economic advisor Cohn, who favored staying in the agreement in the first place, would lead the renegotiation. Even if Cohn undertakes a good-faith effort to renegotiate, staff is necessary to put forward a credible proposal, quantify it, and then convince other countries they’re better off embracing this new deal — which major allies of the U.S. say they have no interest in doing.

Add to that the mixed signals the Trump administration gives the world: How do you renegotiate a deal when you don’t even show up to the meetings? The U.S. had seven staff registered for a meeting about the Paris agreement this spring, after sending 44 representatives last year. The State Department still hasn’t said who will attend the annual United Nations climate meeting that will begin November 6 in Bonn, Germany.

Obama mobilized many parts of his administration when negotiating the Paris agreement, which came six years after a much greener Obama administration tried to negotiate an ambitious treaty in Copenhagen — only to fail to convince major polluters to come on board. In the subsequent years since Copenhagen, Obama announced a series of bilateral deal with countries that have big carbon footprints, like India, China, and Brazil. These sweetened the prospect of compromising on Paris, helping lead to a major turning point in bridging old divides when China agreed to its first cap on emissions by roughly 2030.

NRDC’s Schmidt couldn’t see how the Trump administration plans on undertaking such a herculean effort, when it’s not even clear what the president will do next, and all his underlings give conflicting messages. “If you’re another country one of your main questions is, ‘Am I talking to someone who can actually influence the president? Am I getting the right person?’ In general when administrations talk, they talk with one voice. And the Trump administration talks with 19 different voices at once.”