U.S. food security, forest health, and the ability of farmers to respond to climate change are all at risk if President’s Trump’s pick to lead the U.S. Department of Agriculture brings climate change skepticism to the agency, agricultural researchers and environmental law experts say.

That concern takes root not only in Trump’s own statements scoffing at climate policy, but also in the words and actions of his nominee for agriculture secretary — former Georgia Gov. Sonny Perdue, who in 2007 resorted to prayer as a strategy to deal with a severe drought Georgia was enduring. 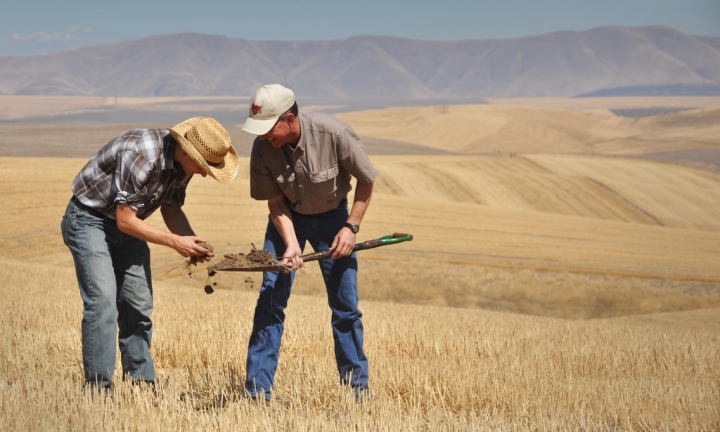 “Snowstorms, hurricanes, and tornadoes have been around since the beginning of time, but now they want us to accept that all of it is the result of climate change,” Perdue, whose Senate confirmation hearing has not yet been scheduled, wrote in a 2014 National Review column. “It’s become a running joke among the public, and liberals have lost all credibility when it comes to climate science because their arguments have become so ridiculous and so obviously disconnected from reality.”

In fact, the science of human-caused climate change is far from a running joke.

Though climate models are less certain about the role of global warming in hurricanes and tornadoes, they suggest that hurricane intensity will increase as the atmosphere warms. Major hurricanes are already becoming more common in the Atlantic, and landfalling typhoons have become more intense in the Pacific, threatening millions of lives in coastal cities.

Responding to climate change is a key mission of the USDA, which is America’s chief supporter of agriculture research, forestry, and rural development. The agency funds millions of dollars of research at land grant universities across the country such as Cornell, Clemson, and Texas A&M to help farmers learn the risks they face from a world that has been largely warmed by pollution from carbon emissions.

The agriculture industry is responsible for about 10 percent of U.S. greenhouse gas emissions causing climate change. If confirmed, the decisions Perdue will make will influence whether farms shrink their carbon footprint and how farms and forests are managed to respond to climate-related disasters.

The USDA’s climate programs extend far beyond farms. As America’s largest forest manager, Perdue will determine the direction of the science conducted by the U.S. Forest Service and whether some of America’s most carbon-dense and diverse forests are clear-cut for timber harvesting or managed to sustain and blunt the impacts of climate change.

“Just about every activity that the USDA regulates is likely to impact climate policy,” said Mark Squillace, a natural resources law professor at the University of Colorado-Boulder. “Forests and soils store vast amounts of carbon. When forests are logged or when they burn, much of that stored carbon is released into the atmosphere. Crop farming also contributes to climate change by releasing large quantities of nitrous oxides, much of it from fertilizers, and animal farming contributes vast amounts of methane, especially from ruminant animals.”

If the USDA dismisses the threat of climate change, “then there is reason for grave concern,” said Michael P. Hoffman, executive director of the Cornell University Institute for Climate Smart Solutions, which focuses on sustainable agriculture.

“Those who grow our food in the U.S. are facing more extreme weather, more flooding and drought, more high temperature stress — in general, more risk due to more variability, more uncertainty,” Hoffmann said. “It will be a travesty if USDA cuts back on its support of climate change research and education.”

Allison Chatrchyan, a sustainable agriculture researcher at Cornell University, said the losses both farmers and the university’s research could sustain if the USDA cuts back on climate funding could be significant. At particular risk are the USDA’s 10 regional climate hubs, she said.

The Obama administration established the hubs in 2014 to coordinate with land grant universities to help private farmers, ranchers, and forest managers adapt to climate change. Through the universities, the hubs help farmers understand how global warming will alter weather patterns and affect their crops and irrigation methods.

“It is unlikely Cornell will get additional funding to work with the hub,” Chatrchyan said. “The hub has told us they will be looking to university partners to carry this work if the hubs are disbanded.” 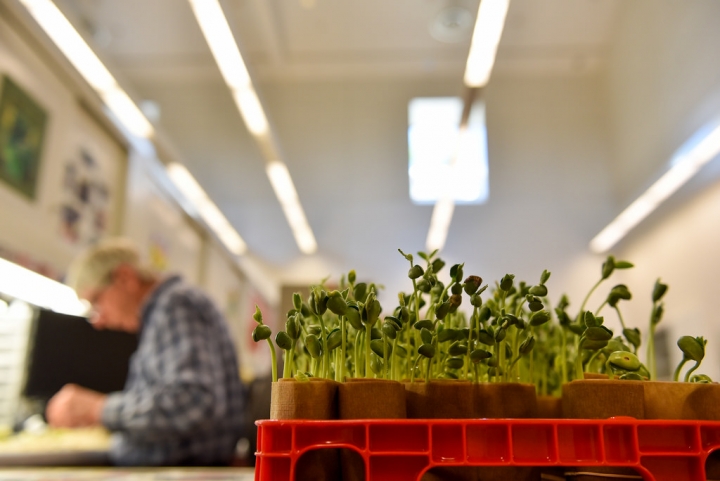 The USDA also provides scientists at land grant universities with small research grants. At Cornell, researchers are using $6 million in USDA grant money to study how climate change is affecting food security, corn crops, trees, and grasses in urban areas, the spread of invasive mussels in New York lakes, the spread of mosquitoes, and much more.

Chatrchyan said that if the USDA shuts off that funding, it would be a huge setback for farmers and the research that supports them.

“We have regions of the country and the world that are going to be less able to produce food because of more extreme drought and higher temps and more pests and disease pressure,” she said. “We have to be innovative. We have to be helping farmers. We can’t step back from that.”

The USDA manages 193 million acres of national forest and grasslands, including the rainforests of Oregon, Washington, and Alaska. Those forests act as large “carbon sinks” because they store more carbon from the atmosphere in tree trunks, roots, and soil than any other type of forest in the country. Altogether, America’s national forests offset and store about 14 percent of U.S. greenhouse gas emissions each year, according to the U.S. Forest Service.

The agency also works with state and local agencies to help manage nearly 500 million acres of local and city forests across the country.

“The U.S. Forest Service is heading in a direction both cognizant of problems posed by climate change in terms of wildfire and bark beetle infestation, and adaptation, resilience, and carbon sinks,” said Jack Tuholske, director of the Vermont Law School water and justice program. “The tone of the administration one week on the ground, they want to go back to the old days when public lands were viewed as commodity producers for private gain.”

Tuholske is referring to statements made by some of Trump’s other cabinet nominees during their confirmation hearings in January. Interior Secretary nominee Ryan Zinke, whose Interior Department is in charge of more federal land than any other, spoke of forests and fossil fuels the agency manages as “assets” to be harvested or extracted.

For decades, the U.S. Forest Service managed national forests mainly for commodity production in the form of timber harvesting, an approach that began to change in the Obama administration, which saw forests as important for their ecological value, Tuholske said.

“The U.S. Forest Service is like a big ship slowly turning,” he said. “It took them 30 years to reach this new vision of the forest as something more than logs on a stump.”

The stakes are high for USDA-managed forests because the way they are managed can help reduce the risk of catastrophic wildfire, promote biological diversity, and store atmospheric carbon in temperate rainforests, such as those in western Washington state and the panhandle of Alaska.

“Federal lands managed by the USDA are increasingly a cost center for the effects of climate change on the United States,” said said Jayni Hein, policy director for the Institute for Policy Integrity at the NYU School of Law. “With more severe droughts and a warming climate, an increasing share of the U.S. Forest Service budget is directed at fighting wildfires. The new administration must keep its eyes open and focused on this growing, costly threat.” 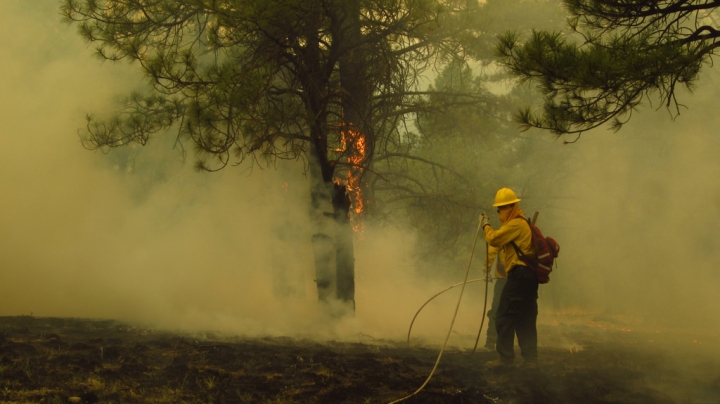 Firefighting made up 16 percent of the U.S. Forest Service’s budget in 1995, but as climate change led to longer and more severe fire seasons, the share of the agency’s budget dedicated to fighting fires ballooned to 50 percent by 2015 — roughly $1.2 billion.

Fire seasons now average 78 days longer each year than in 1970, according to the Forest Service.

The wildfire threat will not be reduced by efforts in Congress or in the Trump administration to increase logging, said Dominick DellaSala, chief scientist at the Geos Institute, a climate change think tank.

“As climate change results in more extreme fire weather in places, throwing more money at the problem won’t result in a fire-fix as climate increasingly becomes the top-down driver of fire behavior,” he said.

The Obama administration angered conservationists last year when it approved a plan to log some old-growth rainforest in southeast Alaska’s Tongass National Forest, which is America’s largest and one of its most pristine national forests.

“Any additional logging that could come under a Trump administration or congressional efforts to give away large portions of the Tongass to the state of Alaska would make matters even worse,” DellaSala said. “I worry about how forest plans will be revised in this administration, which has signaled its intent to roll back the clock to unsustainable logging levels.”

It’s unclear how far Perdue’s USDA could go to roll back forest protections because many of them are mandated by law and regulatory changes require a time-consuming process to implement.

The law that governs how the USDA manages national forests mandates that forests be managed sustainably — not just for timber harvesting, Hein said.

“This requires attention to both the impact of climate change on our national forests and the preservation of these forests as carbon sinks,” she said.