The medium by which most Americans get their news is sorely failing them in one very important category: climate news.

According to a report released Monday, big-name television networks — namely, ABC, CBS, NBC, and Fox — decreased the amount of airtime they devote to climate change by five percent from 2014 to 2015, despite public promises to cover the issue more. In 2015, climate-related issues took up just 146 minutes total of the network’s evening and Sunday news shows. 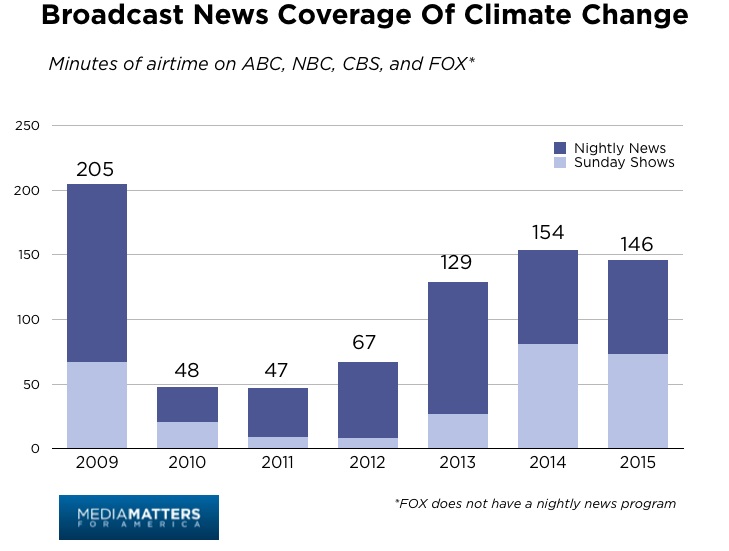 The problem isn’t just the lack of climate segments on television, either. It’s that what coverage there is is misleading. In 2015, the major networks aired a total of nine segments on Sunday and nightly shows that included climate science denial.

On the Sunday shows in particular, the number of segments featuring climate science denial increased from the previous year, from four segments in 2014 to six in 2015. 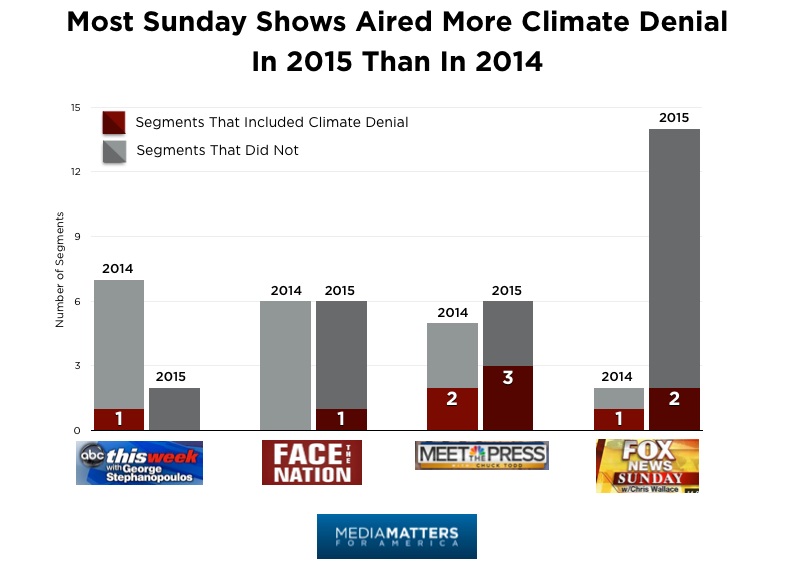 The numbers are especially significant when you consider the fact that television is the staple of the U.S. news diet — according to the American Press Institute, the TV is the device Americans use most frequently to get their news. Survey respondents preferred TV news over other sources, like smartphones or tablets.

But these days TV audiences are skewing older and older. In 2014, the median age of a broadcast or cable television viewer was 44.4 years old — a 6 percent increase from four years previous.

And TV viewers tend to be more conservative — 2013 Gallup poll found that Republicans are more likely than Democrats or independents to report that TV is their main source of news. Republicans most often chose Fox News when describing their main news source — the same network that, according to the Media Matters report, included climate denial or criticism of climate actions in nearly every segment it ran related to climate change.

Luckily, the younger generation may not actually be the audience for these segments. More and more, millennials are cutting the cord, leaving cable for streaming services instead. A 2015 survey found that one-fourth of respondents ages 18 to 29 have never had a broadcast TV subscription.

In other words, millennials may soon be too busy binging House of Cards to catch the latest idiocy on Fox news.

Wanna see what happens when you rely on the fossil fuel sector and slash taxes? Check out Louisiana