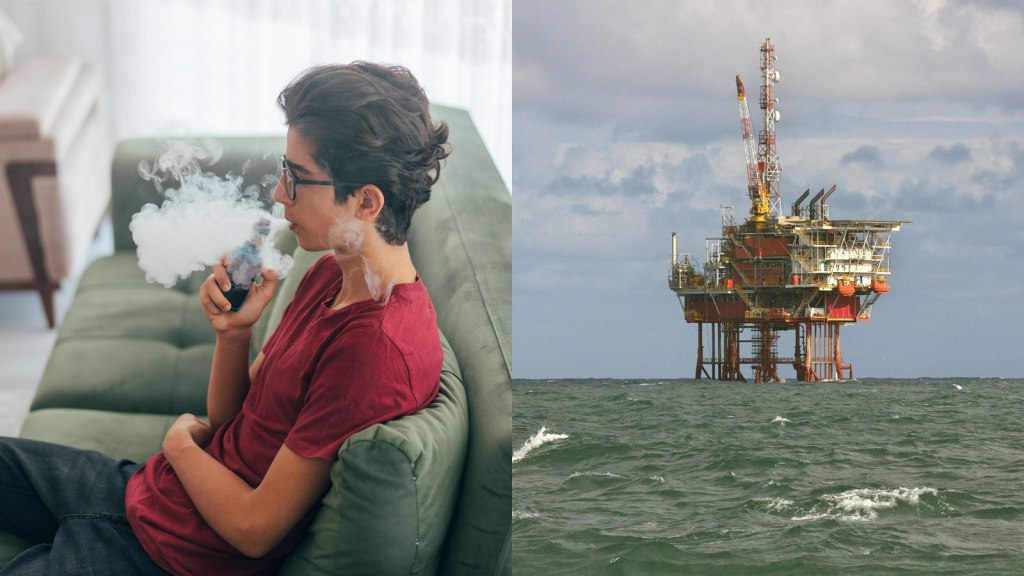 The Sunshine State is no stranger to high drama come election season. This year, Florida is the place to watch if you’re curious how toxic algae has changed the Senate race or how Puerto Rican émigrés are shaping policy on the mainland. It’s also the place to be for voters with a disdain for both fossil fuels and e-cigarette vapors — they’ll get a chance to hit two birds with just one ticked oval on the ballot.

If passed, Amendment 9 would ban both offshore drilling and indoor vaping in the state constitution. A series of unusual events has led to the pairing, which only could have happened in Florida.

Florida is the sole state that appoints a commission with the power to refer constitutional amendments to the ballot. This Constitution Revision Commission only forms once every 20 years — and this is the lucky year. It exercised a unique power: “bundling” several proposals that span multiple issues into a single amendment. In contrast, if a proposed amendment were to make it to the ballot via petition, it’s bound by a “single-subject rule” aimed at preventing “log-rolling” — forcing voters to compromise one issue for another, or leading an unpopular measure to success by tying it to a more likable cause.

“Grouping some ideas which share common elements is for the benefit of the voter,” Brecht Heuchan, chair of the commission’s Style & Drafting Committee, said in a press release. “Grouping some ideas together keeps the ballot from becoming too lengthy to complete.”

The commission is now defending that reasoning in court after a retired Florida Supreme Court justice challenged six amendments on the ballot — including Amendment 9 — and charged the commission with “a form of issue gerrymandering.” In early September, a circuit judge sided with the plaintiff and ruled to have the amendments taken off the ballot, but Florida Attorney General Pam Bondi quickly appealed.

“I’m hopeful and I have every reason to believe it will be on the ballot from November,” Lisa Carlton, author of the proposal to limit where e-cigarettes can be used, tells Grist. “We’ll have to wait and see what the final decision is.”

Carlton, a former Republican state senator, was appointed to this year’s Constitution Revision Commission by Governor Rick Scott. When it comes to pairing her proposal with a stop to offshore drilling, she’s enthusiastic.

“The issues together send a message of clean air, clean water,” says Carlton, who believes her original proposal encompassed both health and environmental benefits. “I cannot think of anything more important than protecting our near shores in Florida,” she says.

Others are worried about marrying the two issues. The Florida League of Women Voters’ endorsement of the amendment comes with a caveat: “Our concern for the environment overrides our concern about putting vaping in the Constitution.”

“Frankly, bundling offshore drilling with vaping — it’s laughable,” says Patricia Brigham, president of the Florida League of Women Voters. Asking Floridians to vote on an amendment that encompasses unrelated issues puts voters in a difficult position, she says. It also makes the amendment harder to understand.

Another pairing that has left some voters scratching their heads is an amendment that addresses both college fees and death benefits for spouses of first responders and military members killed in the line of duty.

Manley Fuller is the president and CEO of Florida Wildlife Federation, the organization that wrote the language on offshore drilling now included in Amendment 9. He wasn’t happy about the bundling at first, either — but if his organization was going to be forced to tango with anybody, he’s glad it happened to be the vaping measure.

“There were other [proposals] which were much more complicated and very divergent,” Fuller says. “Vaping was probably the least objectionable.”

It’s been a long battle to stop offshore drilling. Only recently has it become a cause with bipartisan support. Rick Scott opposed a similar constitutional ban in 2010, but he’s now running to keep his seat on a platform that challenges the Trump administration’s attempts to expand offshore drilling. If passed, Amendment 9 offers permanent protection of the state’s shores and marine habitats.

“The reason we need to put it in the constitution is to send a clear message that Floridians do not want oil or gas drilling in our state marine waters,” says Fuller.