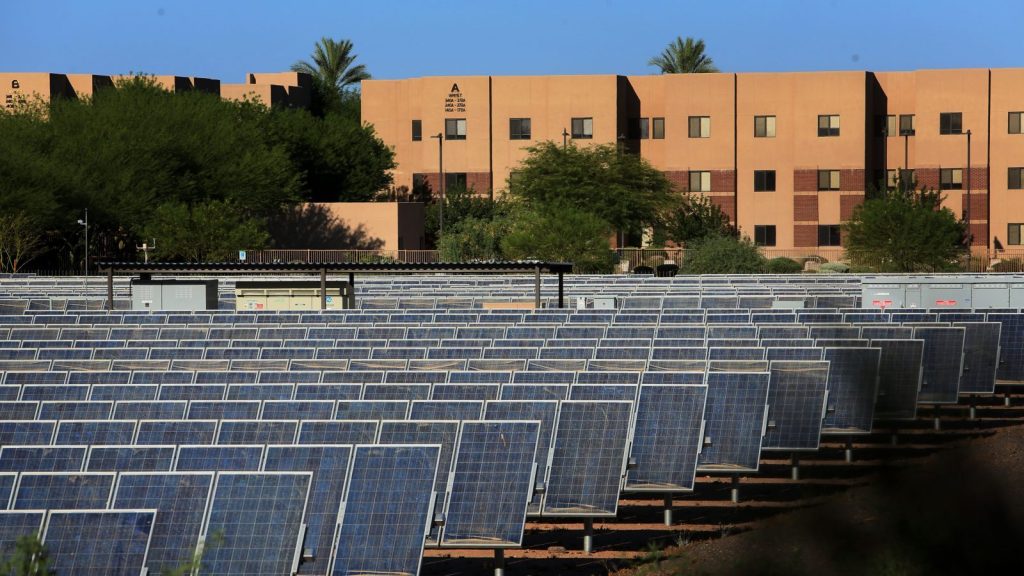 With the GOP controlling the executive branch and Congress, that means state-level ballot initiatives are one of the few tools progressives have left to advance their own energy agendas. Twenty-four states, including most Western ones, permit this type of “direct democracy,” which allows citizens who gather enough petition signatures to put new laws and regulations to a vote in general elections.

“In general, the process is used — and advocated for — by those not in power,” explains Josh Altic, the ballot measure project director for the website Ballotpedia. Nationwide, 64 citizen-driven initiatives will appear on state ballots this November, and in the West, many aim to encourage renewable energy development — and reduce reliance on fossil fuels.

Proposition 127, known as the Renewable Energy Standards Initiative, would require electric utilities to get half of their power from renewable sources like wind and solar — though not nuclear — by 2030. California billionaire Tom Steyer has contributed over $8 million to the campaign through his political action organization, NextGen Climate Action, which is funding a similar initiative in Nevada.

The parent company of Arizona Public Service, the state’s largest utility, tried to sabotage the initiative with a lawsuit arguing that over 300,000 petition signatures were invalid and that the petition language may have confused signers into thinking the mandate includes nuclear energy. APS gets most of its energy from the Palo Verde nuclear plant, and the initiative could hurt its revenue.

The progressive group Colorado Rising gathered enough signatures to put Proposition 112 — the Safer Setbacks for Fracking Initiative — to a vote this year. It would prohibit new oil and gas wells and production facilities within 2,500 feet of schools, houses, playgrounds, parks, drinking water sources, and more. State law currently requires setbacks of at least 500 feet from homes and 1,000 feet from schools. It’s opposed by the industry-backed group Protect Colorado, whose largest funder, Anadarko Petroleum Corporation, attracted scrutiny last year after two people died in a home explosion linked to a leaking gas flow line from a nearby Anadarko well.

Amendment 74, sponsored by the Colorado Farm Bureau, would allow citizens to file claims for lost property value due to government action. It is largely seen as a response to Proposition 112, which the Colorado Oil and Gas Conservation Commission says would block development on 85 percent of state and private lands. The Farm Bureau’s Chad Vorthmann says Amendment 74 would amend the state Constitution to protect farmers and ranchers who wish to lease their land for oil and gas from “random” setbacks.

Critics argue that the amendment could lead to unintended consequences. In Oregon, for example, a similar amendment passed in 2004, resulting in over 7,000 claims — totaling billions of dollars — filed against local governments, according to the Colorado Independent. Voters then amended the constitution in 2007 to overturn most aspects of the amendment and invalidate many of these claims.

Two energy-related questions will appear on Nevada’s ballot: Question 6, known as the Renewable Energy Promotion Initiative, and Question 3, the Energy Choice Initiative. Funded by Steyer’s NextGen Climate Action, Question 6, which would require utilities to get 50 percent of their electricity from renewable sources by 2030, faces little formal opposition.

Question 3, however, has attracted more attention — and controversy. The initiative was approved in 2016, but because it would amend the state constitution, voters must approve it a second time. It would allow consumers to choose who they buy power from. It’s spearheaded by big energy consumers, including Switch, a large data company, and luxury resort developer Las Vegas Sands Corporation, which want the freedom to buy cheaper power on the open market without penalty. But environmental organizations, including the Sierra Club and Western Resource Advocates, say the initiative threatens clean energy development. NV Energy, the regulated monopoly that provides 90 percent of Nevada’s electricity, has several solar projects planned but has said it would abandon some of these projects if the initiative passes due to costs.

Washington could become the first state to pass a so-called “carbon fee.” Initiative 1631 would create funding for investments in clean energy and pollution programs through a fee paid for by high carbon emitters like utilities and oil companies. In 2016, a similar initiative lost by almost 10 points. However, many former opponents are now supporters.

What changed? The 2016 initiative would have imposed a revenue-neutral tax instead of a fee, meaning the money generated by the tax would have been offset by a sales tax cut. Environmental groups felt that the initiative didn’t do enough to promote clean energy or to address the impacts of climate change on vulnerable communities. But the new fee would bankroll clean energy projects, as well as help polluted communities. The oil and gas industry is funding the opposition campaign, with Phillips 66 contributing $7.2 million so far.