The Sierra Club has obtained a giant new trove of documents (24,000 pages) that provides even more evidence of the unprecedented level of secrecy Administrator Scott Pruitt has imposed on the EPA.

The emails, first reported by the New York Times, reveal his staff going to great lengths to limit most press access to his events — save for those whom they determined were with “friendly” media. They also show staff preventing questions from the public at his events and exerting more control over public records requests.

Pruitt’s troubles with transparency are well-documented. In the past, his staff defended his unusual practices, such as not advertising his schedule, as “security concerns.” But these emails detail more preoccupation with avoiding distractions at events than any real worries about his personal security.

They also rebut other arguments that have been advanced by the EPA to justify the pervasive lack of transparency. In response to a 2018 complaint from the Society of Environmental Journalists about barring some reporters from press lists and his events, EPA’s chief spokesperson Liz Bowman (who recently resigned) claimed that the EPA offered an “unprecedented amount of access.” These emails clearly detail otherwise, as they show EPA staff ensuring that Pruitt’s events were not advertised ahead of time and were closed to the general public.

Of course, not everyone has had trouble gaining access to Pruitt. The emails also demonstrate how EPA staff fulfilled requests from industry executives and groups to meet with the EPA administrator, closed to the public. In one exchange, Pruitt’s scheduler thanked the conservative think tank the Heritage Foundation for offering remarks that would be “helpful in preparing talking points” ahead of an appearance.

Here are 10 things we’ve learned so far from the new documents:

1. EPA insisted on a town hall without questions from the public

2. The media divides between “friendly” and “unfriendly”

Pruitt’s EPA often distinguished between friendly and unfriendly media and targeted media invitations to outlets it viewed as sympathetic to the administrator. In one instance, Tate Bennett, an EPA associate administrator, asked if the Missouri Network Television was “the friendly outlet.” The founder of the Association of Missouri Electric Cooperatives (AMEC), Barry Hart, noted that a tweet about the event meant “the world now knows including all news media … even unfriendly.”

3. The Heritage Foundation helped Pruitt with his talking points

The conservative think tank sent Pruitt talking points ahead of a speech to its “Resource Bank” annual event. The angles Heritage’s event planner Jessica Larsen described for his speech included:

He should remind the audience of some of the fights he was engaged in with the Obama Administration (and just how bad it was). His selection as EPA Administrator (and maybe mention Senator Sessions as AG and others now in the Administration who have fought hard to rollback and contain the power of the federal government) should give us hope.

The EPA’s Millan Hupp thanked Heritage, copying a speechwriter for Pruitt in a note that said the staffer “will find these remarks helpful in preparing talking points.”

4. “Just Pruitt with the executives”

After his confirmation last year, Pruitt spoke at an executive roundtable in Oklahoma, to a slew of executives associated with the Oklahoma Oil and Gas Association (OKOGA) including Devon Energy, Enbridge, Halliburton, General Electric, Mustang Fuel, and BP.

The National Turkey Federation sought access to Pruitt by pitching it as “a friendly group who is excited to have the Administrator at EPA.” The audience, it noted, included roughly 150 turkey executives and the heads of several Fortune 500 companies.

5. A request to take down a public schedule put of concern over a “session disrupted”

In an exchange with the conservative legal group the Federalist Society, an EPA official expressed concern that the details of Pruitt’s speech were posted online, worrying that they may cause the event to be “disrupted by those who see that the Administrator is attending and want to distract from the event.” The EPA official was eventually reassured, noting “Fed Soc does meticulous vetting of his registrants.” 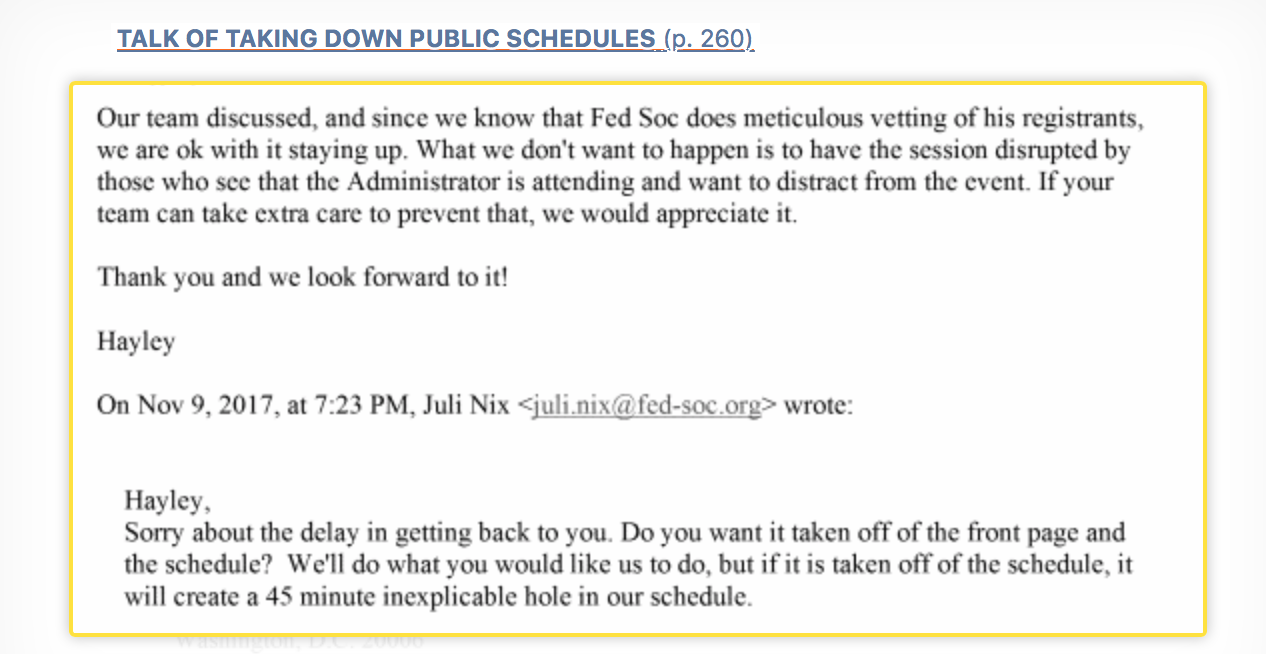 6. Pruitt wanted a political favor from a person affiliated with a climate denier group

Todd Dobson, an Oklahoma banker with MidFirst Bank and on the board of the Oklahoma Christian University, sent along a request last May from the Global Warming Policy Foundation. GWPF, a conservative think tank based in the United Kingdom that promotes climate skepticism and denial, wanted Pruitt to deliver its annual lecture, after having already hosted Trump’s EPA transition chief Myron Ebell. It’s unclear if the EPA seriously considered the request, but the email from Dobson reached Pruitt’s scheduler Sydney Hupp. Dobson said in his note Pruitt was “trying to get with me to discuss his future” before he became EPA chief.

7. “We will not advertise this event directly to press”

At a March 31 Federalist Society event last year, the conservative legal association assured the EPA “we will not advertise this event directly to press.”

8. EPA wanted press coverage after Pruitt’s events — not before

EPA staffer Tate Bennett replied to a confused Toyota vice president of government affairs, who thought “you all did not want any press coverage” of an event. Bennett clarified they wanted “press after we leave. Not before.” The strategy was consistent with the general approach the EPA used when revealing Pruitt’s travels only after they had already occurred — like his now-infamous trip to Morocco in December.

Last June, Pruitt’s office asked for pending Freedom of Information Act disclosures to be sent to political staff for review 48 hours before they were made public. That alone may not be troubling, but Politico recently found additional layers of review Pruitt’s team has added to prevent documents from being released.

10. Why he keeps going back to Le Diplomate

Pruitt reportedly once wanted to use flashing lights and sirens to get to his dinner reservation at a trendy D.C. restaurant, Le Diplomate. He also dined at the French restaurant the evening Trump announced he would pull the United States from the Paris climate deal. Now we know why he kept going back:

Despite Trump, more Republicans grasp that climate change is our fault