It’s been a hand-wringing, hair-pulling week among the rank and file of many federal bureaucracies, perhaps best epitomized by the ongoing battle at the Environmental Protection Agency. The new administration’s actions amount to a vote of “no confidence” in the agency’s mission: Trump appointed a prominent climate change skeptic to head the agency’s transition, and his nominee for EPA administrator, Scott Pruitt, is a man who brags about his yearslong efforts to undermine the EPA as attorney general of Oklahoma. In spite of this, several leaked communications obtained by Slate suggest that Trump’s transition team is attempting to frame the anxiety emanating from the agency as normal transition woes, rather than serious concern for the future of the agency. Given the number of leaks already emanating from the agency, these attempts don’t seem to be working.

It was no great surprise when news reports began surfacing last week of a clampdown at the agency: a freeze on all hiring, grants, and spending; a complete gag order; and rumors that various websites and their attendant data might be removed from public view. Donald Trump and his advisers had gleefully promised to throttle environmental protections many times during the campaign, and the leaked information seemed like evidence that the process had begun. For staffers living through it on the inside and sympathetic observers on the outside, it seemed to confirm their worst suspicions — the EPA could be neutered before Scott Pruitt is even confirmed as its director.

In a statement sent out Friday, apparently to all 15,000-plus EPA employees, acting EPA administrator Catherine McCabe attempted to quell some of the hysteria surrounding the transition. It had been a busy week, McCabe wrote, “educating the President’s new transition team about many aspects of the Agency’s programs and operations. This is standard practice for a transition, as are many of the government-wide and agency-level actions the new Administration has taken this week.”

McCabe went on to describe the hiring freeze, the “pause” in communications, and a hold on new regulations as routine steps for any incoming administration. And on the topic of halting all grants and contracts, which fund things like state programs for air and water quality monitoring and had been heavily reported in the press, she sought to correct the record. “As of today, we have completed review of our grant programs,” she wrote (emphasis hers). “All grant programs are proceeding normally, and nothing has been delayed.” (And the review of contracts, she added, was nearly complete.)

In a video linked in her statement and publicly posted to YouTube, she reiterated the same points, at greater length and in the tone of a school principal trying to get the students on her side. “This week you have also seen or heard both communications and reports in the press concerning some other interim actions directed by the new administration,” said McCabe, wearing a jacket and scarf tuned to the colors of the EPA flag behind her. “Much of what you are hearing is perfectly normal for a new administration.” Some of the transition changes had been “particularly challenging and noticeable,” she allowed. “But other than the government-wide directives on hiring and regulations, the administration has not issued any additional written directives specifically to EPA.”

McCabe, a career government worker who spent 22 years as a manager and attorney in the Department of Justice’s Environment and Natural Resources Division before moving into a series of senior management roles at the EPA in 2005, was trying her best to calm the nerves of a workforce whose despair and anger have, by all accounts, been growing by the day. Anonymously sourced statements attributed to EPA staffers have been making the rounds on social media like missives from prisoners to the outside world. There seems to be a darkening view inside the agency.

But, as has so often been the case in this chaotic transition, McCabe’s efforts at morale-boosting were soon undercut by a Trump appointee, in this case Don Benton, a scandal-prone former state senator from Washington state who is serving as a senior White House adviser on the EPA transition team. Benton, who has been on the job for a week, sent a staff-wide email Monday morning that highlighted the “important nature of the work that is done here at EPA” and attempted to establish a chummy bonhomie with “the many career professionals here at the EPA who have been working with me.” He then took a page out of his new boss’s playbook and launched into sharp criticism of the press, noting that “due to the important nature of the work that is done here at EPA, we are falling under a greater media microscope than most agencies. I, like many of you, am surprised each morning by what I read in the newspaper and see on TV news shows, because much of what we see is just not accurate.” (Emphasis his.) 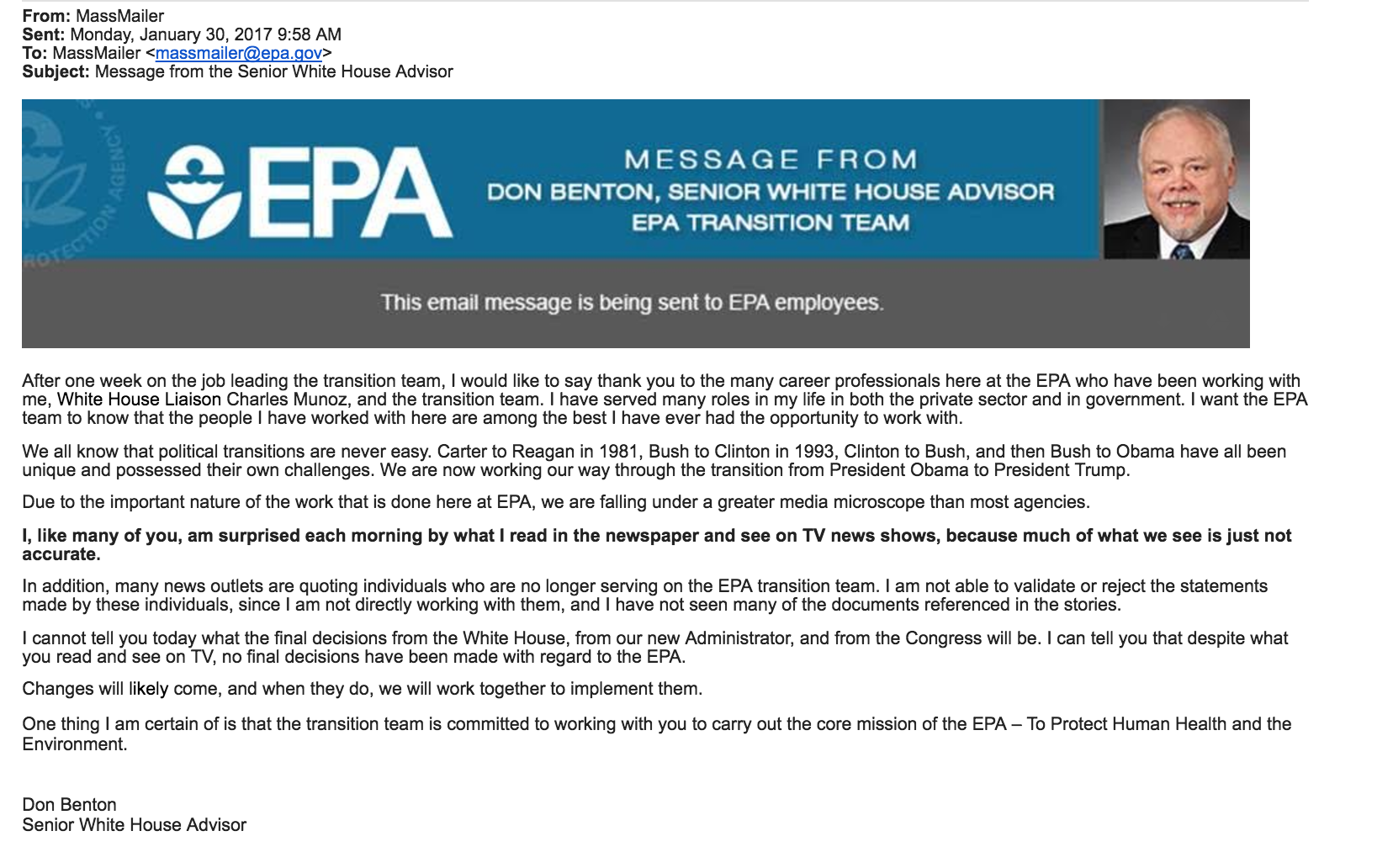 Response to media requests on science at the EPA

Several articles last week reported that political appointees at the EPA would be vetting all scientific research and data before it is made public. These articles are inaccurate.

The context of the discussion that led to the articles was about changes to the EPA web page and the process that will happen to refresh the web page.

As most people can understand, the new Administration will make changes to the EPA web page just as previous administrations have done.

At this point, we cannot say what the final changes will look like until there is a thorough review of the website.

Claims that science and research will be deleted are simply not true. Because there are federal record keeping requirements, there is a process in place for archive Federal website information so it remains available to the public if it is removed from the active pages.

He failed to mention that the articles were the result of his own misstep — while speaking to NPR last week, he suggested that going forward, political appointees would have a say over the EPA’s scientific research. He has been walking back that statement ever since, as evident in this AP story.

It’s strange, though on message, for Trump surrogates to suggest that the cause of distress is inaccurate media reports. For one thing, Ericksen’s missive may have been a miscommunication, but the fault does not seem to lie with the media but with Ericksen himself. That Ericksen would even make such an error must not sit well with an agency on the verge of being led by a man who has previously attempted to eviscerate it. (Nothing in his confirmation hearings indicate that he’s changed his position.) Even stranger is to decry inaccurate news while trafficking in deliberate vagueness. “I am not able to validate or reject the statements” made by other members of the transition team, Benton wrote, before noting that “no final decisions have been made” and “changes will come.”

All this dissembling and media-shaming has done little to help McCabe through her tricky task. McCabe correctly points out that when it comes to holding Trump accountable, it will be critical to differentiate the truly appalling things — and there’s no shortage — from the relatively commonplace, and she rightly puts things like the grants and hiring freeze in the latter category.

The daily drumbeat of small indignities and distractions may be dominating the news cycle, but these are minor when considering the much larger uncertainty looming in the background. Given Pruitt’s record and the messaging coming out of the Trump administration on environmental matters — for example, an executive order that demands that for every new regulation passed, two must be eliminated — it seems obvious that the future of the agency seems to depend upon the resiliency and dedication of EPA staffers who do the day-to-day, unglamorous work that benefits us all. McCabe attempted to tap into this in her message: “I am one of you, an EPA career colleague,” McCabe said, reiterating a sincere belief in the EPA’s mission, in her people, and in the institutional solidity of agencies like hers.

It’s unclear whether her staffers even paid attention — of the 15,000-plus EPA staffers, her video had only about 2,100 views at press time. McCabe will only be in her role for a short time, and as one EPA source suggested to me, perhaps staffers were simply too busy doing their jobs to tune in. There are studies that need to be drafted, permits that need to be approved, grants that need to get out the door, and doing that work well is, in itself, its own form of resistance. McCabe understands this. “Now it is more critical than ever that you continue your important work and stay focused on our critical mission of protection public health and the environment,” she said.

If they needed a reminder of what was at stake, one came last night in the form of Trump’s Supreme Court nominee, Neil Gorsuch. For long-serving EPA hands, his name no doubt dredged up painful memories: His mother, Anne Gorsuch, was President Reagan’s first EPA administrator from 1981–1983 and is thought of as one of the worst to ever inhabit the role. Many see that dark period at the EPA as a possible analog for what the agency now faces, as the elder Gorsuch sought to dismantle the agency from within, slashing budgets, staff, and enforcement, giving polluters free rein. Donald Trump can’t abolish the EPA, but he could follow the Gorsuch playbook. If there’s any consolation in the Gorsuch story, it’s that she was eventually forced to resign amid public and media outcry. Of course, this was accomplished in part via an investigation by the Democrat-controlled Congress that turned up collusion with industry and possible misallocation of funds. As this story was going to press, Senate Democrats were boycotting Pruitt’s confirmation hearing.

The EPA has long been a punching bag for Republicans in Congress, and in some ways, it’s particularly vulnerable to attack — it is easy to disconnect its work from tangible benefits. But all Americans have benefited greatly from the EPA’s work in the post-Gorsuch decades. Most support the agency’s mission: clean water, clean air, and for polluters to be held accountable, even if they don’t want to pay for it. But until the public, the media, and especially Congress make their voices heard, this could get ugly.

Trump’s ban puts a chill on science and cleantech