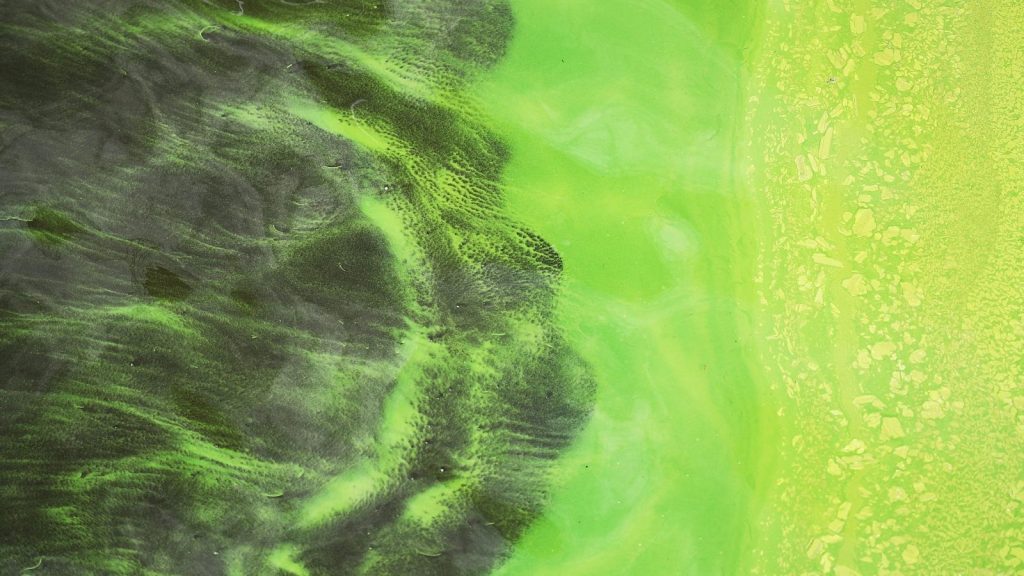 ExxonMobil scientists are working tirelessly on developing a low-carbon fuel to change the way we power everything from cars to jet planes. Algae, that green goop that overruns beaches and thrives in warming climes, could play a pivotal role in lowering greenhouse gas emissions, the company says. Exxon has invested millions in the stuff, and flooded its social media pages with ads about its promise.

Not too long ago, Exxon was spreading climate disinformation, despite knowing about the dangers of global warming since the 1970s, and avoiding investments in more traditional forms of renewable energy, like wind and solar. So what’s with the change of heart? Is Exxon really trading in oil barrels for algae?

Not so fast, says Ed Collins, a research analyst at U.K.-based nonprofit InfluenceMap. Exxon’s algae biofuel initiative is, in many ways, a lobbying tactic, Collins claims. The effort signals to politicians and the public that the company is actively working on lowering its emissions, even though its bottom line — which is dependent on finding and selling oil and gas — is still ultimately at odds with that goal.

It’s been a rough few years in the public eye for Exxon. The #ExxonKnew investigations exposed the company’s cover-up of climate science. Now, cities and states across the country have filed lawsuits seeking to hold the company (and its competitors) accountable for its contributions to climate change. While Washington, D.C., has hit the brakes on implementing environmental regulations that could hurt its business since President Trump took office, states like California and New York are plodding ahead.

And this is key to understanding the marketing push, Collins says. “If you’ve got these feel-good, upbeat adverts about tech innovations such as algae,” he says, “then you have the impression that the climate issue is being dealt with without having to resort to regulation.” Who needs policy, goes the thinking, when the free market can save us all?

As for the algae itself? There’s good evidence that producing algae on a large scale is still prohibitively expensive. Cultivating it commercially requires a massive amount of fertilizer, land, and CO2. One simulation showed that producing enough algae biofuel to supply the E.U. with 10 percent of its transport fuel would require ponds triple the size of Belgium.

Exxon is developing genetically modified strains in an attempt to sidestep these limitations, but this comes with its own set of risks, says Kevin Flynn, a bioscientist and professor at Swansea University, who studies microalgae production. Making algae on a commercial scale “requires a truly massive system,” he says. “And it WILL escape.” (Flynn coauthored a study in 2012 that showed that rogue GM algae could threaten waterways and even entire ecosystems.)

There are, of course, renewable technologies that already have a proven track record of success. Wind and solar energy are both good bets, but Exxon hasn’t expressed much interest in investing in them. “We chose not to lose money on purpose,” former CEO Rex Tillerson said in 2015, when asked why Exxon hadn’t jumped on the clean-energy bandwagon.

Exxon isn’t the only oil and gas company cooking up shot-in-the-dark solutions to rising emissions. Shell’s “Make the Future” campaign is practically a carbon copy of Exxon’s algae initiative, minus the algae. What breakthrough low-carbon technology are they promoting? Things called “kinetic tiles,” which allow people to “capture the energy of footsteps and convert it into electricity,” the company’s website says.

Back at Exxon, the mammoth costs and significant risks associated with algae aren’t stopping the conglomerate from plowing ahead. At least according to their social media presence.

But what ExxonMobil is telling its Facebook followers might be different from what its telling its employees. The company and the firm it partnered with for its algae research, Synthetic Genomics, did not respond to requests for comment. But three Exxon employees I talked to (a phone operator, someone in the marine fuels and lubricants department, and a media liaison) weren’t aware that the company had an advanced biofuels and algae research portfolio.

In March, the company claimed to have developed a new technological breakthrough that “could lead” to 10,000 barrels of algae biofuel per day by 2025 . “Is it possible?,” Flynn says of Exxon’s ambitious target. “Yes, on the basis that it is not impossible! Is it sensible or commercially viable, I would say no and no.”